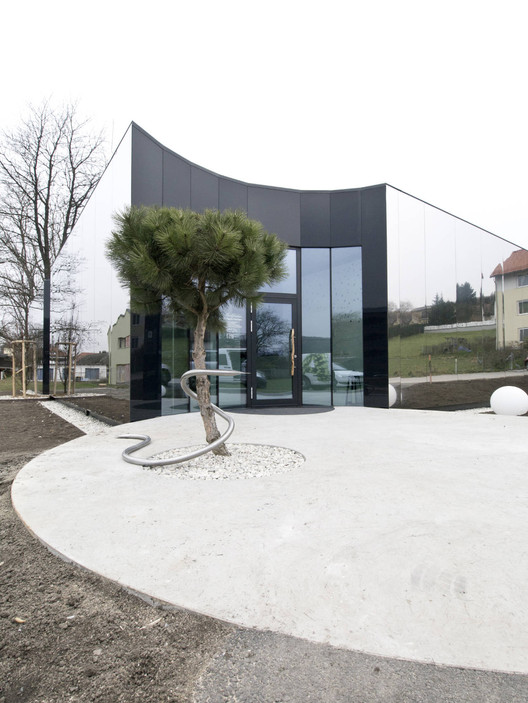 Dr. Fehrmann decided to build her new practice in the centre of the lower Austrian community of Kasten. The community’s centre consists of buildings which surround a green park on three sides. On its fourth side, the park opens up towards agricultural fields and meadows. The premises lie on the edge of the park where its green spaces turn into agriculture. Keeping the valuable urban quality of the continuous green space demands a certain concept in which the building is not to be seen as such, so as not to disturb the geographical connection between the two green spaces.

The overlapping of the practices’ orthogonal, rational room layout with the romantic and free arrangement of the old tree population on the floor plan leads to a geographical penetration between trees and building. The circular tree discs form indentations in the outer shell and round courtyards inside the building. Mirror façades create an additional interconnection between building and park. The park visually doubles in size with its mirror image. The duality between building and nature disappears; the building loses its independent presence and coalesces with its surroundings. This leads to an extension and new interpretation of the green space while at the same time the service infrastructure becomes denser and positively enlivens the community’s centre.

The outer façade of the solid single-storey building consists of a curtain wall made of synthetic aluminium composite panels with a reflective stainless steel surface. The building is entered via a circular indentation on the corner. Via the foyer, reception and waiting room, one reaches the circular inner development which runs around the larger courtyard. All of the practice’s rooms lead to the completely glazed gallery with its views and exits to the courtyard. From there, two smaller circular rooms (“subcircle distributors”) develop further rooms. Each one is exposed according to the concept of overlapping rectangular and round forms via circular shapes.

A shady plane tree with three trunks was planted in the big inner courtyard; it being the tree under which Hippocrates had taught his pupils the art of medicine. A small European black pine was planted in the circular concrete entrance area with its swirl finish. The pine’s trunk metaphorically forms the stick around which the Aesculapian snake wiggles, the symbol of human medicine. The remaining tree discs with their gravel surface contrast with the surrounding greenness.

Pyramid shaped hornbeams were planted in the two smaller circles. An umbrella bamboo hedge was planted to be used as a shield around the big circle in front of the two consulting rooms and the big south-facing circle includes an existing fruit tree as part of the external design. 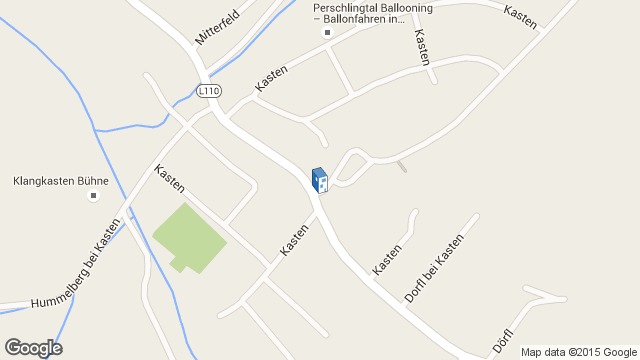