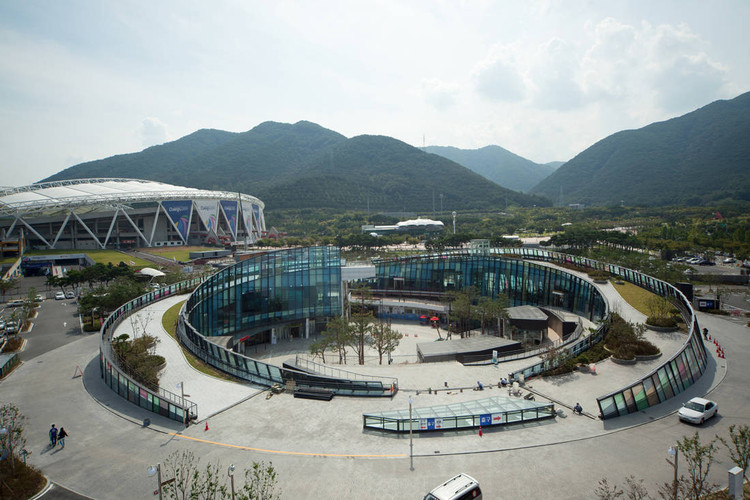 Initiated as a competition to revitalize an underutilized parking lot adjacent to the Daegu World Cup Stadium, Jerde was commissioned to design the project upon submitting their concept for a highly iconic, mosaic of surfaces and organic forms inspired by Daegu’s own textile industry. The design was further inspired by the Daegu World Cup Stadium as a symbol of global unity— the surface mosaic of the new space acting as a metaphor for the interweaving of the diverse cultures of the world who will visit this new social realm and central hub of entertainment, exhibits, dining, and sports activities.

Further channeling the needs of the local people, Daegu Mosaic Gardens is designed as a self- sustaining environmental, cultural, and artistic collection of indoor/outdoor community space expressed through living gardens, rooftop parks, water features and landscaping that transform the area into an urban oasis. Connective and communal, Daegu Mosaic Gardens transforms the area into more than just a sports-scape, but rather, an active new sequence leading visitors from the World Cup Stadium, to the subsidiary stadium and the future baseball stadium, through a textural public promenade of social activity.

Mosaic Gardens is Jerde’s second South Korean project to open in August 2011. Daesung D3 City, a major mixed-use, transit-oriented development in Seoul, opened on August 26. It is also the second project Jerde has completed with developer Dosi&Saram Co., Ltd., after previously being commissioned to design City 7 Mall in Changwon which opened in 2008 and has been a resounding success as the most popular retail and leisure center in the area.

To date, the firm has led design on more than 25 projects throughout the region, including D3 City (2011) and Star City (2008) in Seoul; Changwon City 7 (2008); Habjung in Seoul, scheduled for completion in 2012; and Eunpyung New Town, scheduled for completion in 2014. With Jerde’s experience in the South Korean market since their first South Korean project in 1996—the design for the retail and entertainment component of Samsung’s headquarters—and their established expertise in retail entertainment, The Jerde Partnership has continued to set precedent for urban developments worldwide, demonstrating with Daegu Mosaic Gardens the true potentials in culture-based design.

Jerde’sDaegu Mosaic Gardens brings a stunning 50,000 square-meter entertainment retail complex connected to the Daegu World Cup Stadium that will enhance the public’s experience at the international sports venue. Inspired by the stadium’s iconic curved roof which symbolizes the bringing together of people from around the globe, Mosaic Garden’s exterior walls are covered with unique and colorful mosaic patterns that are a metaphor for the world’s numerous cultures. This distinct architectural mosaic on the exterior walls is influenced by the region’s prominent textile industry and colorful patchwork fabrics.

The new complex rises out of the stadium’s parking lot in a large spiraling form with retail and entertainment space occupying two levels below ground. A series of landscaped pedestrian walkways and elevated parks create a continuous exterior and interior route linking the entertainment and retail space to the surrounding sports complex, which also contains a second stadium and future baseball stadium.

The center piece of the retail and entertainment complex is a Water Garden, a landscaped sunken outdoor courtyard with a large water feature that offers a new community gathering area for events and activity. The shops, restaurants and entertainment venues are arranged in districts around the Water Garden, with radial ‘alleys’ and glass curtain walls providing natural light and views of the garden space from multiple locations within the underground areas. The highly anticipated entertainment zone is anchored by a 1,400-seat flexible concert and event venue, along with six cinemas.

Interwoven within the project is a wide sample of natural expressions that enhance the organic and park-like qualities to create a green oasis for visitors. The center’s sustainable features include gray water use for plant irrigation, geothermal heating and cooling and recycled materials for landscaping. 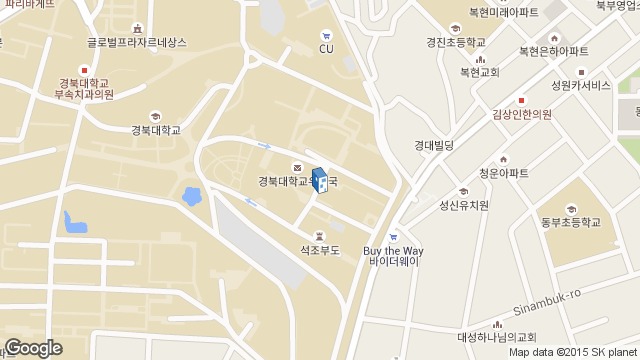