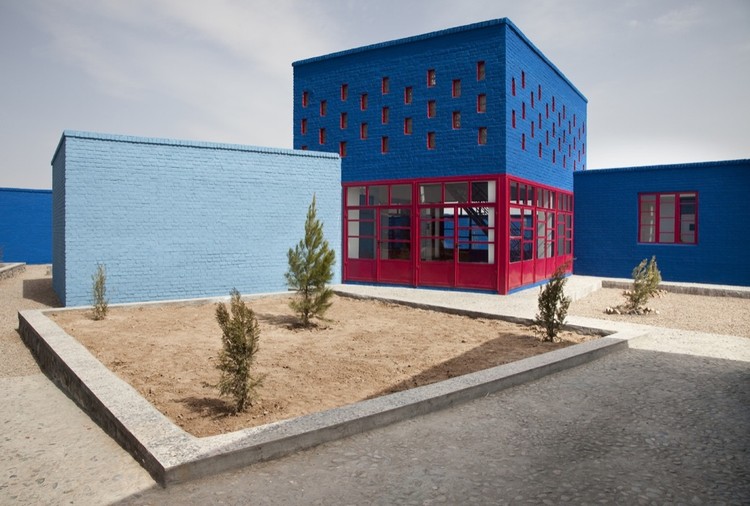 Construction cost is about 150.000 €, including expenses for the realisation of the garden. Maria Grazia Cutuli Foundation has provided for all the funds. The Italian daily newspaper Il Corriere della Sera will donate fifty computers and the Provincial Administration of Catania is going to grant the realisation of the school playground. The colour fabric Colorificio San Marco from Venice, donated the whole amount of paintings.

In 2001 Maria Grazia Cutuli, a prominent Italian journalist correspondent for the Milan-based daily Corriere della Sera, was murdered by a group of gunmen who ambushed her convoy in Afghanistan.

After this tragic event, her family established the Maria Grazia Cutuli Foundation that aims to support programs on the fields of education and social promotion, for children and women, in those countries devastated by war or natural calamities, especially in Afghanistan. The beauty of the landscape, described in Maria Grazia’s articles, gave us initial suggestions for developing the concept.

The research for an innovative educational space as an alternative to those models related to the after-war reconstruction emergencies has been one of the key points of the project as well as the design of the outside space as a ‘green classroom’ and the attempt to use local technologies and construction materials mainly.

The school stands on a dry landscape characterized by the brown colour of the soil. Few constructions come out from this flat and dusty territory, as enclosed islands surrounded by border walls. To the north the skyline is defined by the dark Hindu Kush Mountains.

The first challenge has been the research of a layout able to match functional needs and evocative spaces. After several meetings supported by lots of sketches and study models, the workgroup chose an articulated layout: a series of linked boxes containing both the classrooms and the connection corridors. The only two-floors volume is the library that acts as a symbolic landmark for the village. The border walls, which were required for security reasons, define, together with the boxes, a complex sequence of voids and volumes. Both external and internal spaces contribute in the definition of the educational environment. Among the classrooms there are small and intimate outdoor spaces where kids can stay, play and relax under the shadow of about fifty trees. The main courtyard, embraced by the building represents the most relational space of the school. Inside the school area and protected by the walls, there are also different vegetable gardens as a natural extension of the classrooms.

After the first stone setting, the works started immediately and proceeded very quickly. Afghan workers carefully followed our drawings but using different construction processes from ours. We use to build the structural frame and afterwards the walls enveloping the spaces. While Afghani construct all the elements at once, foundation, pillars, walls and only at the end the concrete beams and roof. In a certain way their construction methods are similar to the ones used in Italy for the reconstruction after the Second World War. Every week we received from the work’s director, the engineer Taheri, reports, pictures and updates on the percentage of realised works. It was not so easy to control all details at such a distance and thus, at the end of November 2010, three members of the workgroup visited the site to define the last finishing.

The structure of the building is a reinforced concrete frame, closed by solid bricks. All the materials and the applied technologies have been defined according to the local uses. All the façades and the border walls will be painted using different tones of blue. This colour is usually used in Afghanistan and the aim of the project is to create a blue landmark visible from the surroundings. The orientation of the classrooms and the design of the façades have been thought to assure the right amount of daylight and natural ventilation. The windows have been designed as iron frames, painted in red to make contrast with the blue of the walls. 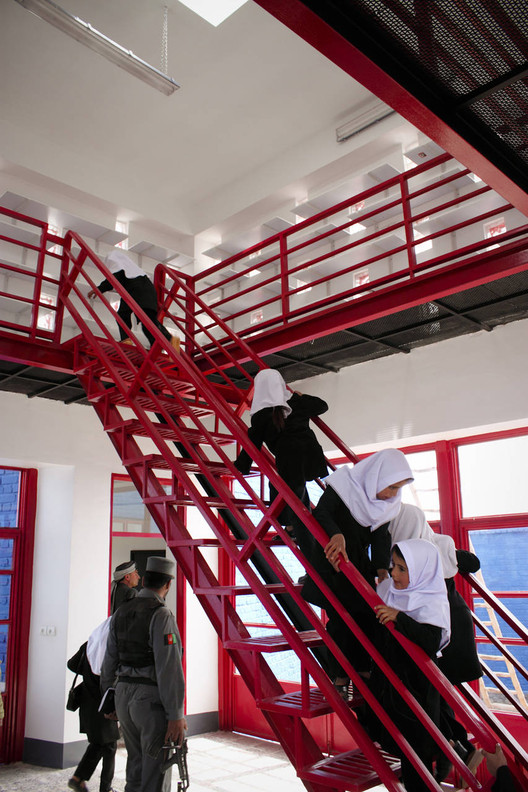 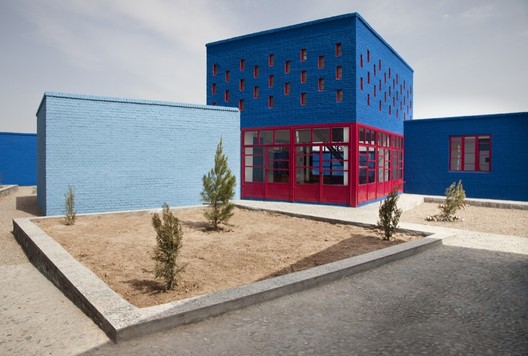