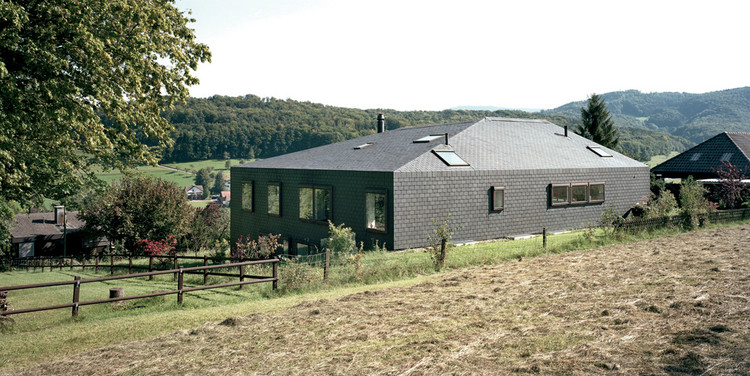 Text description provided by the architects. The village of Lupsingen consists of a small old center and a much larger residential area of single-family homes. The most popular mixture of remoteness and close proximity to the city center of Basel 30 minutes away is justification for this proportion.

The house is set on a hillside on the outer edge of the residential area, backed by the forest to the northeast and overlooking farmland to the southwest. The building's volume interprets the local building codes in an unexpected yet relaxed way. The code allows saddleback roofs and hipped roofs only. In order to benefit from the diverse qualities of the site Luca Selva Architects opted for an undirectional volume and thus chose the hipped roof.

To avoid a static impression, the whole volume has been geometrically manipulated so that the hipped roof is no longer perceived as such. It breaks away on all sides and blurs its dimensions. Combining this with a low elevation compared to the depth, gives the building a horizontal orientation. The overall impression is one of a calm, earth bonded building, yet the inner spaces are light and clear. The house is crossed by an outdoor space leading from the entrance on the lower level to the inner courtyard on the upper floor by an open sky stairwell. These elements light to the rear of the building.

The outdoor space isn't a typical patio. Its peripheral position, piercing the western façade like a loggia turns it into a hybrid space half covered by the roof, bringing an inner tension to the building. The main rooms are set around it: the entrance, a sound studio and an atelier on the ground floor, living room, dining and cooking areas on the upper floor. At the back, the bed- and office rooms form a second layer facing the forest.

On the apartment level, the courtyard turns everything inside out. The three glassed sides allow for cross-views over the interior of the living space and also extend the view out through the windows. The sliding doors also open the living space to an extent that the border between interior and exterior becomes blurred. Yet the spatial structure remains clear, each room extending to the pitched roof area and thus gaining a defined atmosphere. Although this takes place on the inside, the house isn't introverted. Suiting its situation, generous punch windows open up to the landscape.

A deliberate ambivalence can also be found at the structural level: the wooden structure of the first floor is not didactically opposed to the concrete structure of the ground floor. The difference in building materials can only be perceived in the chipboard and expanded copper paneling that form the semitransparent outer skin of the courtyard. These are new building materials that still have to stand the test of time.

The building's appearance itself is also ambivalent. It is a body rather than a house in the traditional way. There is no distinction between roof and walls both are clad in slate. The entire envelope is the roof. There is no canopy and no gutter or rain pipes, the rainwater simply runs down the façade. Following the logic that there is only a roof only skylights have been used. Due to all these details the single-family house looks disturbingly different yet firmly rooted in its surroundings.