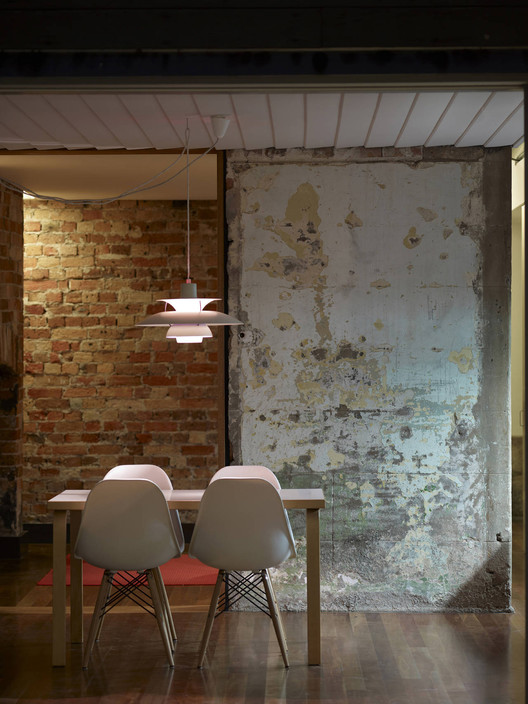 Fitzroy Terrace is a Georgian terrace row, built C1845, attributed to architect James Hume. It consists of seven separate terraces and is a state heritage item. The front of the terrace row remains largely intact. The rear of the terrace row has seen varying degrees of adaptation, extension and reconfiguration.

We were asked to consider one of these terraces. Perhaps the most original of the seven, the property was in a state of serious disrepair. Our brief was to provide a contemporary reconfiguration of the rear of the house, particularly the kitchen, bathroom and everyday living areas and to provide separate visitor accommodation.

The original arrangement of the house consisted of the main front four rooms of the terrace, which were serviced by 2 separate buildings to the rear; a kitchen/scullery with a loft/store above and an outhouse. The kitchen/scullery had been linked to the main terrace sometime around 1890-1900, firstly by a single level laundry, then later by an upper level bridge. In the early-mid 20th Century the breezeway that existed between the two rear buildings was enclosed, leaving the rear lower room of the front part of the terrace isolated from natural light.

Our response was to establish a series of codes to generate the new building forms. These are set out using springing points, levels and profiles of existing forms. A butterfly roof is established to transform the main upper level roof, creating an open light filled bedroom. The new studio roof is established from the existing outhouse roof, its profile extruded across the width of the property to create separate self-contained accommodation for visitors.

The shell of the outhouse accommodates a new bathroom. The breezeway is re-established between the front and rear of the terrace, providing light natural light once more to the rear of the front section. A plywood template, mirroring the profile of the old laundry, is inserted into the breezeway to protect exposed brickwork and conceal services.

Elegant, prosaic materials are used to construct the new forms; all materials used in the new building elements can be found used elsewhere in the existing house. Part of the design approach was to salvage as much of the existing building fabric as possible: bricks from the demolition were reused in new garden walls and paving; timbers, where possible were reused as cladding.

Once again a new code was established in the use of materials. Externally salvaged timber is left unfinished; new timber is painted. Internally, brickwork is sealed and left exposed. Ashlar render is left so the extent of the original buildings is still discernable. Where walls have been removed to provide openings, the cut brickwork is left exposed; where walls already had openings, jambs are simply lined with timber.

Missing sections of original details such as balustrades, windows and thresholds have been replaced with respectful, clearly different adaptations of the originals. The house is an exercise in responsive, small scale details which collectively result in a flexible house respectfully wrapped around the existing heritage fabric. 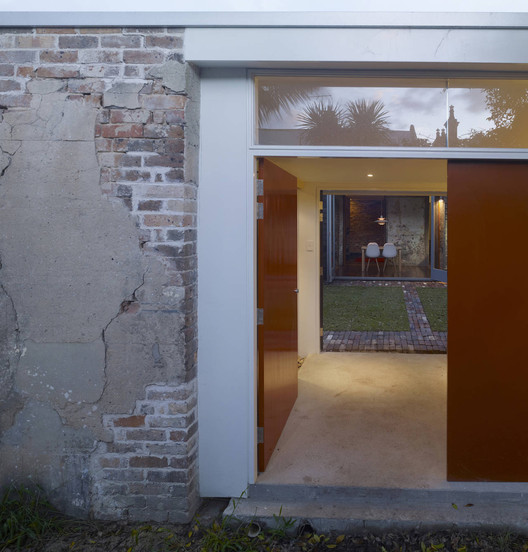