Chicago-based architects Murphy/Jahn have unveiled their design for a 320-meter-tall skyscraper in the Yongsan International Business District of Seoul. Designed as two-towers under one roof, the steel and glass lattice structure is one of fifteen skyscrapers planned for the global city that was master planned by Daniel Libeskind and commissioned by South Korean developer DreamHub. Consisting of mostly high end residential units, the two Pentominium towers will provide residents with exclusive city views and four-storey skyparks, while attempting to recreate the spacious and private feel often associated with detached housing.

Continue reading after the break for the architects’ description. 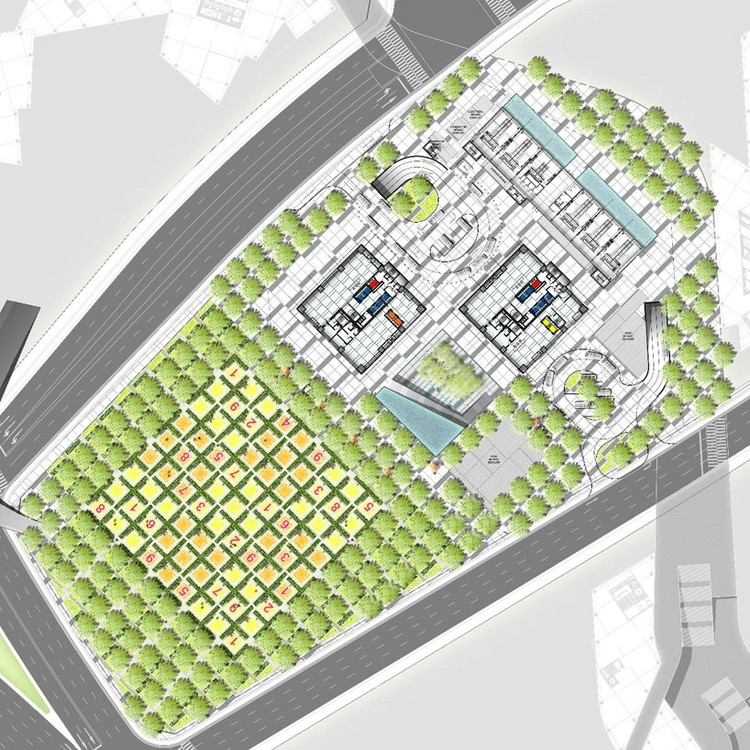 The Yongsan International Business District will set a new standard for an integrated global city. Situated on a high-profile site in the western side of the district, plot R5 houses a signature topend residential building, 320m in height, which will attract the most exclusive clientele from both Korea as well as the rest of the world. These Pentominium units will provide unsurpassed urban living experiences, with spatial and privacy features normally associated with individual houses.

In order to maximize window views and create a sense of exclusivity through minimizing the number of units per floor, two slender towers were chosen for the design. A simple square footprint provides the geometry basis for each tower floor. To take advantage of the desirable vistas to the southwest, the cores for the towers are shifted off center towards the northeast elevations. The resulting U-shaped usable areas can then be divided into one, two, three, or four units per floor, most with view access to the southwest.

Around each unit, the enclosure façade moves in and out from the square tower footprint to create customized bay windows, wintergardens, and enclosed balconies. An exterior screen of vertical and horizontal bars is located outboard of the balconies. The primary module of the screen is 5.0m tall by 3.0m wide to align with the façade geometry. In areas where increased privacy is preferred, such as bedrooms and bathrooms, additional vertical bars are added within the primary module. In addition to becoming the signature design feature of the project, the exterior screen provides four distinct benefits:

The façade layering of exterior bar screen, to balcony/terrace, to enclosure façade creates a three-dimensional space in lieu of the traditional two-dimensional façade. This zone breaks down the barrier between interior and exterior areas, helping to provide the experience of individual house living in a high-rise urban context.

At various heights in each tower, structural bays are carved out of the sides of the building enclosure to create four-story high skyparks. Each skypark will be developed to provide a distinct amenity experience for the Pentominium residents, from a place of meditation, to an exterior lounge, and a sporting/exercise zone. Open joint glass panels in the exterior screen here help to temper these spaces climatically, while still maintaining an exterior experience for the residents.

Amenity functions are located at a mid-height level of the towers. A platform with both interior and exterior areas connects the two towers here, allowing residents to have their own private garden and lounge area in the sky. At the top of the towers are private roof gardens for the ultraexclusive single floor unit super villas.

In case you missed it, check out some of the other skyscrapers planned for the Yongsan International Business District: