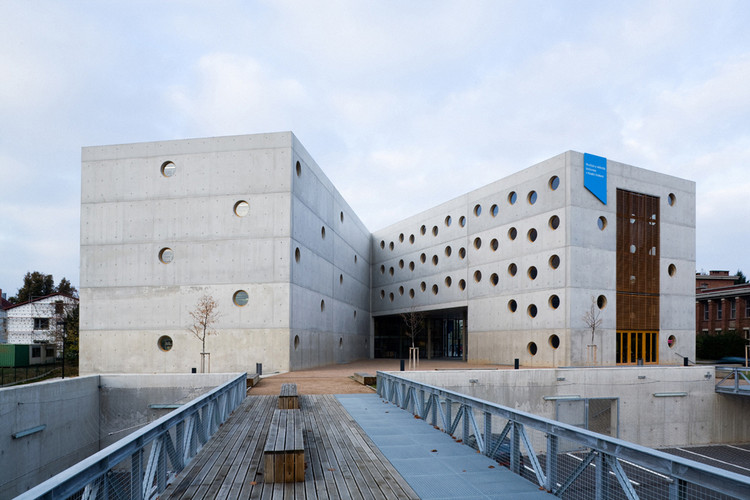 Text description provided by the architects. The Research Library in the Czech Republic was designed by the Prague-based architectural studio Projektil architekti.

Opened in September 2008, the new library is the result of the winning proposal in an open architectural competition in 2002. It is situated on a river bank in the Eastern Bohemian town of Hradec Králové, near the secondary school building designed by famous Czech architect Josef Gočár (1880-1960).

The five-storey building represents a concrete construction with the final visual in the form of a monolithic concrete façade. The original shape of the building is the precast concrete letter "X".

The building is cut through in the parterre. One can walk through the building without entering the institution - library. The building creates an open public urban space, which complies with the ideas of architects (Projektil) about openness of public buildings, as far as architecture is concerned.

From the path, one can enter the library, the café (on the south side), and the exhibition hall (north side, by the river).

Entry library hall is situated in the center of the X-shaped building. There is the main vertical communication (open stairways, and elevator) illumination by a circle roof light. The distribution of visitors, librarians, and books takes place from the central vertical point to the four wings of the X building.

Public space is located in the two eastern wings and occupies three floors. There are bookshelves, study rooms, individual study rooms, and a service counter. In other wings there are offices, storage and on the fifth floor of office wings there is a conference hall.

The interior is also made from concrete. The colored floor plays an important role for the indoor atmosphere. Each floor has a different color. Architects invited artists and graphic designers for collaboration on the interior design. Inside, there are two big wall paintings and a new navigation and information system.

The structure is made from in situ cast concrete - both inside and outside. For heating we use the BKT system (radiant/ concealed heating/cooling inside the concrete construction). Interior finishes are made from exposed concrete, colored floors, colored doors, white or maple acoustic panels, wooden tables and chairs, and the bookshelves are made from galvanized sheet.

The concept of the building is the energy-saving building. 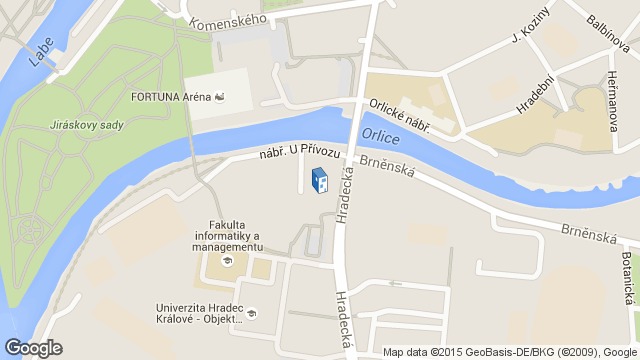 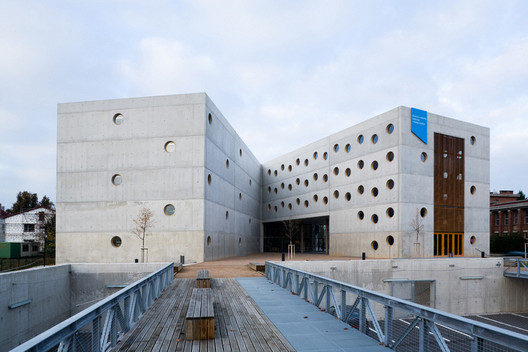