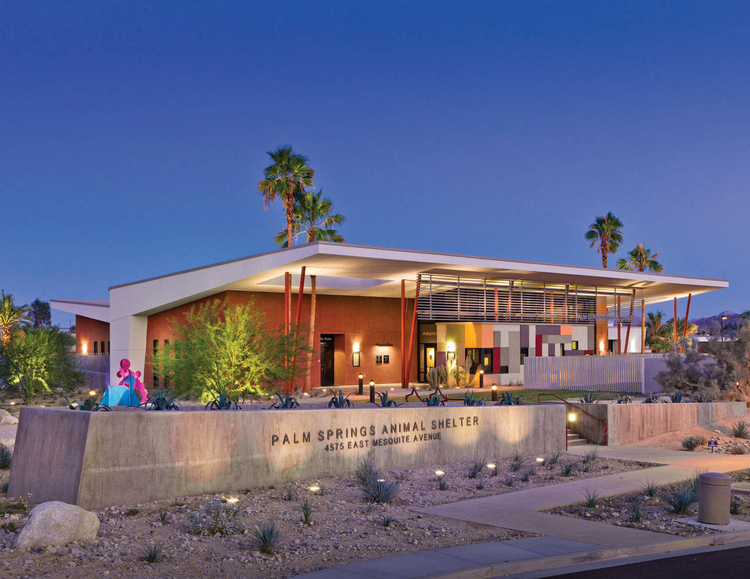 The facility also includes cat community rooms, special canine “living rooms” adjacent to an indoor/outdoor socialization area, secure animal control work areas, a training room for educational and evening uses, and a fully equipped clinic for in-house medical procedures. The project has been designed as an equivalent “silver” LEED facility with a special emphasis on water conservation, where in recycled water from the adjacent sewage treatment plant is used for cleaning all animal areas and for landscape irrigation.

Notable Points
1) Budget, Fundraising and Future Expansion – As the “star power” allure of Palm Springs shifted to Las Vegas in the 1960’s and the focus of new development moved to the other eastern desired cities of Indian Wells, Rancho Mirage and La Quinta, Palm Springs’ economy stagnated and public improvements were largely curtailed. A new Animal Shelter has been needed in Palm Springs for 60 years but funds (and the political will) were not available until the non profit Friends of the Shelter stepped forward to help raise money. The result was a public/private partnership between the City and Friends and a change in the political climate which made the project a community priority to move forward. Notwithstanding the combined public and private fund raising, there was a $2 million shortfall when the project commenced which led to a phased masterplan design including multiple bid alternates.

At the time of public bidding, the “Base” project budget was $6,000,000 with a future expansion kennel area and several rooms “shelled” for future expansion. The bid came in under budget which allowed the shelled areas to be built out in phase I. As the project neared completion and the public began to see the end product, fund raising increased and other internal amenities such as equipment were added. Once the building opened to community acclaim in mid October 2011, several neighboring cities asked to contract with the shelter for animal services. The result is that the future expansion kennel design will now take place in 2012.

2) Green Building Design – The City of Palm Springs has a strong green building program. However, due to the budget constraints noted above, funds were limited to execute many of the desired green and energy efficient features. This led to the following green building strategy;
• Follow LEED guidelines as though this was a certified LEED project but save the fees required to certify and commission the project.
• Incorporate green features that had to be part of the initial construction and design but phase others that could be added at a later date. This approach resulted in the following types of decisions;

1) Invest during Phase I in a water recycling system due to the extensive amount of animal habitat cleaning and the overriding importance of water conservation in the desert.
2) Design a photovoltaic system to handle up to 30% of the buildings energy loads using available roof area and parking structure shading devices but do so in a manner that would allow it to be added at a future date. This resulted in the roof and electrical systems being designed to accept the future system.
Given this overall green building strategy, the project as currently designed without PV’s would qualify as Silver. With the full PV design, the project would be Gold bordering on Platinum.

Concept
This state-of-the-art Companion Animal Facility integrates traditional mid-century desert design motif’s with modern, state-of-the-art Animal Care habitats and support systems. The project plan is a mirror of the desired operational flow of people and animals into and out of the facility organized around a central Canine Adoption Garden shaded by fabric overhangs and cooled by misters. The exterior design features a sweeping roof overhang oriented towards the San Jacinto Mountain range which both announces and shades three main public entrances - the Main Public Adoption Lobby, the Intake Lobby and the Education Center - each of which overlooks the City’s actively used Demuth Park. These entrances serve the following needs;

1) The Main Adoption/Business center; is where adoptions, licensing and related business activities occur.
2) Public Intake is located next to the Adoption Entrance for the admittance of stray and surrendered animals so as to reduce the risk of disease transfer. The reception desks of these two entrances are backed up internally so that minimal staff can service either lobby.
3) The after-hours Education Center/Classroom entrance is a community oriented multi-purpose room. The design places restrooms between the classroom and Adoption Center, which allows the rest of the facility to be secured after hours while community programs and/or humane education classes are in use.

All cleaning water and irrigation is provided by “recycled water” from the adjacent sewage treatment facility. The plumbing system features a trapless drain arrangement designed to eliminate standing water in drains ( and, hence, odor) which is activated by power flush controls. The building also features a piped oxygen gas system in its medical area. Expansion – The plan has been arranged to allow for future expansion of kennels and support areas to the east (see floor plan). The structure and electrical system has been designed to support future photovoltaics. 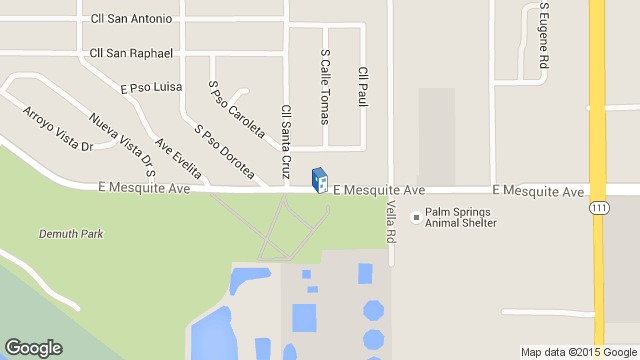