Save
Xieira House II / A2 + Arquitectos 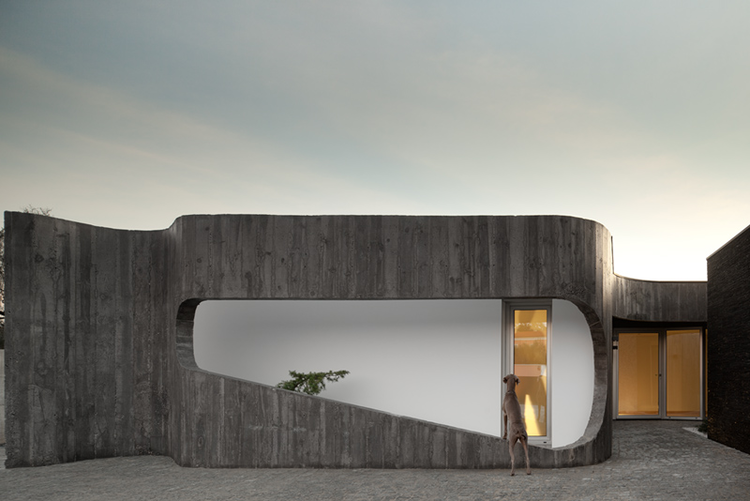 Implemented in a slender lot from north to south, the project born with the aim of building a dwelling with a single floor

The typology was defined according to the best sunlight, as this is one of the richest of this Mediterranean country. So all rooms are oriented to the east, the living room (place more permanent) to south, the kitchen to west and garage to north where the functionality is the symbiosis of the project

The professional link of the owner to the forestry sector, led us to look for sources of inspiration in the region. We are in the west of the country, near the city of Leiria that is distinguished by loggers and mythical forests (created by King D. Dinis in order to protect the city from sand storms from the winds off the Atlantic ocean) this was the turning point of the project which allowed us to take advantage of traditional formwork pine boards used in the concrete in sight walls at core walls of the house.

The simplicity of the project s expressed by twisting volumes, clearly creating a courtyard entry that indicates slightly pedestrian access to the main entrance of the house. These indications are given to the observer by curvilinear shapes of the concrete in sight walls.

As the source of inspiration used, the project resulted from a constant metamorphosis of the modern, minimalist, fragile and traditional, raw, lush. Thus were linked elements such as rough wood formwork of the in sight concrete and the creation of curvilinear and modern shapes, between the black color in the concrete and the traditional white plaster, between facades of black shale and Portuguese sidewalk, between the massive scale volumes and thin sun protect flaps or the long glazed windows.

As a result of this exercise was created a typology of family dwelling, this project distinct itself from the others by their discreetly bold presence without never denying the deep roots of their culture.