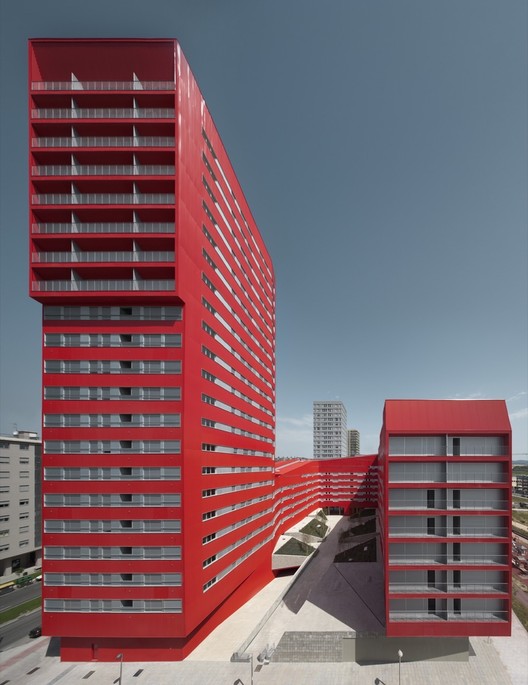 Text description provided by the architects. The plot, in accordance with the criteria established by the town planning, is occupied by a 21 store-high tower and a continuous U-shaped block with a varying height between four and seven floors. All the front gates of the development are on the ground floor, as well as nine retail units. The two basement floors occupy the whole plot and house the garage, the box-rooms and technical rooms and the rest of the surface is used for council housing.

The building is designed from a rationale of energy saving and economy of means, following the criteria established by the developer.

The dwellings are double fronted, the bedrooms being on the façade that looks over the garden patio, whilst the kitchen and living areas face the street. Thus, the public area of the house is linked with its urban equivalent, and the more private one destined for rest, is linked with the inner courtyard as a space of peace and quiet.

Given the view from the rest of the towers of the roof of the lowest block of the building, an important effort was made to treat its appearance with care, considering it, without a doubt, as the building's fifth façade. For that purpose, all buildings services are grouped around the central axis of the building and are ventilated through a continuous ventilation grille, thus avoiding the presence of rooftop typical chimneys.

As regards to the proposed typology, how space is dealt with is worth noting. It is as if we were dealing with an open and free space, its centre occupied by a cluster of rooms with plumbing in them, all served by a single shaft, which is painted black, educationally showing how the building services work and, at the same time, offering a perception of a unique space crossed by light from one façade to another.

Apart from the typical building services of a block of flats, the installation of a cogeneration system complementary to the conventional thermal production of a central heating boiler with individual management is worth mentioning. This system covers part of the hot water and heating needs of the building whilst producing electricity to sell.

The cogeneration unit consumes natural gas to generate 70 KW of electricity and 109 KW of thermal power in the same process, by making the most of the heat generated during the cooling of the motor and exhaust fumes. That implies a considerable reduction of CO2 emissions to the atmosphere and, furthermore, the fact of producing and managing its own energy allows, in turn, for a considerable saving in the electricity bill of the users.

The decisions regarding the image that we put forward for the building were conditioned by the proposed idea to build five towers on Salburua Avenue as a town planning landmark and as an answer to its intention of identifying different areas of the city in its expansion process. In this case, not churches but council subsidized houses rise above the skyline of the city, an expression of the creed of the society of welfare and its commitment with citizenship's right to a decent home, regardless of the economic level of the people who live in them.

The building we are showing occupies the central position of these five towers and it signifies "a milestone within the milestone" which, with its red colour, intends to express optimism, confidence and commitment with the future in a mainly grey social and architectonic frame.

Development of 242 affordable units located in the expansion area to the east of Vitoria-Gasteiz, specifically in Sector 11, plot M3, Salburua.

The houses are built with a view to offering excellent living conditions, being energy efficient, and economizing the common areas, giving priority to double orientations and offering the best views of the environment.

In the interior, development is proposed to maintain the spirit of continuous green area plan (the linear park), so that the courtyard is perceived as an expansion of urban space instead of an enclosure. 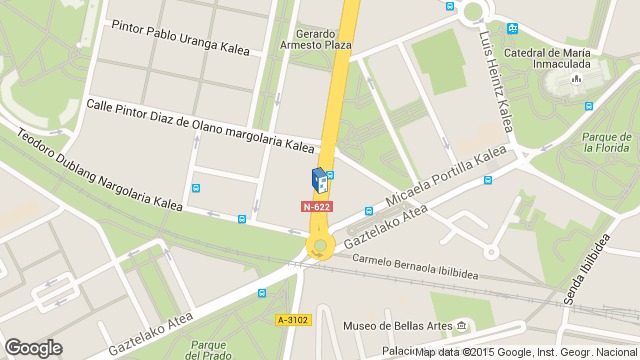