Text description provided by the architects. Talking of the La Salut Market Square is to speak about the neighborhood of La Salut. It is a peripheral quarter of Badalona, a big council attached to Barcelona. It grew strongly in the 60’s and 70’s with immigration from the south of Spain, and recently strong identity problems have emerged due to a high rate of new immigration from all over the world.

It is also to speak about the market building by the architect Josep Maria Sostres, built in 1980. An auto referential building with great plastic and intellectual power, it dominates and has become the frame of reference when describing the square.

Giving identity to the whole area through this "forgotten" space, giving it presence, providing it with the required functions and reflecting the complexity of the environment - these are the goals of the intervention.

Presence. The space was a residual area, without access to the market building. A new access door on this side was later formed, which through time became the main entrance to the market.

The successive transformations of the neighborhood in social standard, public facilities and infrastructures have given it a new presence. The intervention is a process of "emptying" the space. Where before there was a superimposition of fixed elements (walls, street lamps, stairs, benches, shrubs...) now there is geometry, flows of people. It is a dynamic space.

Formal simplicity. The new square responds to a great number of circulation flows. The building, with its main access to the north, generates the entry and exit on market days. The La Salut Civic Centre (on the first floor) is accessed from the existing ramp. There is also the importance of the main cross, the convergence of Marquès de Sant Antoni Avenue and Quevedo Street, which includes underground parking and bus stops. On the pavements, the exits of the new L9 underground station have recently been installed.

We opted to simplify to the maximum the form of the square, reducing it to an inclined plane defined by its triangular limits. It is an isotropic space where itineraries are not prioritised and where free flow is facilitated.

Rich composition. The space responds to different uses that can be accommodated; circulation space, encounter, meet, play... On a bigger scale it is about the new centrality into the neighbourhood. The project also represents the social diversity of the neighborhood, with the high immigrant population, both recent and established. 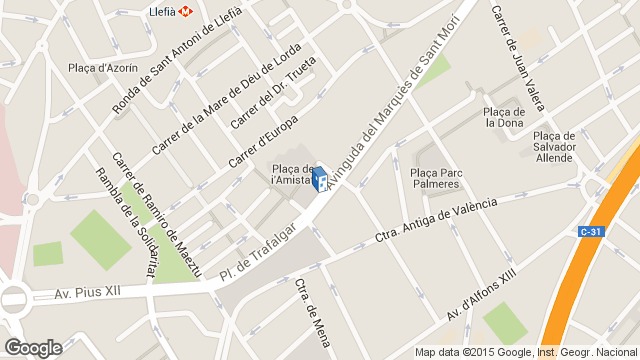