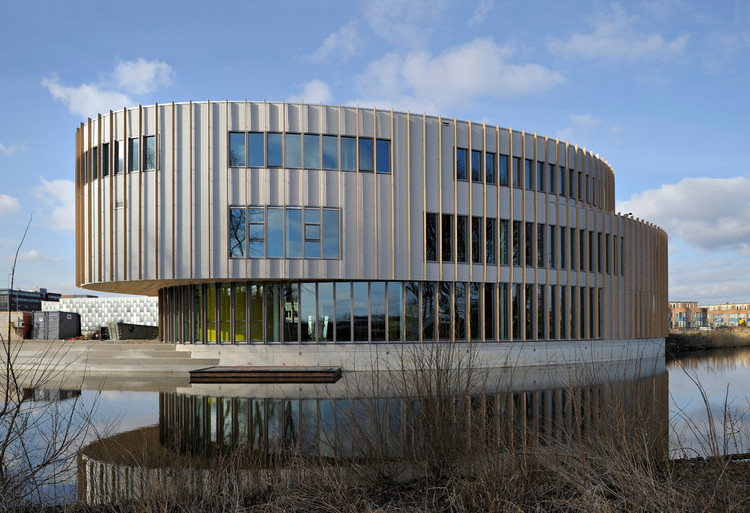 Text description provided by the architects. In 2004, Paul de Ruiter was invited to compete in the selection of the architect who would design a cultural building in the southeast district of the city of Amsterdam. This cultural building was to be a multifunctional building for four users; a circus (Circus Elleboog), a theatre (Krater Theater), the Youth Theatre School and the Theatre Workplace, all professional organisations in the field of talent development, cultural education, production and programming.

On the basis of a presentation of his vision, including his proposal to work with a dynamic programme of requirements, Paul de Ruiter's architectural bureau was selected by the city of Amsterdam, southeast district, to design the cultural building.

How can you ensure that a design process proceeds efficiently, decisively and harmoniously when time is limited, but at the same time you must take into account the divergent requirements and interests of four different users? Paul de Ruiter developed a dynamic programme of requirements - a flexible design process with a plan that was not already drawn up in detail.

To identify the specific wishes of all the users and integrate them into the design and to give the users a good idea of the architectural possibilities, several workshops were held during the design stage. During these workshops, plans were made with the users and the customer, and these were later reviewed at regular intervals. This finally yielded a design that satisfied the requirements of all the parties involved.

The design process started with a study of the programme for the cultural building. Paul de Ruiter's architectural bureau built various scale models that gave an indication of the different options for form and layout. With these models on the table, it was possible to hold brainstorming sessions during the workshops on what the building should look like and what functions it needed to fulfill. In view of the location of the cultural building in a park, a recognizable, pavilion-like building was chosen with a layout that could be adapted to the various requirements of the users.

The site of the cultural building is specified in the urban development plan. The building is located in the heart of the Bijlmer neighbourhood at the edge of the Bijlmer park, beside the lake. It is public and accessible, and its position beside the water gives extra dynamism to this image due to the reflections in the water. To make it possible for performances to be held on the water as well, for example on large floating platforms, steps that can be used for seating have been placed at the water's edge. When no performances are scheduled, the steps function as a meeting place, where cultures, generations and artistic disciplines meet each other.

The cultural building consists of an ellipse shape, with the upper two floors slightly displaced in relation to the ground floor. This provides a covered entrance area located in a logical position in the urban development plan's routing.

The elliptical shape of the building did mean that it was necessary to search for a financially viable way of reproducing this rounded shape in the partially glass façade. The solution was found in a combination of wooden slats and vertical aluminum strips placed against the steel and glass sections of the facade. This means that the intersection points of the segmented façade are not visible and the building has a rounded, dynamic and somewhat abstract appearance that changes continually as you walk around it.

During the day, the striking shape of the cultural building makes it clearly recognizable, while it is conspicuous in the evening because of its color, which can be altered to fit the occasion. This is made possible by the use of LED lighting. A line of light is fitted behind the steal façade in the façade, shining downwards. Because this light shines against the steel façade and the wooden slats, the building acquires an appearance of transparency, as if the light is coming from inside the building. The illumination of the building increases the level of safety and makes the cultural building clearly visible from the urban surroundings.

One requirement that was specifically identified during the workshops was the need for daylight in the main auditorium. Lessons and rehearsals would take place here during the day, and a good level of daylight access is very important for the atmosphere and sense of orientation.

In the theaters that were visited for the workshops, the users often commented on the lack of daylight, which although understandably kept out deliberately for performances, is still very desirable during the day. For this reason, a glass surround was created on the first floor all around the main auditorium. This solution not only allows a maximum capture of light, it also makes it possible for parents and others who may be interested to watch lessons and rehearsals unobtrusively. These windows can be darkened to keep out the light when performances are held.

During the workshops, the most time, relatively speaking, was spent on identifying the users' wishes in relation to the main auditorium. Circus Elleboog, for example, needed a space with a clear height of 7 meters for acrobatic, trapeze and juggling acts, while the preference of the other partners was for a theater-style auditorium. A solution was found by designing a rectangular auditorium with two ear-shaped appendages beside the performing area - a circus/theater auditorium with between 162 and 277 seats. These two rounded areas on the long sides of the main auditorium make it possible to use this in a range of circus configurations and theater configurations, by making use of versatile wings and movable seating areas.

In addition to the main auditorium, the cultural building has a spacious foyer, rehearsal rooms, three studios, storage rooms, dressing rooms, a sewing room, meeting facilities and offices. The building accommodates the four user groups in the dance class of the Amsterdam School of Arts. For all these users the three storeys are arranged. The main auditorium extends to the height of all three storeys and one of the studios is two storeys high.

On the top storey, the bridges for the operation of lighting and set management are integrated into the concrete floor. This is a practical and inexpensive solution that makes the bridges safe and easily accessible.

The design process for the cultural building was full of creativity. This was not just due to the unusual approach, but was also and primarily a result of the way the workshops were organized. Each workshop was held in a different, unconventional theater, selected each time by one of the users. During a guided tour preceding the workshop, the architect, users and customers were able to analyze the advantages and disadvantages of that particular theater, and inspiration was gathered for the brainstorming session. This then took place on stage, and on more than one occasion, a performance was given to test the size, functionality and acoustics of the space. There was no question of meeting agendas and minutes; the idea was to give creativity free rein. At most, a list of points was put together at the end of the workshop to act as a basis for the following session. This was an extremely flexible, practically-oriented approach, which resulted in an attractive and multifunctional design.

As a result of the ample admission of light and the flexible layout, the cultural building offers maximum scope for freedom and creativity. It radiates openness. The building therefore plays an important role in facilitating the development of talent, particularly in children and young people. The regular tenants (Circus Elleboog, the Youth theatre school, the theatre workplace and Krater Theatre) will work together in this building, creating an enormous level of synergy, a melting pot of cultures. A place for debates inspired by the diversity of the southeast district of the city of Amsterdam. To stimulate this interaction even further, the outer wall of the auditorium, most of which runs through the foyer, will be painted with blackboard paint, and chalks will be available everywhere. Visitors, particularly children, will then be free to leave their message, comment or greeting on the wall. The black outer wall of the auditorium also makes the layout of the theatre clear and facilitates the feeling of orientation. It is obvious that this is the dynamic heart of the cultural building.

The Bijlmer Parktheatre is made possible with help from the EU. 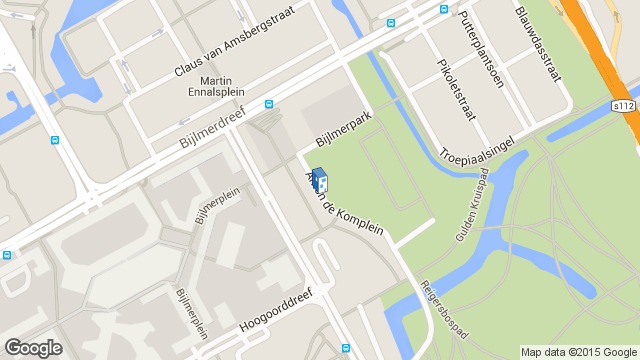 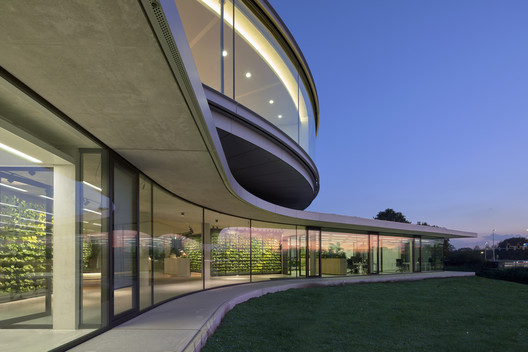 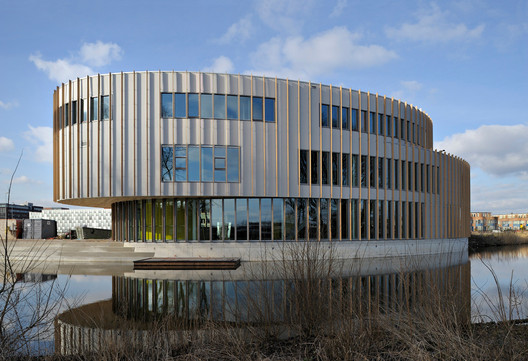