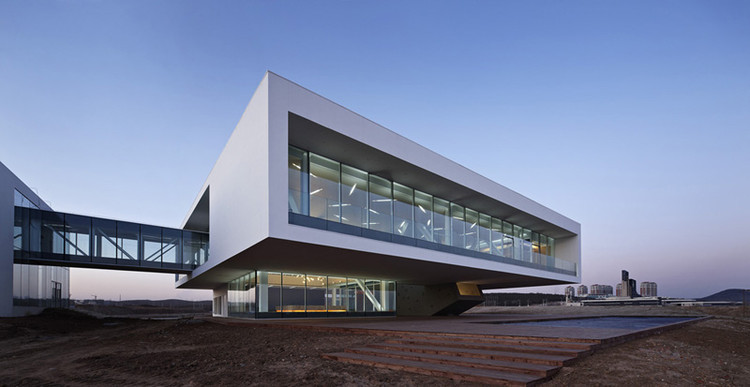 Text description provided by the architects. META-Project, a Beijing based research-practice studio has designed an exhibit center on the beach of Huludao, northeast of China, a project which re-established the relationship between the cultural activities and it’s natural environment. Previous a fishing village protected by the surrounding hills, a river running though the center, the Dragon Bay is the essence of Northeast-Chinese coastal idyll.

Yet still scattered with fishing boats and nets, now it is facing the city’s upcoming development: situated on the west coast of Bohai Sea rim, with only 3 hours of traffic from Beijing, the site offers a natural resource that is so rare across the north of china due to its climate – “the beach”, which attracts tens of millions of people from Beijing and Northeast-China to spend their summer here. As the first building on the beach, META-Project’s Exhibit Center will vitalize the Dragon Bay into a new resort and residential hub for the Liaoning Province of China.

The Exhibit Center is about creating a common base for the bay area, that not only absorb the reserved visitors’, but also attract the public attention and generate more topics. In this currently deserted land, with only a few gigantic infrastructural construction sites, we choose to located the building next to the public beach activity zone – 100 meters from the waterline, so as to set the building as a “Public Stage”, turning each event into a public show. Thus, the center contains exhibition space, gallery, cinema, meeting rooms, café/bar, covered event space and even a beach-sport field in front, offering all sorts of activities for the visitors of the bay. While elevating their expectations, it also activates the cultural life of the entire city.

META-Project’s design is rather a clear deduction process, than a generalized solution. The panoramic sea view is of prime importance for the building, so the concept had to be decongested and cleared, emptied of any symbolic content, so as to stimulate a new reality, which enhances the experience of the sea.

Experiencing the sea horizon from multiple levels becomes the buibing’s own demand, such concept is deducted to a key section: to float the front 2/3 of the building – creating a cantilevered floor for the “stage” to catch more public attention, at the same time offering a covered space for outdoor event; and additionally, a roof-top viewing deck opening to the entire surroundings.

Visitors entering the building, elevated to the cantilevered floor through the inclinded stair-cube, then totally engulfed by the panoramic sea view, this simplified sectional dynamics is actually controlling the entire building, and to let the spatial experience unfold around the differnt level of views.

The main volume of the building is a floating box of 35m x 35m, perpendicular to the seashore, with floor to ceiling glass curtain on the south side maximizing the panoramic view. The cast-in-place concrete stair-cube, which links the three levels of circulation, also functions as the structural support for the cantilever. It bluntly penetrates the floating box with a 25-degree inclination. To augment this conflict, 150 random ecllips holes are perforated through the concrete wall.

In shear contrast, the double-hight exhibition space under the other side of the cantiliver is totally transparent, with full-height glass on 3 sides to maximize the beach view. It does not collide into the floating box, but rather carved out a space from it.

Between the two cubes, where it supposed to be the center of the plan, the massing is unexpectedly empty, allowing light casting into the back of the building, at the same time adding another layer of nature into the complexity of space.

Other program includes ground-floor reception bar portuding out of the north facade, steel meeting-room box floating between the floor and ceiling, linear gallery and sky-bridge linking the model space to the west - Each program forms a clear defined volume that collides with one another in an almost “unresolved” manner. Such “collision”lead to rough but vital tension, through which a space of unexpected complexity emerges.

The building as a whole is a result of the clear deduction and programatic-volumetric combination. Through this speculation, META-Project trys to demonstrate how to catalyze spatial complexity based upon a simplified dynamics, and how to address concerns for the public in a commercial-based project. 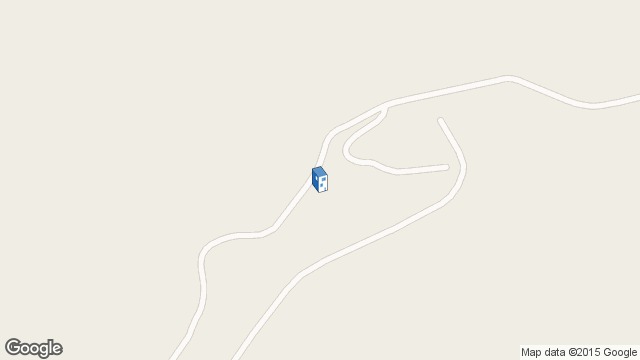