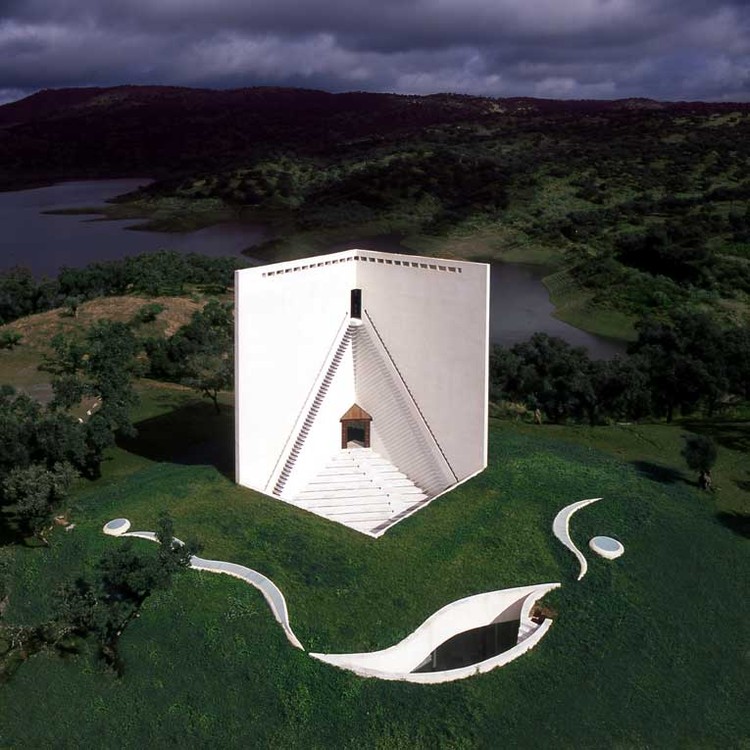 Situated on a promontory overlooking a lake, the house appears like a very strong hieratic, only after the road's last turn. Once a treeless prominence, the house's surrounding site has become populated with olive trees.

Two tall, rough stuccoed white walls meet at a right angle, creating an envelope for the house, and defining its entrance. From this entrance, auditorium like steps of increasingly greater width lead down to an open-air square patio onto which the house opens. The walls outside meeting edge is oriented towards the North, so that its balcony is shaded, and the light entering the house is one moderated by the sunlight reflection on the walls' inner sides. The walls' orientation shelters the house from Northern winds.

The house is centered around the formal square patio, onto which all rooms open, in the Arabic-Andalusian tradition. This formal square patio is an outdoor extension of the living spaces since full walls of glass stack away to allow free movement from the outdoors to the indoors. An ambulatory, so oriented as to be always in shade, defines the patio's two other sides, and serves as the transition between the house and patio.

The interior of the house consists, simply, of a large continuous space, defined on one side by long sinuous walls, with different areas defined by smooth cavities excavated into the floor and echoed by the ceiling above. The perimeter walls are washed by the soft diffuse light descending from the skylights. All practical needs and services (kitchen, baths, storage, etc.) are satisfied by diverse containers placed adjacent to the living room. One rests and sleeps either in the living areas or in the quiescent alcoves enclosed within the sidewalls. The informal curvilinear second patio insures cross-ventilation and allows for a more direct and informal access to the outside.

The balcony–another feature reminiscent of Andalusian architecture and a remarkable example of regional craftsmanship composed of over 3,000 pieces–provides a stirring view of the lake and the surrounding landscape. The ensemble of the house and its balcony, although not by conscious intention, recall the once ever present Andalusian observation towers (atalaya) used to observe the movements of Moorish troops and pirates. To accede to the balcony, two cantilevered metal stairways are provided, so designed that one invites to ascend, the other favors the descent. Water cascades within the handrails excavated, as deep grooves, on the high walls. The water, rushing down, generates at the bottom of the stairs and at the central semi-circular fountain that collects it, a great amount of sound. As the visitor ascends to the balcony, where the water originates, the sound becomes quieter until it seems to become liquid silence.

The house was built in the open, and then earth was collected against its walls to create an all enveloping berm, insulating the house. The building technique, as practiced by local builders, is of concrete and bricks: concrete floor and wall slabs resting on beds of cast sand; a liner of fiberglass, fused at the seams, is wrapped entirely around the buried surfaces. Insulated double walls and slender columns support a concrete roof vaulted in several places to help define living areas.

To keep the house cool in the hot-dry climate of Southern Spain, it is insulated by covering its roof with earth; this keeps it naturally cool in the hot, southern climate. Furthermore, it integrates the roof onto the surrounding greenery. 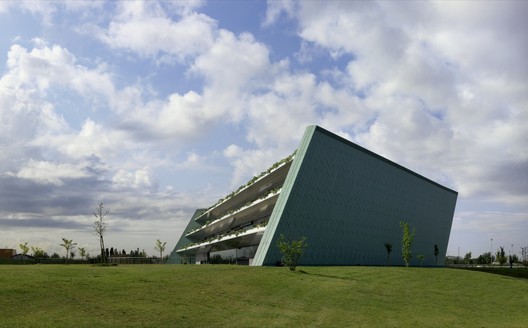 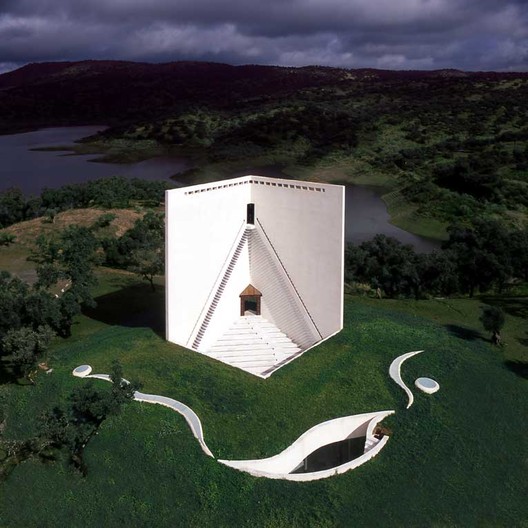