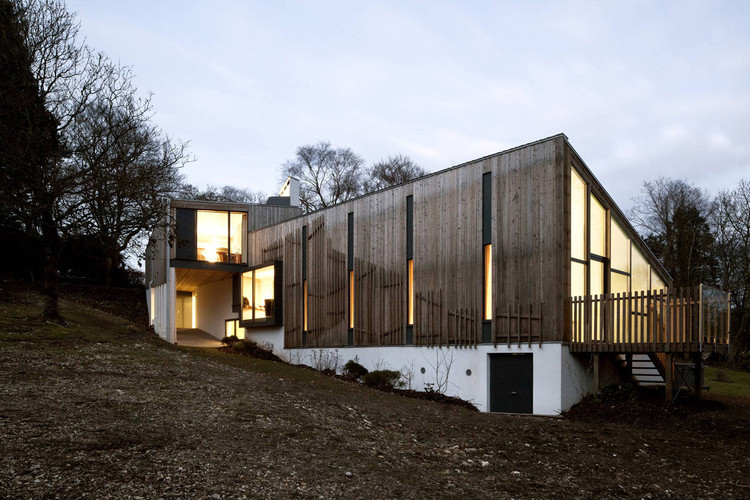 Text description provided by the architects. The building is a pool house addition to an existing dwelling. But in this case the ‘house’ is increase, mixing a double garage, living room, master-bed, gym and kitchen extension in the brief. This structure is situated to the west of the existing building, taking the stance of a traditional outbuilding, acting as a boundary to the paddock, whilst protecting the gardens from prevailing winds. The siting also defines a new approach and entrance court to the property with terrace to the south. At the same time it responds carefully to the house and the folds of the landscape. The roof pitches precisely with the falls of the ground and as a counterpart to the house.

The existing dwelling commands a series of impressive long views, principally across the Holcombe Valley, down a steep incline and allows a glimpse to the sea at Lyme Regis. The extension, set off to the side of the dwelling, seeks to make use of its restricted views and glimpses, either focusing on them, broadly opening to them or concealing them, at controlled positions and scales throughout. The program steps down the slope, minimising visual impact and forming a new entrance courtyard to the northwest. The master suite slopes further westwards giving it a sense of privacy from the main house.

The design uncompromisingly responds to the site, the envelope folding in reference to both the long, pitching roofs of the existing building, and the site’s impressive topography. These folds create splits that focus the eye on the incredible views, and give glimpses of the sea between the mature trees of the garden. An extended living room forms the transition between old and new, around which the diverse programmes of the brief interlock. This large space is articulated by the changing roof scape and the degrees of transparency, which define smaller spaces of varying character.

The living room sits just one metre over the pool, bringing its presence right into the house. Reflected views and light are projected in as the light tracks round from expansive openings to the southeast to a picture window focusing on the low west sun. To reach the pool, the route turns and descends into progressively heavier and more enclosing areas, including vertical, top lit spaces within the core, before being released into the space of the pool room. This also provides a series of buffer zones between the main house and the humidity of the pool. Externally, the existing building is extensively surfaced with clay tiles, the new form compliments this with a timber wrapping that will weather naturally.

The existing house, Heatherlands, was built in the Arts and Crafts style and dates from about 1912. There are strong features from the style such as the large chimneys, fireplaces and dark internal elm finishes but the most distinctive trait is its extensive, sweeping pitched roof. To the west it runs down for eight and a half metres, and its pitch is repeated for the porch, the bays and the gables. The upper storey is clad with hanging tiles, matching the roof, while the lower storey is rendered. Behind this the lower storey is a metal frame while the upper storey and roof is timber frame, an advanced system for the period.

The existing building sits within large mature gardens of approximately one hectare, high above a beautiful open valley, designated as an ‘area of outstanding natural beauty’ leading down to the sea at the Dorset town of Lyme Regis. This privileged position also held inherent difficulties. The site is restricted and steeply sloping, in an area renowned for extremely unstable soils. Mature trees concealing the house and gardens, leaving only select views of the countryside, while a third of the site is agricultural land.

The west face is very simple. Composed of two solid, timber-clad overlapping planes with minimal window openings, except where views are opens at the junction of the two planes, the new building turns its back to the prevailing wind and driving rain. This effectively seals the interior against climatic extremes, yet allows the structure to open out to the house and the spectacular views beyond.

The gym is an area in which the body will experience extreme variations in temperature. As such, the space itself must provide a stable temperature and be able to react quickly. To achieve this it is half sunk, within an exposed concrete base and retaining walls, which will stop the temperature dropping too low and be able to absorb excess heat.

The lower west wall opens to ventilation from the prevailing wind (below the rise of the ground to avoid its full impact). This acts as active support to passive stack ventilation. To the far side of the space, a cut rises up through the building forming a 21⁄2 storey space adjacent to the warm service core, drawing air through. The runs above the guest room and bath ventilating this space too, via manually controlled grilles.

An exposed concrete service core and base provide the thermal mass for the building. The core houses a sauna and wood burning fire, which, although used irregularly will miantain a higher temperature in the core, stabilising the overall temperature of the structure. Above the sauna there is a buffering space that will help promote passive ventilation during the summer months and re-circulate warmed air during the winter. The thermally massive areas are wrapped by a continuous, highly insulated timber frame and stressed skin, to maintain the stable core temperature.

We propose using larch cladding from a Forest Stewardship Council Source. This will weather naturally without the need for finishing seals. Timber is low in embodied energy and we aim to source it locally.

The large window to the end of the pool is south facing for passive solar gain in this high volume space. The glazing will be highly insulated but easily transmit UV.

At the height of summer, the trees in front will come into leaf, protecting it from intense sunlight, avoiding overheating. The two large windows to the west will have solar low-emissivity coatings to avoid excessive heat gain throughout the year. 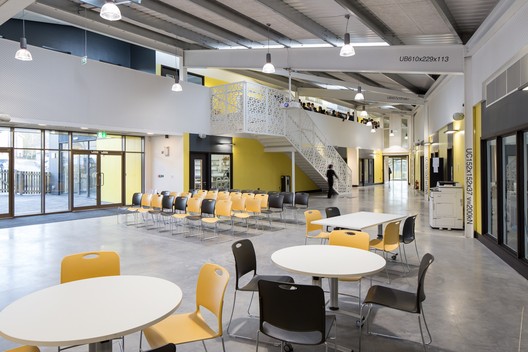 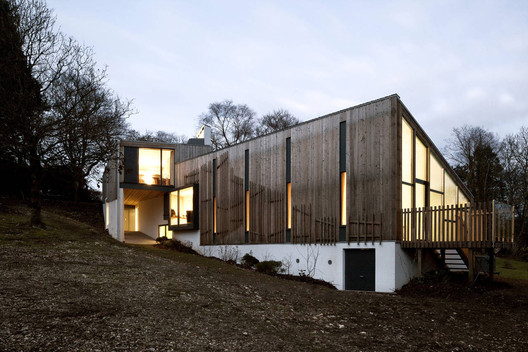