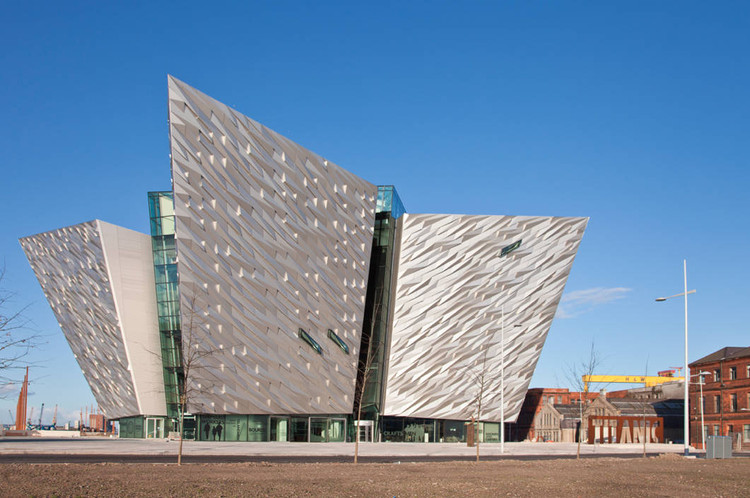 Titanic Belfast will open its doors to the world on 31st March, 2012. The world’s largest ever Titanic-themed visitor attraction and Northern Ireland’s largest tourism project, Titanic Belfast is the result of a successful collaboration between the Concept Design Architects CivicArts/Eric R Kuhne & Associates and the Lead Consultant/Architect Todd Architects.

Located in Belfast, Northern Ireland, on the site where the famous ship was designed and built, Titanic Belfast’s six-floors feature nine interpretive and interactive galleries designed by Event Communications that explore the sights, sounds, smells and stories of Titanic, as well as the city and people that crafted her, the passengers who sailed on her and the scientists who found her. The building will also house temporary exhibits, a 1,000-seat banqueting suite, education and community facilities, catering and retail space and a basement car park.

CivicArts/Eric R Kuhne & Associates and Todd Architects have worked together with Harcourt Construction and a range of other partners to ensure the successful completion of Belfast’s newest landmark. Harcourt Developments engaged CivicArts / Eric R Kuhne & Associates as master planners for the Titanic Quarter site in 2005, with the aim of transforming Queen’s Island into a dynamic new waterfront.

The master plan for Titanic Quarter seeks to create a 21st century centrepiece for Belfast, combining retail, residential, business and cultural elements, all spliced together with public parks, promenades and gardens. Titanic Belfast was conceived as the cultural lynch pin of the scheme, giving a form to the wish for a focal point to unite the site’s various heritage elements. Having first investigated options for recreating Titanic at various scales, it was decided to design an entirely original structure that could also convey the wider narrative of Belfast, its industries and its people.

Todd Architects were commissioned to begin working with CivicArts in August 2008, and together they submitted the detailed scheme for planning consent. The local Northern Irish practice went on to oversee one of the most ambitious and challenging construction programmes in the UK and Ireland. The 14,000 sq m building took three years to complete – the same length of time as Titanic itself – and is designed with the potential capacity to accommodate up to one million visitors annually.

Eric R Kuhne, Founding Partner of CivicArts / Eric R Kuhne & Associates, commented: "CivicArts / Eric R Kuhne & Associates has worked for seven years to conceive, design, and create an international destination in Belfast that celebrates five centuries of its maritime legacy including the building of the RMS Titanic. As Concept Design Architects we have created an architectural icon that captures the spirit of the shipyards, ships, water crystals, ice, and the White Star Line's logo. Its architectural form cuts a skyline silhouette that has been inspired by the very ships that were built on this hallowed ground.”

“Behind this shimmering crystalline façade, four dynamic ships hulls hold nine galleries. Glass balconies overlook the shipyard, drawing office, slipways, and Belfast city centre. The five-storey central atrium is inspired by the majesty of gangways, gantries, cranes that filled the void between the Titanic & Olympic when they lay side-by-side upon the slipways.”

“Titanic Belfast restores RMS Titanic to these shores. Its design anchors the profound spirit of invention & innovation from a century ago in a new form that retells the epic story of the building of these great ships. The scale, location, interiors and stories within the galleries make this the largest and most authentic Titanic visitor attraction in the world. The architecture speaks of the genius of Belfast as one of the world's great historic shipbuilding cities, capturing the essence of over 28,000 workers in the Harland & Wolff’s shipyards.”

Paul Crowe, Managing Director of Todd Architects, commented: “Todd Architects has invested almost four years of work into this truly global project delivering a building which has changed Belfast’s skyline and will help transform international perceptions of the city itself. Developing a building that reflected the ingenuity, ambition and scale of Titanic has been an immense professional challenge – one we are delighted to have met.

“Titanic Belfast has a complicated geometry, providing a challenging build programme which required ground-breaking construction techniques. Its stand-out exterior façade, which replicates four 90 ft high hulls, is clad in 3,000 individual silver anodized aluminium shards, of which two-thirds are unique in design. The resolution of the geometries involved required the use of sophisticated 3D-modelling, completed by Todds in-house, in a process of ‘virtual prototyping’ which we developed specifically for the project.”

“Titanic Belfast also incorporates the best design and technology available. For instance, the building adopted an integrated design approach in line with the Intergovernmental Panel on Climate Change Working Group III Guide Lines and is on course for a BREEAM Excellent status. Plus, like Titanic, the project was completed on budget and to a strenuous time constraint which demanded completion in advance of the forthcoming centenary of the Titanic’s maiden voyage in April 2012.

“This is a landmark development for Northern Ireland which we believe will demonstrate the ability of iconic architecture to shape internal and external perceptions. Belfast has come far in the past 15-years and a statement building such as Titanic Belfast reflects and reinforces the city’s renewed sense of civic pride and cohesion.”

Titanic Belfast is the centrepiece of the £7bn Titanic Quarter development, one of Europe’s largest urban waterfront regeneration schemes which is turning a 185-acre site on the banks of Belfast’s River Lagan into a new mixed use maritime quarter with a mile of water frontage.

Titanic Belfast is an iconic six-floor building featuring nine interpretive and interactive galleries that explore the sights, sounds, smells and stories of Titanic, as well as the City and people which made her. It is the world’s largest Titanic exhibition. The building will also house temporary exhibits, a 1,000-seat banqueting suite, education and community facilities, catering and retail space and a basement car park. Visitors will learn about the construction of RMS Titanic and the wide and rich story of Northern Ireland’s industrial and maritime heritage. 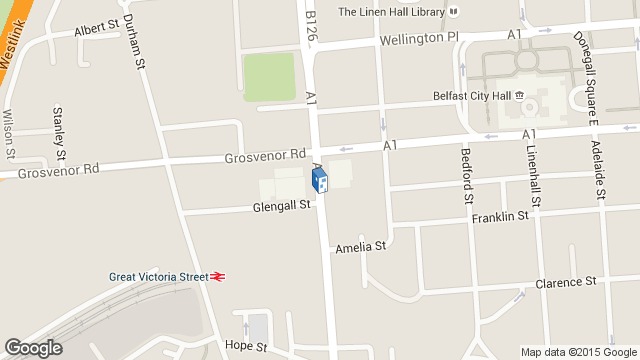 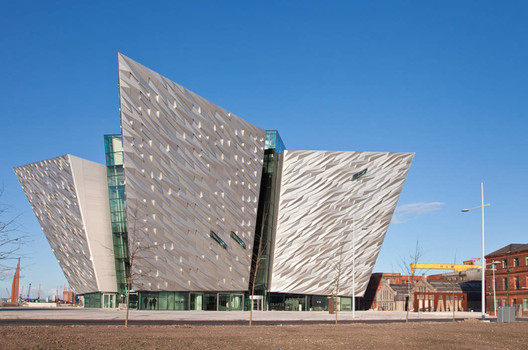