On first visiting the site we were met with a modest bungalow perched on a hill overlooking Vaucluse House. Clients were equally modest, simply needing more space for their family and a better connection to the garden, sunlight and air. Our initial response was to maintain as much of the house as we could, but the new program required the removal of rear rooms for a larger living area, and the tiled roof to provide first floor accommodation. The introduction of new form and textures are responsive to the existing bungalow.

The existing gardens contained two large eucalypts that greet you on your rise up the hill, and a large rock that sat in the hill to the rear of the house, which became our focal and pivotal natural element in the new composition.

With the underlying philosophy of relative modesty, the new form is setback, maintaining existing amenity enjoyed by neighbours. First floor accommodation is concealed in the black roof form, providing a recessive appearance from the street, nestling into the landscape, and being undemanding, unlike close neighbours.

We arrived at the double height central void early in the design, as it allowed access to desired sunlight, air and connection to the landscape, with our ‘rock’ becoming a feature in the lounge room. The shingled roof contains the void and envelops a parent’s suite and gallery library/study. It rests on two legs at opposite corners of the building allowing possibility of a clear opening to the garden and pond at this level. It opens like an eye to the sky and trees folding and undulating along the perimeter of the plan. When describing this form to the client, and the experience one might feel standing in the lounge room looking out, the analogy of a skirt was used and then stuck, hence skirt and rock.

When arriving at the house you walk up through the garden to the door at the lower entrance level. Rising to the main living level of the house you experience the union of old and new, arriving in the central void that contains kitchen and lounge, opening onto outdoor dining, pond and garden areas. A connection to the old formal dining area and front verandah, with period detailing meeting new, again blurs the distinction between the architectural periods.

The planning is centred around the living space, with the teenager quarters discreetly located behind the kitchen, with a central staircase leading to the parents. A living room to the lower level doubles as guest room and teenage retreat, with it’s own external sitting area. All rooms look onto the garden and have plenty of sunlight and natural ventilation.

Landscape design input was intrinsic, similarly, the structural engineer’s, being critical to arriving at the formal result and maintaining an economy of means. Important to the end product was the collaboration with the builder, through construction management and an organic process between client, architect and builder, a happy result was achieved, both in quality and economy. 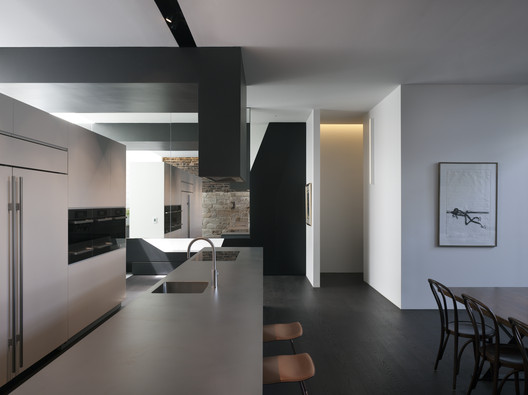