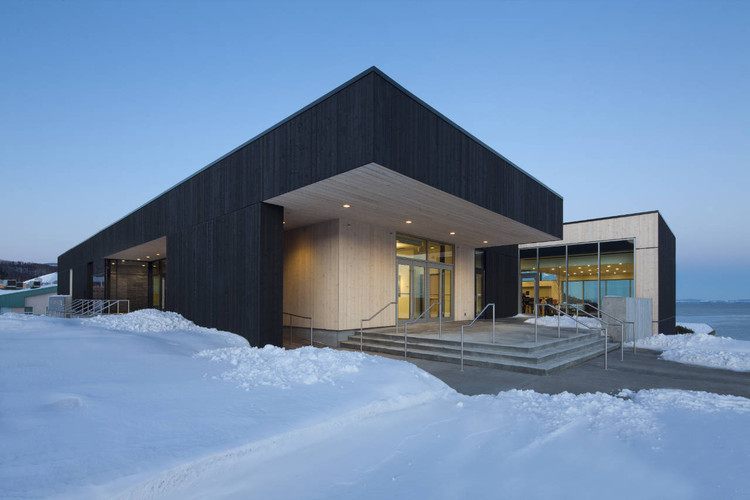 Text description provided by the architects. Located on the edge of the St. Lawrence River, La Malbaie was one of Canada’s first holiday resort towns. The new Laure Conan Library and City Hall in La Malbaie, emphasizes the importance of offering a contemporary architecture with a “story to tell.” The project’s main narrative focuses on the value of the site’s historic landscape as it symbolizes the reconciliation between the present city, and the historical landscape closely linked to the St. Lawrence River.

The city’s name La Malbaie, or “bad bay”, is said to born from the expression used by Samuel de Champlain, and describes the many maritime mishaps related to the bay and its heavy rising and falling tides. The architectural concept of the project is based on the dialogue and contrast between: city/river, wood/stone, and opacity/transparency. The architectural approach integrates several eco-responsible principles: the basic idea of compactness, energy savings, and the use of local resources.

The project also encouraged local workers to become highly involved in the construction of the project. The abundant use of locally produced wood siding was justified given the crisis currently affecting the forestry industry in the province of Quebec. The dialogue created by the contrasting outdoor materials (dark and light wood, stone, glass), and the visual openings and structural features, are several of the strategies used to create a unique multipurpose building that fully integrates itself into La Malbaie’s urban condition, the natural landscape, and historical narrative.

The site’s highly sloping topography that reaches towards the St. Lawrence River is one of the bases of the architectural concept. Responding to this dramatic site condition, two different entrance levels were created to access the building while integrating the library and city hall in a very simple volumetric concept. The stone base positioned on the lower portion of the site hosts the city hall, while a wooden clad box rests on top, housing the Library.

This concept offers a contemporary architectural image against its neighbouring built environment. The use of wood, stone, and conceptual references to the history of the site, fosters a harmonious integration of the building into its context in a contemporary manner. Reading, study, and consultation areas are all located along the façade with an expansive view on the river. Through the fragmentation of the two main masses, certain programmatic functions also receive full views towards the city.

Further, the spaces located between the two dominating elements of the city and river; offer a unique atmosphere to experience. The city council room and all city hall offices have full fenestration with a view on the water. The positioning of the building on the site preserves the original views from Nairne Street towards the river. The library’s wooden volume extends over the principal outdoor staircase forming a viewing device that amplifies and frames the view on to the St. Lawrence.

The fragmentation of the library volume reduces the depth of certain sections of the building, allowing complete transparency through the library from Nairne and Saint-Étienne Streets towards the St. Lawrence. The plan of the library is organized to form an open space without structural columns. It is therefore possible to organize the library in many ways, increasing efficiency and flexibility for the future.

The centrally located service counter offers views on every section of the library requiring supervision. This approach is essential in the context of a small library operating with a minimum number of staff. The multipurpose room is accessible from the entrance hall of the building, or by an independent entrance from the exterior public space. The positioning of the room also provides direct visibility on Saint-Étienne Street.

The cantilevered form of the library also protects an outdoor space that functions as an extension of the multi-purpose room. This gathering space is also equipped with small bleachers, that can be used for story telling, exhibitions, community receptions, and as a rest area for cyclists and pedestrians using the trails along the St. Lawrence River. 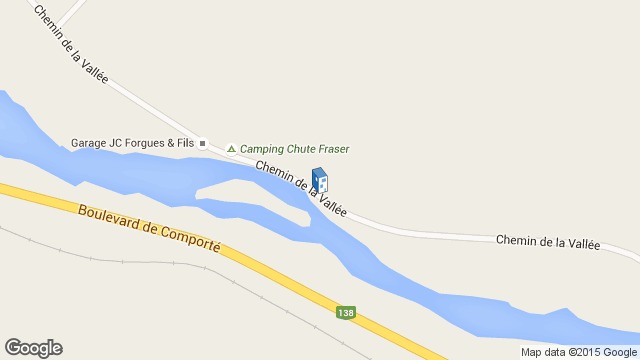 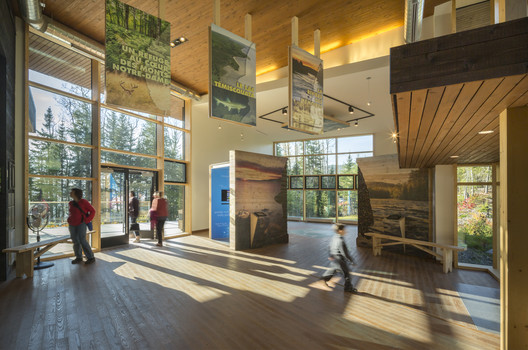 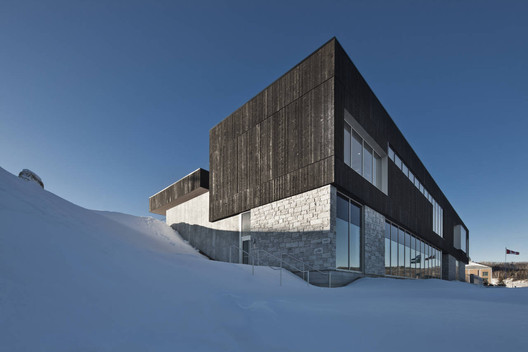 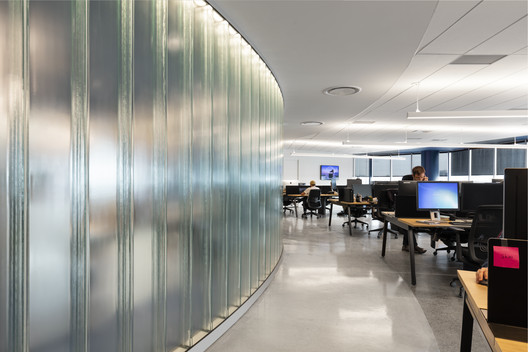