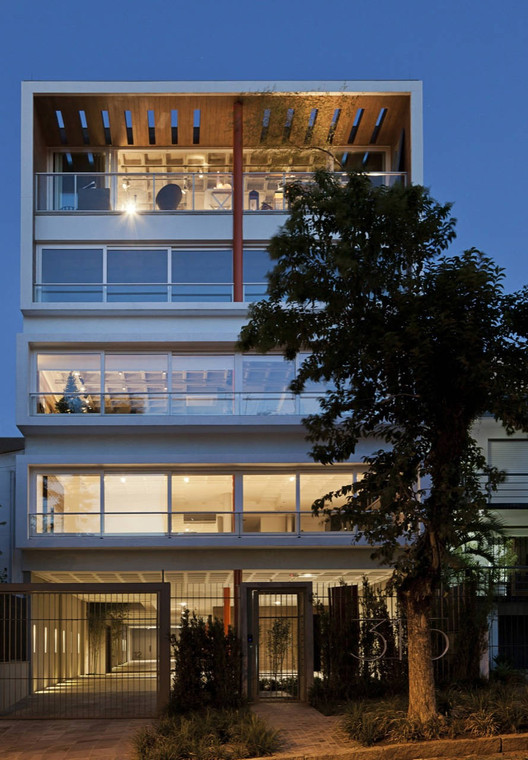 Text description provided by the architects. We live in a moment in time where a crescent pursuit for self-expression, independency and freedom of choice are an important part of a new urban identity in several forms of cultural expression. The Amélia Teles 315 building was created with these premises in mind, almost as a bet that these contemporary perceptions of identity could also be found in and facilitated by architecture. The project had the main goal of exploring the dialogue between private and urban life, specially considering that this dialogue has been forgotten by most real estate developers and architects in Brazil in face of the violence in developed cities.

In the private sphere the relations of identity were reinforced through an open plan apartment coffered concrete slabs that produced no recessed beams, therefore it’s completely customizable and adaptable to the lifestyle of its residents. In the urban sphere, we have a architectonic object that reinforces the respect to the human scale, integrated to its surroundings an the city in the middle of a lively and cosmo polite neighborhood, where some of the city’s main attractions can be reached by a short walk.

Our goal was to create a building at the same time simple and solid, neutral and timeless. An architecture generated by simple and pure lines that dialogued with the neighbors in a positive way, without sumptuosity or ostentation, integrating itself and interacting with the street.

In some way the same conceptual elements that were part of the residential architecture in the late 50’s and 60’s in Porto Alegre were used, but under a contemporary point of view. The building consists in 8 apartments, ranging from 102 to 127 sq meters as well as 12 parking spaces along its 5 stories, reaching a total build area of 1190 sq meters.

Most of the apartments chose the 1 bedroom configuration, either integrated or semi integrated to the living area. One of the most expressive items of the apartment is the main window that spans 9,40 meters wide and opens 2/3 of it’s length, allowing the complete appropriation of the surrounding views.

Throughout the building high performance double-glazed PVC windows were used. All apartments have acoustic insulation underneath the floor and along the sewer piping system. Heating system was provided in the bathrooms and a central automation system controls all the lighting and power outlets.

As a part of the technical premises, we wanted to have besides the aesthetic effects of the materials used a very low need of future maintenance and high durability. The exterior walls were finished with glass tiles and only LED lighting fixtures were used in the common areas. The rooftop slabs were covered with a green roof and all landscaping was designed with native species with very low irrigation and maintenance needs.

The rooftop besides being a technical area that concentrates water storage, security, automation and elevator systems is accessible to the residents. A Brazilian adaptation of the famous New York rooftops. 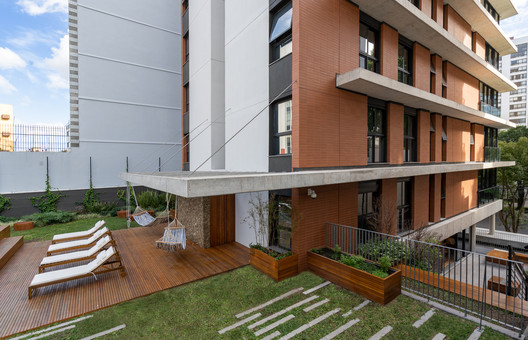