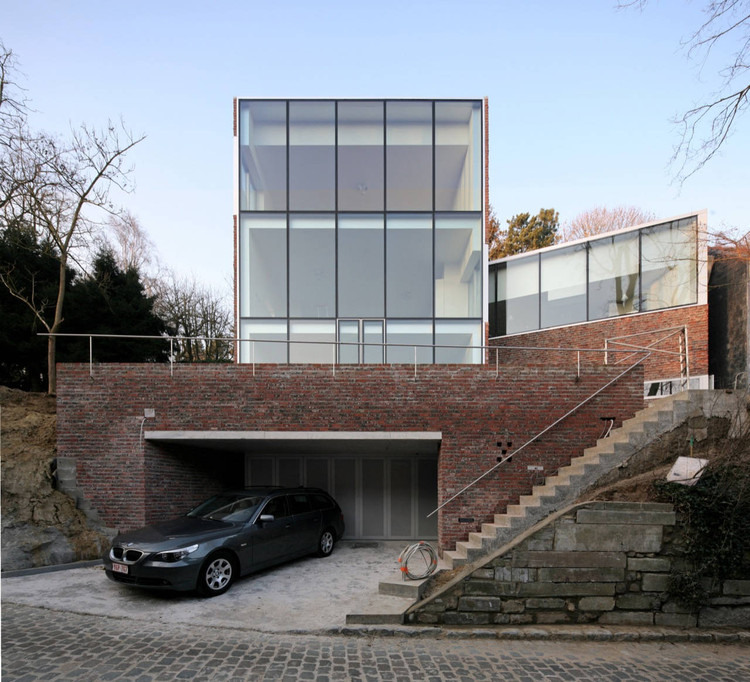 The plot of land is very particular. First, it is very small and its profile resembles more a sloping than a classic plot. Furthermore, the entire plot is dotted with small trees and shrubs of poor quality but allowing for a true mark in the landscape. These under wood characteristics are further reinforced by the proximity of the Verrewinckel wood, which stands at more than thirty metres of most of the plot (see the indicative line on the implantation). The plot is adjacent to other under wood spaces with the exception of the eastern adjoining R1 house covered with a double slope roof and comprising large extensions in the back.

The plot is subject to a “losweg” that does not authorise the passage of vehicles, in accordance with the attached notarial act. In spite of its small size, the plot is particularly interesting insofar as it participates to the quality of the landscape. It comforts the hollow path (including the retaining wall) and contributes to the trees. Conscious of this richness and poetry, we carried this housing project through.

The programme consists in a five-bedrooms single family dwelling comprising two closed garages and endowed with an area dedicated to a film production company.

The first key element of the conception consisted in setting the demarcation lines imposed by the constraints, in this case the “losweg” passage, the alignment with the adjoining house, and the wish to join to this party wall. The first sketches with corbels above the right of way were put aside and preference was given to alignment.

The first sketches attempted to have the project “crawl” along the curve of the road by following the tracing of the right of way. This principle in at least three bays rapidly showed its limitations consisting in a great consumption of the land surface area and an unbalance between built space and green space.

Furthermore, most trees would thus have disappeared. We soon worked with a civil engineering labourer to manage the excavation necessary not only to the volume of living area but also to the localisation of parking areas and zones for the treatment of water, etc.

These parameters progressively led us to put in place a building of two bays placed at approximately one metre from the party wall since the nature of the land did not allow for joining the project onto the neighbouring building (that recently had to undergo a restructuring of the substructure).

This distance is put to good use to place an independent access stairway to the professional area and is covered in such a way that the two buildings are physically connected. The party wall bay is formed by two platforms placed on the level of the higher ground, whereas the second party wall consists of 4 platforms placed at street level to allow the access of vehicles.

The project rapidly evolved towards a distinction of primary and secondary volumes in a way to articulate on the land. In the last version, the second volume pivoted by a few degrees in order to consider the curve of the hollow path. The implementation thus allowed maintaining the maximum amount of sloping and of land to maintain the overall concept of under wood.

Connecting the project to the road evolved from a high area of embankment walls to that of a significantly lower size articulated on the current retaining wall, “placing” the stairs on the natural terrain and thus limiting any visual obstacle in the course of the hollow pathway. The height of the platforms was studied to stand as low as possible.

Additionally, we studied (general scale model of the site, a dimensional and photographic map of the nearby houses) the relation of height with nearby buildings. We should note that the orientation places this building to the north of the opposite neighbours of the Rue Dolez and does not create any disturbing shade. We should also note that the size of the trees indicates some scale relation in this configuration.

Finally, the material chosen is the brick, in the aim of connecting to the built environment. The bricks are placed at ebb joint, the idea being to progressively erasing the stone masonry by anchoring it in the landscape (mosses growing, etc). Window frames are in aluminium and placed just above the facing bricks to establish a tension between the powerful matter plans and the smooth surfaces of the windows in which the surrounding greenery reflects.