Save
AD Round Up: Houses in USA Part I
Share
Or
Copy

Architecture can tell us a lot about the places in which the projects are located. So to start comparing different architecture in different countries, we bring you previously featured houses in USA. Next week, houses in Latin America.

Openhouse / XTEN Architecture The Openhouse is embedded into a narrow and sharply sloping property in the Hollywood Hills, a challenging site that led to the creation of a house that is both integrated into the landscape and open to the city below. Retaining walls are configured to extend the first floor living level into the hillside and to create a garden terrace for the second level. Steel beams set into the retaining walls perpendicular to the hillside are (read more…)

Monte Silo / Gigaplex Architects Our charge was to design a house for a newly single man with two grown daughters from whom he expects multiple grandchildren. Earl, the client, is foremost a sound engineer, but also a screenwriter (of course), director and producer in the film business, with many big Hollywood pictures to his credit, and hence he has to be on the road for lengthy periods of time. He requested a home both cozy in scale (read more…)

Hill House / Johnston Marklee & Associates Completed in October 2004, the Hill House was designed under challenging conditions generated by modern problems of building on a hillside. Located in Pacific Palisades, California, while the site for the house offers panoramic views from Rustic and Sullivan Canyons to Santa Monica Bay, the irregularly shaped lot is situated on an uneven, downhill slope. With the canonical Eames House nearby, the 3300 square foot (read more…) 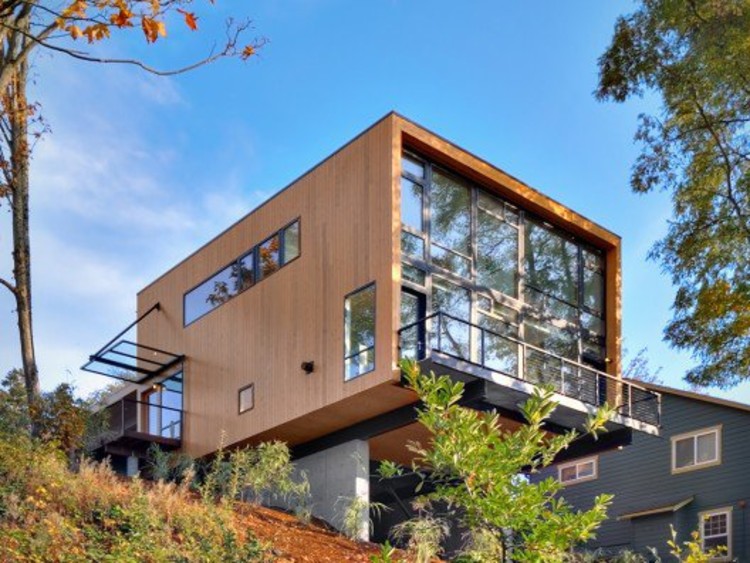 Mount Baker Residense / Pb Elemental Architecture Located in the Mount Baker neighborhood of Seattle, this dramatic home is perched on a hill, high above the street. The design captures the territorial views of the surrounding rooftops with floor to ceiling glass and roof top deck. The 3,600 sqft home includes four bedrooms, two and a half baths, and a large open living floor with ten foot-tall ceilings and a two car garage with a 400 sqft roof deck above (read more…)