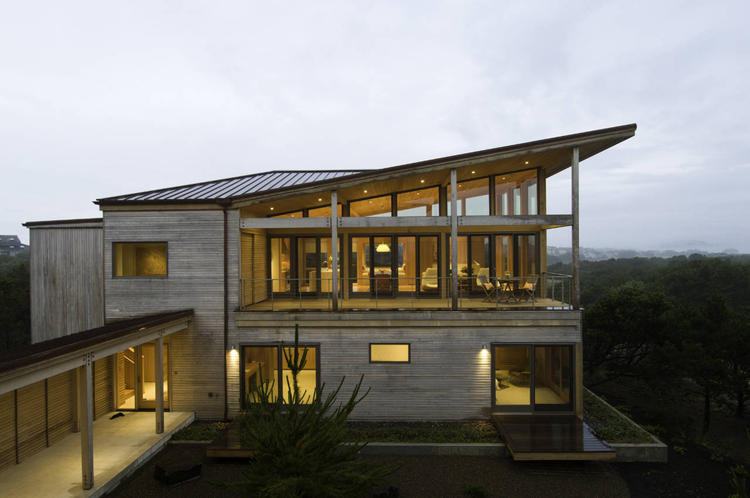 Text description provided by the architects. This coastal residence is an exploration in erasing boundaries between indoors and out. Sited on the bay side of a peninsula on the Oregon Coast, the 2,865 square-foot home opens to the natural landscape with 180-degree views. The design employs a duality of openness and expansive views with spaces that are private and quiet. The residence is organized in three parts, joined in U-shape formation around a central courtyard fronting the view.

The upper floor in the largest of the two buildings is extensively glass-walled. Windows crescendo from 8 to 15-feet tall at the most outward facing point. A large covered deck extends the indoor footprint by nearly an additional 1/3, joining the massing of the residence, framing an outdoor invisible wall. The lower level is more private, with two bedrooms, two bathrooms and a flex room--a space that converts open living area into a guest bedroom by pulling two eight-foot sliding hemlock accordion pocket panels to form walls.

Native Shore Pines with a dwarfed growth habit shelter the lower level with privacy. On the upper level, the experience is one of suspension as one’s feet are just slightly above the treeline. The second building combines a 295 square-foot office and bathroom with a garage below. A hybrid copper rooftop, formed by cross-pollinating the typology of a shed and dormer roof, forms an origami-joined ceiling in the office area.

A 45-foot long covered walkway sided in horizontal slats forms the base of the U-shape. The landscaped courtyard fuses building with walkway, creating focus on where interior and exterior spaces merge. At night, the residence appears as a lantern, and the central courtyard is its hearth. 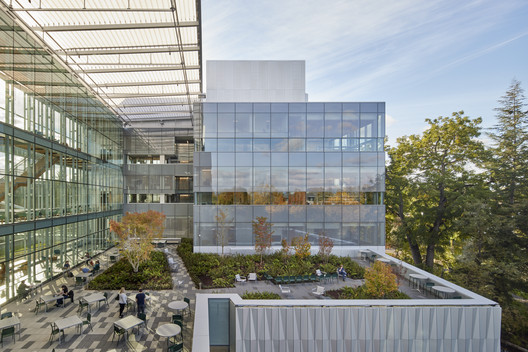