In 1995, Portuguese architect Álvaro Siza packed a few changes of clothes, some poetry books and a single sketchbook as he set forth to Peru. These few items were all he needed to record and interpret his voyage, allowing him to integrate his investigations into his architecture. More than a half a century earlier, Peruvian photographer Martín Chambi ventured into the peaks of Macchu Picchu were he captured a famous series of portraits of the ancient Inca ruins. His project was more political, it acted as a re-appropriation of the site by its locals, but the tools of Chambi and Siza are the same: the production of images to define a reality. 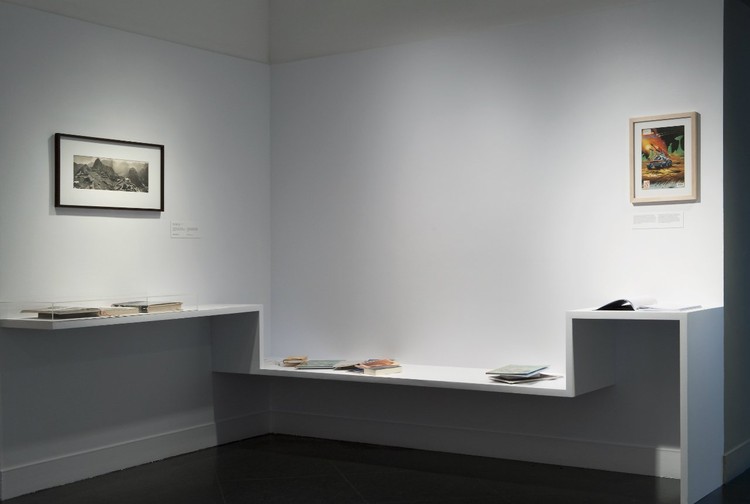 “The images shown in the exhibition are, on one hand, accurate site documentations. However, they are nonetheless filtered through the aesthetic and political inclinations of their creators. Ultimately, both Siza and Chambi present Macchu Picchu as a landscape of their invention.”

A selection of poetry books, suggested by Álvaro Siza himself, are featured at the exhibit. Included is Pablo Neruda’s Alturas de Macchu Picchu, the second part of his Canto General of 1945, from which the exhibition borrows its name.

As a further investigation into the Pritzker Prize architect’s use of sketching both to record reality and as a design tool, the exhibition presents a third component that documents Álvaro Siza’s Quinta da Malagueira social housing complex on the outskirts of Évora, Portugal. The project, started in 1977, was the first for which Siza used the simple black notebooks that he continues to sketch in to this day. The housing at Quinta da Malagueira displays typological features and an interest in the vernacular reminiscent of what Siza later draws at Macchu Picchu. Selected photographs by Gabriele Basilico, Giovanni Chiaramonte, Roberto Collová and Jean-Louis Schoellkopf, depict the complex through the lens of contemporary observers—a final representational layer.

Martín Chambi (Coaza, Peru 1891 – Cuzco, Peru 1973) was born into a Quechuaspeaking peasant family and learned photography in his youth. In 1908, he apprenticed in the studio of Max T. Vargas in Arequipa and in 1923 established his own studio in Cuzco, becoming a favoured commercial photographer for the local élite. Chambi’s documentation of pre-Hispanic Andean cultures were a key component of Cuzco’s Indigenista movement, which sought to recover an autonomous aesthetic and expressive language for the regional population.

Álvaro Siza (Matosinhos, Portugal 1933 – ) emerged in the late 1950s as a leading protagonist of the Escola do Porto, a group of architects attempting to reconcile the experimentations of modern architecture with the conditions of production in Portugal, at that time under dictatorial rule. After the return to democracy in 1974, Siza created a significant series of social housing interventions and smaller private commissions. The scope of his work soon became international, with later designs realized in Germany, Spain, Holland, Italy, Japan, Brazil and South Korea, as well as global recognition culminating in his winning of the Pritzker Architecture Prize in 1992.

Curator: Fabrizio Gallanti is Associate Director, Programs at the CCA. Gallanti trained as an architect at the University of Genoa, Italy and received his doctoral degree in architectural design from the Politecnico di Torino. He has worked in professional partnership with Francisca Insulza and was a founding member of Gruppo A12, a Genoa- and Milan-based collective dedicated to architectural design and art. Gallanti has practiced architecture in Santiago, Chile, and taught architectural design at the Pontificia Universidad Católica in Santiago and the Politecnico di Milano in Piacenza, Italy. Architecture consultant to the editor in chief of Abitare magazine between 2007-2011, Gallanti was also editor of the Abitare website. His writings have appeared in magazines including 32, A+U, Abitare, Domus and Il giornale dell’architettura. Gallanti curated the Triennale di Milano lecture series “Multiplicity, a Collection of Sites,” 1999-2000, the Festival Urbania in Bologna,2009, and the international seminar ”ArchiLiFe, Le LiFE” in Saint Nazaire, 2010.

Reference: The Canadian Center for Architecture