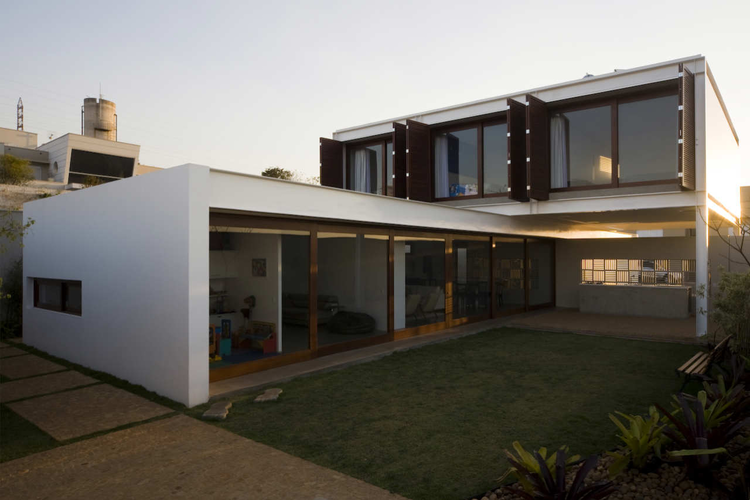 Text description provided by the architects. The site is situated outside the consolidated area of the city integrated into a new front of expansion of urban stain to the Northeast. The natural shape of the land was changed by the earthworks of the settlement. What was a hillside that progressed toward the river-bed opens up to the fields for each of the opposite bank has become a plateau. It was the pretext to organize the construction of the house into a single quota by moving the lowest volume of land.

In the immediate surroundings are the historic buildings of the neighborhood Monte Alegre. It is an architectural leftover set of the end of the century XIX/beginning of century XX composed by: an ancient factory of cane; the Saint Peter`s church (that shelters a work of Alfredo Volpi); the “Monte Alegre” School and the “Vila Heloisa”.

The lot has 16.50 m front by 31.00 m Fund. The house is presented in two overlapping volumes: the first, a linear pavilion houses the kitchen, service dependencies, a sequence of rooms and office; the second, parallel to the street concentrates the intimate areas. The arrangement of volumes draws the limits of a garden. Dormitories and living environments are organized around a central empty space and permeates the house and meets transition function between the residence and its neighbors. The choice of a metal structure emerged as a strategy to ensure accuracy and speed in execution. The total building area of residence is approx. 325 square meters.