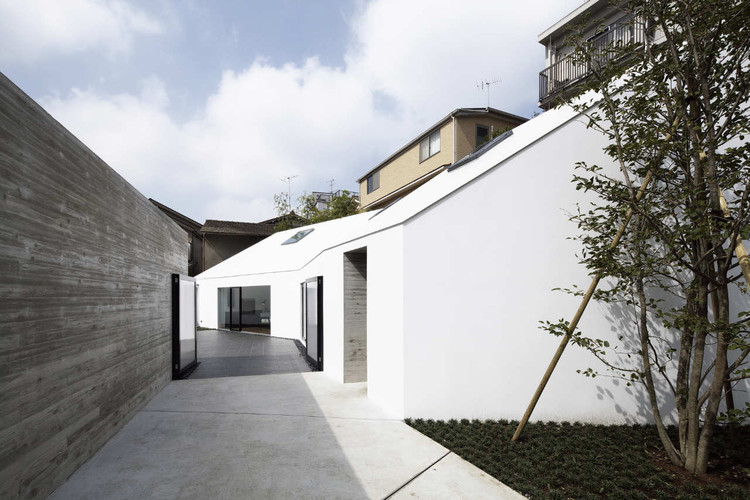 Text description provided by the architects. Lik house is located in the place which went into the residential section from the business district. It was rebuilding in the land in which it was born and the client grew up. It was expected of the residence with a feeling of a resort which can be relaxed, securing privacy, since medium-rise collective housing is also scattered around besides the single-family house of a low layer.

Although it was a site comparatively calm as a residential section in the city of Tokyo, having considered balance with a surrounding residence, it was thought that not much big volume was not suitable. Three small common stores have been mostly arranged along a site boundary, and the residual part made by it became the exterior space whose character is different.

Each volume made wall thickness the shape of a tube of the monocoque by the comparatively thin concrete of 150-mm thickness so that the presence of a building might not become superfluous too much, and so that the boundary between an inside and the exterior might continue vaguely. While slender one-room space is sometimes bent, the president of a university amounts to about 50m continuously. It is dotted in space like this tunnel as a unit with a small function called a kitchen wine cellar toilet closet.

Tasting a peculiar feeling of a trip by diffusion of a soft light, or change of a field of view, if it is wandering about the inside and outside of the building freely by the purpose and feeling at that time -- it becomes.