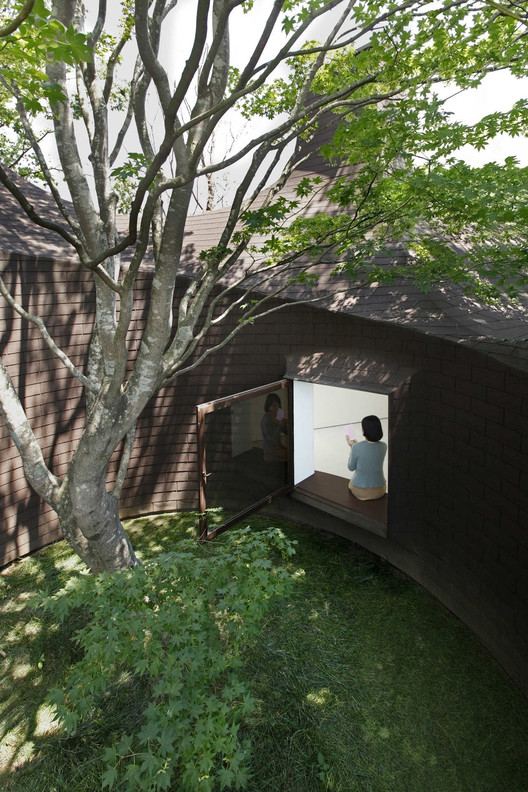 There is a small private art museum in the city of Oyama in Tochigi prefecture. The owner wanted to build a room to showcase paintings that were collected by his late father, Roku Tsukada, and a cafe where people can drop in anytime that has the ambiance of a salon. There is a lack of greenery in the area, and the site is on a road with a lot of traffic. Therefore, we decided to plant a grove of trees to create a tranquil environment in the city that was suitable for the appreciation of paintings. We planted three rows of six trees each in a pattern that is close to being grid shaped so as to allow sunlight to equally reach each tree, and ensure the area above the site will be fully covered in the future.

In much the same manner as trees in the garden combined with the architecture of traditional private homes in Japan in the past to create a pleasant environment inside the home, evergreen trees were planted on the north side of the site to block the cold north wind in the winter, and deciduous trees were planted on the south side to block out the sunshine in the summer and let the sun shine through in the winter. Different types of trees were used depending upon the location on the site, and the building was designed to match the layout of the trees and intermingle with them. The gallery room is inserted between two rows of trees at the rear portion of the site, and rather than partition the cafe with a door, it is offset and has a higher floor to provide a subtle distinction between the two.

Three dimensional measurements of the lower branches on the trees that were to be planted were made and computer processed to allow the shape of the building to be fine tuned so that it would not interfere with the tree branches, trunks or roots, and enable swaying of the branches in strong winds to be taken into consideration. Buildings can be considered the overlapping of layers between the inside and the outside, but for this building, the trees consist of a thick membrane that represent another layer on top of the inner wall, insulation, water-proofing material and outer wall. The trees control the sunshine and wind according to the season, control moisture and cooling with the transpiration effect and absorb carbon dioxide and polluting gases. In addition, this layer emits oxygen and fragrances called phytoncides, and softly envelop the building and the people inside.

A desire to directly reflect the shapes of the trees inside resulted in soft curves in the ceiling and walls. Visitors feel the presence of the trees while inside the museum, and it is an entirely different space from a white cube that eliminates all elements other than the paintings. In particular, the ceiling in the entrance is low with an average height of 1.7 meters due to the fact that branches and leaves are close to the roof in this area. This makes it necessary for people to bend over and discard their social status and pretense and return to their real self. This provides them with a unique opportunity to appreciate the paintings in a different manner. The ceiling in a portion of the coffee shop is so low that you cannot stand. A bench zone was created in this area where visitors are surrounded by the walls and ceiling, and it provides an experience that is similar to sitting down against a tree and taking a rest. In addition, there are window sills that can also be used as a bench or desk, or as a space to put books. This building uses the techniques that we have continuously since the “House SH” to foster a close relationship between people and buildings. Our hope is to create a special type of communication between nature, people and the building by tailoring the shape of the building to the trees surrounding the structure, and using a design that makes people feel at ease and want to snuggle up against the building.

"Building Form Snuggles Up Against Trees"

Wood columns and beams were used since they can be easily worked to match the complicated shapes of the walls and ceiling, and structural plywood was applied to create a monocoque structure. FG board (strengthened with inorganic fibers) was used on the inside to follow the many curves, and it was finished with an elastic coating material. Specially ordered asphalt shingles that likewise follow the curves and still have a good appearance when there are leaves on them were applied to the outside. The trees were planted according to the plan formulated when the building was designed after all other work was completed. The sun that filters through the trees creates a phenomenal façade that changes from one moment to the next. 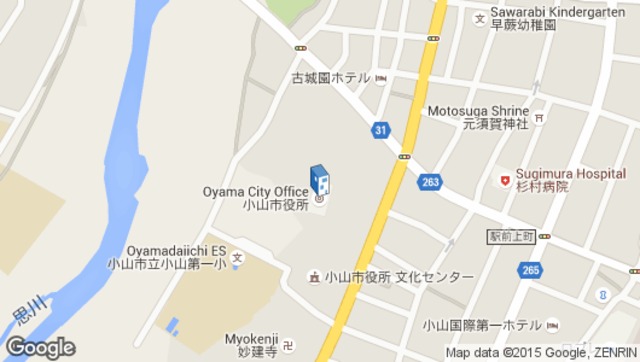