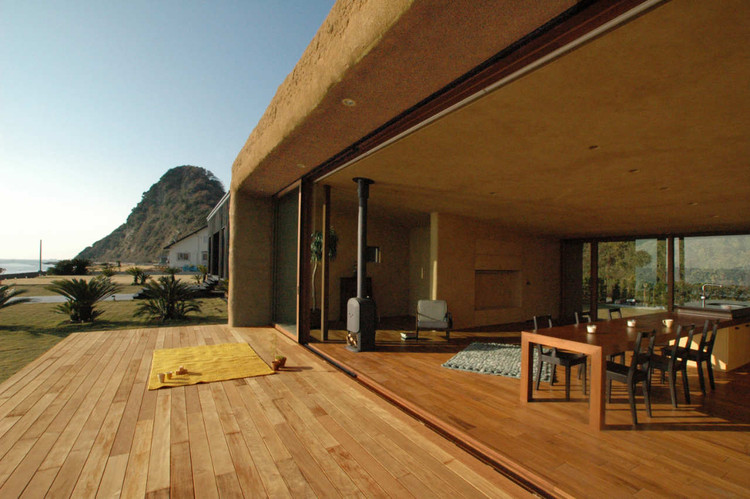 Text description provided by the architects. The focus in designing this house was to make it an extension of gardening. The soil at the site consists of a uniformly soft material that covers the surrounding area. People living in this region have been making this soil into mounds, kneading it and firing it into pottery for many centuries. Looking at the soil and touching it with your hands brings about certain emotions. I wanted to give people the opportunity to have this precious experience while living in the home.

The site is located between the ocean and mountains, and has a view of yachts and other boats on the horizon, the seashore, cliffs with beautiful layers of earth and fields full of wildflowers. The owner of the property lives in a high-rise condominium in Tokyo, and wanted to be close with nature on the weekends, spending time gardening. The requests of the family of three consisted of a large one-room home where the rich natural environment could be enjoyed, a reinforced concrete structure capable of withstanding earthquakes, and a wood deck terrace on the side facing the ocean.

First, reinforced concrete was used for the structure as requested by the owner, with a gate shaped design allowing gentle breezes to pass through, while providing privacy from the adjoining houses and views of both the mountains and the sea. Exterior insulation was attached to the roof, and soil from the site was placed on top of the roof to protect it, with native grass seeds planted to prevent erosion. This eliminated the necessity of using a roofing material, enabling building costs to be reduced and minimizing impact on the environment. The concrete walls needed to be coated in order to prevent corrosion inherent in a site on the seacoast. The same soil that was used to cover the roof was mixed with diatomaceous earth (also known as diatomite), cement and resin, and applied to the walls with a maximum thickness of 55mm.

The family that lives in the house helped, scraping on the soil with wood trowels, metal combs, metal brooms and paddles. Since gravel, seashells and other things were mixed in with the soil, something appeared every time soil was dug up, giving people enjoyment similar to that experienced on an archaeological dig. As a result of this process that included different time frames when the plasterers and owners of the house performed work and different scrape marks they left, various objects in the soil can be seen on the surface, giving it the appearance of having varying layers of soil exposed from the earth.

Therefore, the decisive factors in determining the form, texture and color of this structure were all natural elements, consisting of the hands of the owners and craftsmen, the climate and the earth at the site. For example, the frame and texture were determined by the force applied with the tools used by the owners and craftsmen and the hardness of the soil. The color of the walls was a result of how the local soil and various other materials were mixed together. The profile and color of the roof were determined by the plants nurtured by the soil. After the house was completed, it continues change with the seasons when the greenery is pruned by the owners, the seeds carried by the wind and birds sprout and grow, and the structure weathers. It is this transition that marks the history of this one of a kind home.

The owners come on the weekends, tend to their flowers and vegetables in the garden, gaze at the walls and roof, and interact with its overall ambiance. They longer they stay here, the closer they become to the earth. This represents a new beginning in the relationship between soil and daily life. 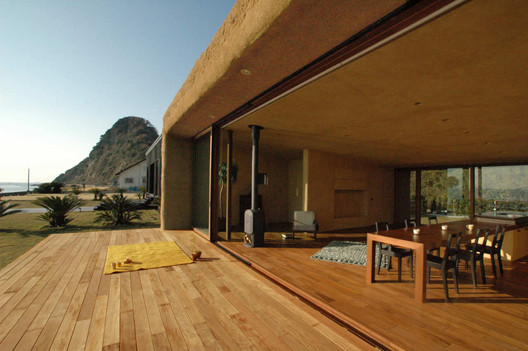