The Museum of the City of New York is host to several exhibits focusing on the architectural environment of the urban setting. Through February 5th, the museum is hosting a collection of Kevin Roche’s work in Kevin Roche: Architecture as Environment. This exhibit features elegant projects that span through Roche’s career and features variety of styles and influence throughout.

For more on this exhibit, follow us after the break. 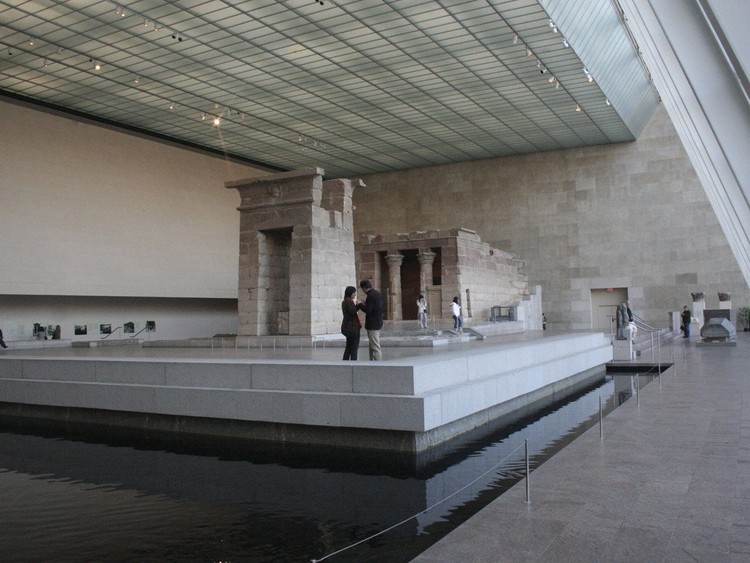 Kevin Roche: Architecture as Environment is somewhat of an on-going retrospective of his work which has evolved since his arrival in the United States in 1948 as a young architect. He worked under the guidance of Mies Van der Rohe and Eero Saarinen before opening a practice with partner John Dinkeloo. The exhibit is an exhaustive visual articulation of the variety of projects Roche has developed over the span of his career. Ranging from urban and suburban office buildings, to sprawling factory plans, pavilions and installations. His work and writings, which are also part of the exhibit, demonstrate a curiousity of the built environment and its integrative with the natural world.

Take for example the Ford Foundation Building, located on 42nd Street in Midtown Manhattan. The project, completed in 1968 by Kevin Roche John Dinkeloo and Associates (KRJDA), features a grand atrium that is open to the public and fosters a landscape of trees and plants. The whole space is open and well-lit by natural light, providing workers within the building to experience the atrium from their offices. The extensions to the Metropolitan Museum of Art also gives profound emphasis to the integration of the greenhouse ambience to interior spaces with plants, ponds and glass roofs that blend interior and exterior space.

Both projects, as well as many others, are thoughtfully presented with photographs, drawings, sketches and models that shed light on the process of design. The firm’s unbuilt works are represented here as well, all of which feature a sensitivity to the experience of the transition from building to street – in the delicate way each facade is rendered and designed – and from within. This is especially notable in projects that are located in dense urban environments. The span of projects reveal different influences over the course of Roche’s career. For example, the unbuilt Hudson Hills Research Lab, designed in1986 for New Castle, NY, is reminiscent of Le Corbusier‘s Venice Hospital, designed in a structure known as mat building that features modularity and sprawl over a landscape.

The curation of the exhibit stays true to its name, Architecture as Environment, providing a look into the sensitivity of Roche’s design to their influence on their context. Visit the Museum of the City of New York at 1220 Fifth Ave at 103rd St, NY, NY 10029. The musem is open seven days a week, 10am – 6pm. More to come on the The Greatest Grid and The Unfinished Grid that is also currently on exhibit.