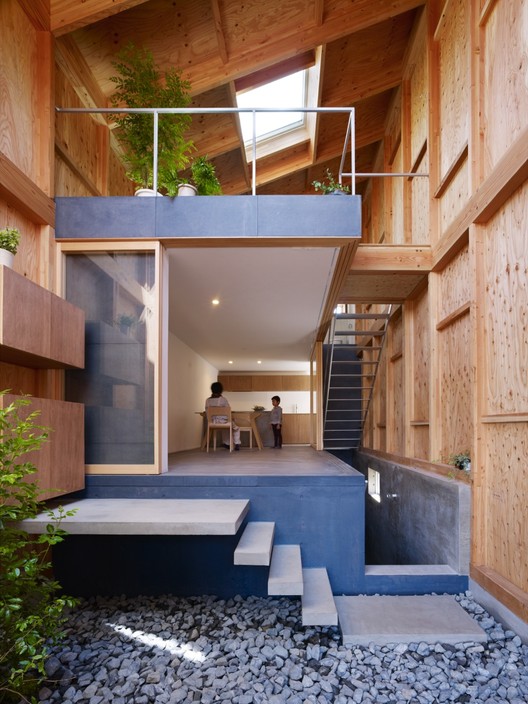 Text description provided by the architects. We have all ways have been interested in Nature.

Nature that expresses time and change are some aspects that we try to incorporate in Architecture.

Everybody feels and knows that the sky, sea, and forest are big but why does everyone feel this way? Would it be that when a person feels lost in the scale of things they start to feel that the thing is big.

Scale is something important in architecture. That it why always think of size and height. If nature and architecture were to be the same and to have a close relationship with each other then when the scale is taken away from architecture or scale is added to nature then there might be a new relation ship created between architecture and nature.

The house in Seya is on a small site located in a residential area. The client works in a flower shop and wanted a house that looks in harmony with flowers and vegetations.

It is the norm to erect walls to enclose a space for a building but for the house in Seya we decided to enclose the outer space. This resulted in the creation of a space where it is neither a garden nor a room.

The outer shell was built like a wooden storage and once the residence moved in to the space, by time there will be an increase in plants, book shelves or painting in the space will have the same quality as what nature where everything is in a state where it is neither finished nor unfinished.

It was important that the client accepted that this architecture was in the process of change and that it came from the idea of adding scale to Nature, which resulted in the nature become closer to architecture and an architecture closer to nature.

The creation of this uncompleted space gives the space the quality to accept any kind of elements to be placed and give true strength to the versatility of the space. The uncompleted state can produce a rich space and we would like to continue to think about thee kind of space.