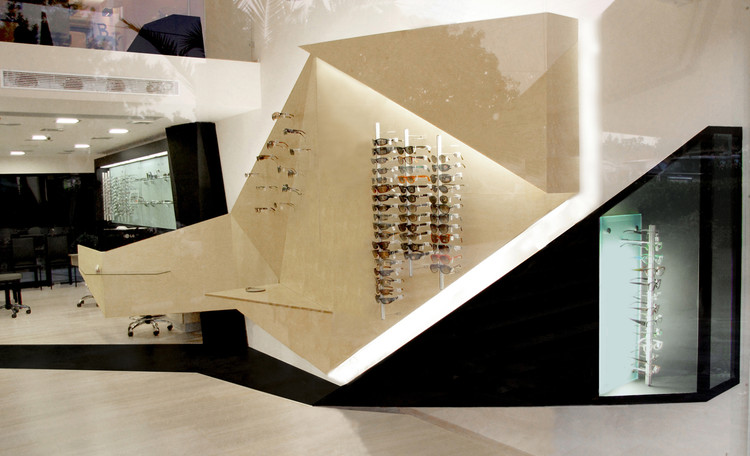 It is a ground floor store with a narrow, three meter façade on the street. There is also a basement and a mezzanine. The client asked for a clear separation between sunglasses and vision glasses, as well as between glasses for young and more mature ages. The insistence of the client on these matters, between ages and product, brought to surface “obsessions” of my own on this matter, like the “Acrobat on a ball” painting (Picasso,1905) which is a metaphor of youth and maturity, of the light weight and the concrete.

Seen in that light, this architectural gesture could be characterized as a simple metaphor, an experiment of space that is founded on the coexistence between these two elements: the soaring and the grounded.

Having that in mind, the youth products are placed on free standing surfaces that seem to hover above ground, whereas the products for more mature clients are sitting over a solid rectangular volume. This volume also stands as a storage space for all kinds of products.

The separation between vision and sun glasses in achieved through the materiality of the display surfaces: the vision glasses are placed in surfaces of black iron and the sunglasses are nested on surfaces of plywood.

Another issue that usually rises in such gestures is the equilibrium between the two poles:(youth-maturity) and (iron - wood), like the synthesis of Picasso. The two poles are clearly discernible but not entrenched in different corners; they create a dynamic dialogue among them within space, covering, folding and running parallel to each other. The iron surface extends all the way to the mezzanine, where the contact lenses are nested.

The effort to create a harmonic synthesis of different elements, (youth-maturity and wood-iron), was also adopted in the organization of the programmatic areas, like the cashier, the storage, the display benches, tables and surfaces.

In that aspect, these areas are not expressed as different elements, but as parts of a wider whole of continuous and cross-meeting surfaces. These surfaces evolve to different positions and dimensions in space, from floors to walls. This way they become the cashier, the storage, the display benches, tables and surfaces, or even the floor, through a unified form.

This “organic” continuity can be experienced not only visually, but also with our own body and touch while these forms, guide and funnel the visitor within the space. People will eventually lean against the cashier bench, over the display table and step on the iron floor.

The process was based on cladding strategies used on larger scale projects with non orthogonal geometries, like the Walt Disney concert Hall in Los Angeles. The complex topography of the side wall forms was analyzed to smaller triangular or trapezoid surfaces. The forms are separated into two basic elements: structure and “skin”. The structure was laser cut iron members that were welded and mounted on the side walls, forming a “skeleton” that would carry the “skin”; the plywood surfaces. All surfaces are mapped out, numbered and cut “sur mesure” from 2.50X1.20m plywood sheets. 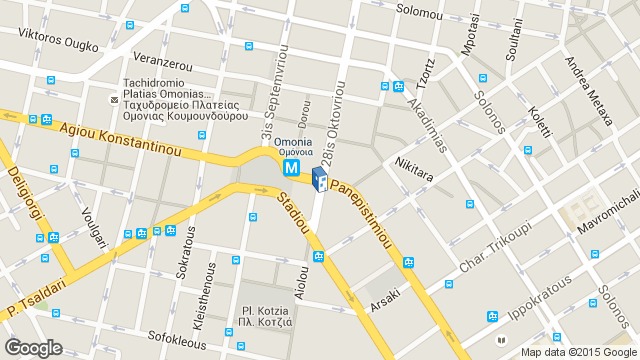