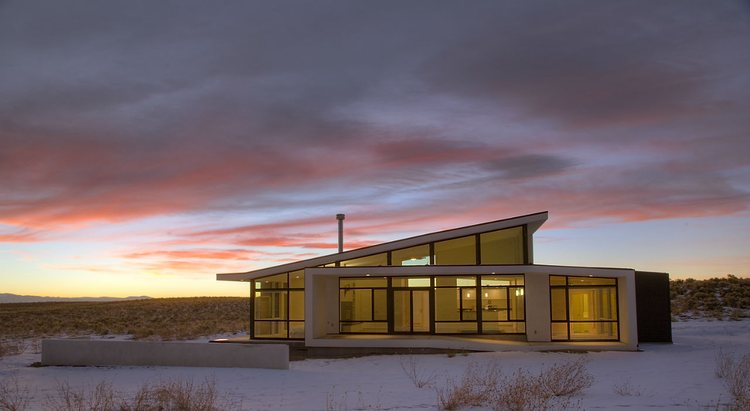 This project is a response to a client’s desire to build a small retreat in the high dessert of the San Luis Valley (elevation +8,500 ft.) with stunning views of the Sangre de Cristo Mountains and the Great Sand Dunes National Monument. The area is known for its serenity and environmental uniqueness. The house is designed to not only respond to that environment but also to take advantage of the unique spirituality of the site.

The house is conceived as a single volumetric enclosure that wraps and folds around itself to form and define three major interior spaces and tie the house to the landscape. The primary interior space is used for living, dining and cooking. The two other spaces flanking the primary space serve as master bedroom suite and a traditional tatami mat meditation space adjacent to an outdoor room that is used as a Zen meditation rock garden. Large areas of glass are used to capture the views, allow for passive solar orientation and blur the distinction between inside and outside. The house is designed to be relatively inexpensive both in construction and maintenance. As the property is remote and off-the-grid system and, having more than 300 sun days per year, the 1,600 sq. ft. house is powered with a solar energy photovoltaic system. The seven-acre site has been left undisturbed to the fullest extent possible.