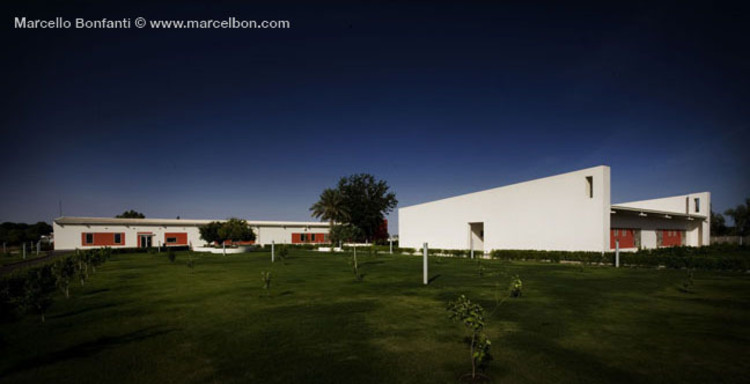 the idea of a "hollow" space and a pavilion-based system;

the choice of the best possible technology given the context;

the search for an ethical language for this type of architecture.

The hospital has been developed around an empty space, physically and ideally occupied by two enormous mango trees, located at the centre of the site (a plot of land on the banks of the Nile about 20 km from Khartoum). This is a symbolic space from which all the trajectories along which the building grew, were born.

In line with traditional housing structures, the hospital is configured around a hollow space, creating angles, perspectives and sensations that are forever changing and are never monotonous. The hospital's courtyard is a world of its own; an ideal separation between the internal microcosm - bound, protected and protective- dominated by the symbolic figure of the trees, and the external macrocosm- hostile and scorched- that calls for protection.

The hospital's buildings, that "embrace" the courtyard, have been designed in the form of a pavilion. Their reduced height inspires in patients and hospital staff a sense of "homeliness" that is also present in many details and that attempts to reduce the idea of being hospitalised. This is a philosophy that aims to create a cosy space where patients can feel as fully-fledged "subjects" with a right to an often missing respect, rather than mere "objects" of care.

The design of the structure tries to mitigate the sensation of feeling lost and away from home so typical of hospitals; rather it tries to build a working and healing place where proximity between people and spaces is encouraged.

Temperatures often exceed 40°C in Sudan for long periods of time, often reaching and exceeding 50°C. It is this aspect of the Sudanese climate together with the presence of fine dust generated by the strong desert winds that has led to an in-depth study of the right type of insulation, cooling and filtering technologies. These technologies allow to reduce the energy consumption levels of the hospital while at the same time guaranteeing maximum levels of comfort. Based on the principle of passive mitigation, one of the first measures taken was that of building a highly performing wall made of two layers of bricks separated by an insulating air cavity, with small windows. These windows are closed by highly performing glass panels with low emissions.

Shrubs and trees were also used to protect the buildings from the heat and to mitigate the effects of the harsh climate. Also important from a practical and aesthetic point of view was the use of traditionally crafted thatched roofs for paths and areas for rest. This was derived from a traditional technique for bed-making.

The use of the above-mentioned measures has greatly reduced the need to rely on energy-consuming cooling technologies. It has in fact meant a more efficient use of locally available resources such as Nile water and solar power. The latter, collected by 1000 sq meters of solar panels, is thus used more efficiently to cool the large quantities of air needed for the entire building.

Having solved the complex cooling issue, the next important step was that of understanding how to best filter the large quantities of dust and sand in the air without having to rely on costly and complicated filtering devices.

A simple, mechanical solution was found. The air is designed to pass through a series of tunnels- a labyrinth like structure- before reaching the air conditioners. By doing so, the impact of the air on the walls of the tunnel will allow the sand to sediment while at the same time cooling the air by reducing its speed. A fine spray of water at the end of the tunnels further eliminates the finer dust from the air and cools it down even more. The system needs very little maintenance work- limited to cleaning the tunnel-like structure- and allows the air to reach the conditioners filtered and 9°C cooler than when it enters the system.

The technological solutions that were sought were thus context-specific. In a country with very low levels of technology and with harsh climate conditions, the key features of the work were simplicity and innovativeness. Contrary to the practice of providing "third world" structures for "third world" countries, it was thus possible to prove that with innovation and low-cost technology we can guarantee the same standards of efficient health care as in any other Western health care centre.

In designing the hospital it was important to imagine a "face" that could best represent the philosophy that underpins it. Every detail of the building, as mentioned above, is aimed at making patients and staff feel at home. Above all they are aimed at highlighting the fundamental values of caring and preserving life. The details of the building are therefore the "face" that represents these values. Residing in the hospital will make the patients, and other observers, of any sex, race, colour or belief come together under the common roof of fundamental values such as cohabitation and hospitability.

It is difficult at this stage to gauge the social and cultural impacts of such a structure in the area of health care, both locally and at an international level.

Emergency's intention in developing a pilot "gem" project was not only that of responding to the urgent healthcare needs of the country and the area, but above all that of setting the precedent for a project that conceives free healthcare as a fundamental right even in "Third World" countries.

The special care given to the details of the project both from an architectural and idealistic viewpoint responds to this overall intention.

The average temperature in the Sudan is 29°C, and in the hottest months it can reach 45°C. In order to cool down the hospital, a number of measures were taken during construction. In addition to this, air conditioners were installed after the building was constructed.

In the first case, a series of insulating techniques were used. The external walls for example are 58cm thick and contain an insulating cavity that prevents the building from heating up.

The use of traditional cooling systems would have implied high levels of electrical energy or fossil fuel consumption (the needs in terms of volumes of air to be cooled down are hefty: 28 000 m3).

In a country rich in oil resources, Emergency has sought out alternative sources of clean energy: the sun.

Nine containers left Italy for Khartoum with 300 solar panels, bringing to the country an almost unknown technology, and one that is very seldom used in Europe.

Each collecting item is made up of a number of copper tubes that contain water; these are themselves placed in insulated glass tubes that allow the water inside the copper tubes to heat up. The water transfers the accumulated heat to an insulated 50m3 tank that keeps the water at 80-90°C. The heat is then cooled down to 7°C in two "chilling" machines.

Solar power thus allows to produce cold without discharging any particles in the atmosphere, and limiting the use of electric power to water circulation pumps. Two regular boilers have also been installed in case the solar power is not sufficient to run the two "chilling" machines.

The cold water is used to lower the levels of heat in the rooms that need to be chilled for medical or other purposes.

The machines used for this last part of the cooling circuit are called UATs (Units of Air Treatment). There are 8, each one designed for a specific area of the hospital (CPR, surgery, administration, etc).

The UATs draw air from outside and "force" it into a 7°C tube that cools it down. A second system of tubes subsequently transports the cool air to various hospital rooms according to need. 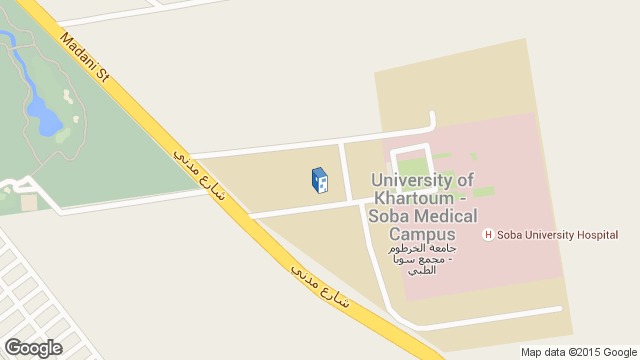 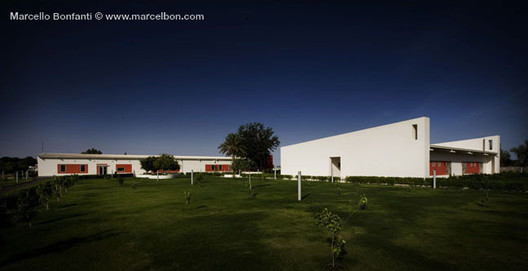