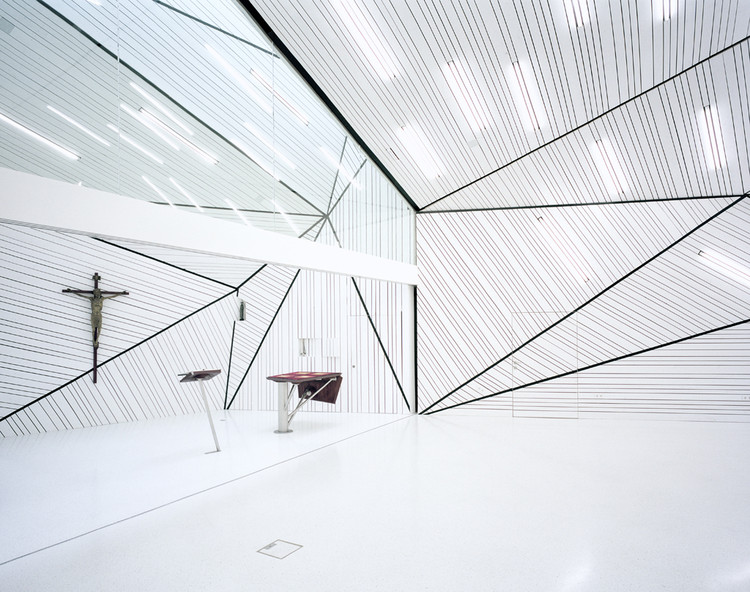 The office for pastoral care in the diocese of Linz, to be located on the site of the steel company voestalpine, is to serve liturgical as well as secular purposes. The plot of land lies as a “no-man’s-land” between main roads and industrial estates and is in need of a new strong character.

The study of man and work within the steel company led to a complementary addition to the site through its “built landscape“. Existing woodlands serve as a conceptional starting point, an “oasis for the people”, and the new built landscape retains this character by being embedded within a hillside. Conventional church buildings would not be able to achieve their independent meaning in this area as the voestalpine’s site is mainly dominated by relatively high buildings.

The building’s main artery, which cuts into the hillside, runs towards the entrances and widens as it approaches the green space, finally leading up to the woods along a sloping surface. The embankment, made of dark slag-stone, is either poured into the embankment or processed as pebble dash. The cross, the edge of the wood and meadow as well as the wooden shed are situated up against the edge of the building. The planting increases in density starting from the lawn, via a diversity of plants, towards the coniferous forest. Climbing the roof via walkways and stairs, one passes the steel car port as well as the garden associated with the apartment and youth area.

The “scenic” concept also determines the interior. The development divides the functional areas including offices, meeting room and workshops from the social and religious areas including cloakroom, bar, event room and the chapel. The recessed “bell court” radiates a contemplative mood with its squares and its bell placed at ground-level. The hollow space under the bell serves to distribute the sound (like the bell in the mining shaft).

A wooden and white coated shell divided into triangles unites the chapel, event room and bar as the main rooms of the social area. This crystalline geometry creates an important meaning encompassing Saint Barbara as patron saint of both pastoral care and mining. Two sliding walls enable a choice of separate or connected rooms for different events. The open room as a whole inhabits the chapel and bar and thus establishes a unique openness and integration. 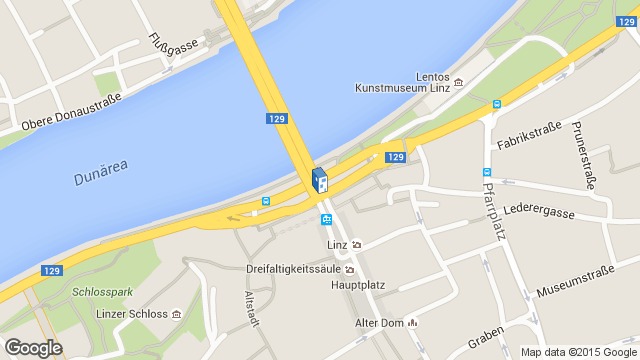 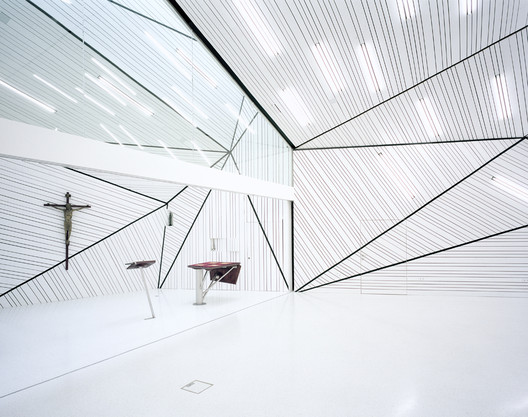