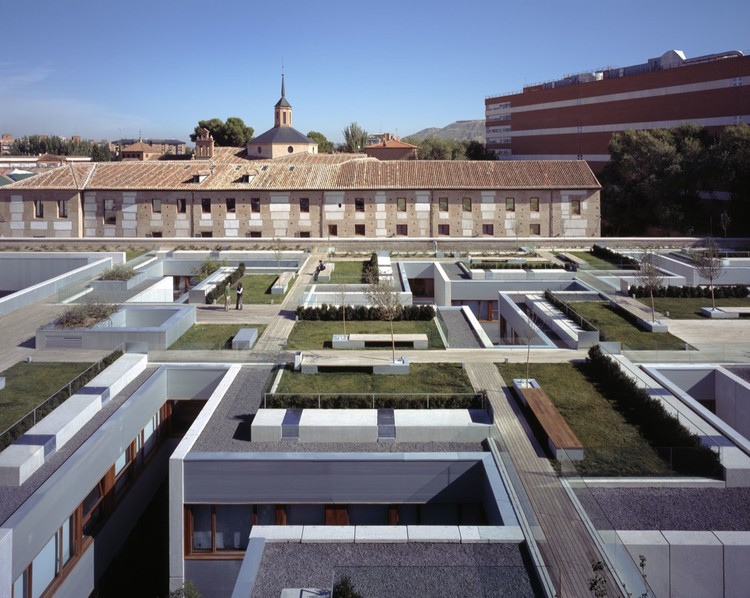 The building of The New Parador is the result of a long team process originating from the initiative of Paradores de Turismo to organize a contest that convened a selected group of Spanish architectural offices. Paradores de Turismo searches for an emblematic architectural solution in a difficult and delicate location such as The Old Complex of El Colegio de Santo Tomás. Dating from the 16th century, the Complex was in use (lastly as a female penitentiary) until very recently, when it was destroyed by fire and abandoned.

The project behind this new Parador has been widely welcomed in both national and international architectural arenas, peaking at the “On Site” exhibition on Spanish Contemporary Architecture at The Museum of Modern Art New York MOMA.

The Old Complex of El Colegio de Santo Tomás is composed by a church and an adjacent cloister following the standard scheme of the monastic Spanish architecture. Attached to the building and limited by the original monastery brick walls, the space was used to accommodate the garden and cultivation area.

The accomplished work strategically recovers this duality between the monastic building and the garden space linked to it. And it is this premise that inspired the proposal slogan presented to the contest: to construct a SCULPTED GARDEN, where the new building required for the Parador does not surpass the height of the ancient perimeter wall, and extends under a vast perforated garden, sculpted by multiple and diverse patios forming an interesting catalogue of spaces to the adjacent rooms.

We were aware that the project presented to the contest had a great potential for success, since the organizers had shown a great concern about the shape and the insertion of a new building amid the protected historical surroundings. Our proposal concealed the unavoidable new hotel building under the cultivation garden and behind the walls separating the monastery from the city, while recovering at the same time the footprints of The Old Complex of El Colegio de Santo Tomás.

In the presence of an old building, we create a new atmosphere. The Old Architecture must be RE-PRESENTED (brought back once again into the present) with mechanisms and languages of our contemporary background culture. It is not just a matter of restoring or renovating, but of revitalizing. We approached El Colegio de Santo Tomás as doctors ready to heal and recover the patient. Applying GRAFTS of new architecture, the existing pathologies were solved. New fragments of contemporary architecture worked as acupuncture needles to revitalize the old organism, the dismembered building.

The inherited architecture from El Colegio de Santo Tomás has been restored to its original state, followed by an intervention of the present time, based on the search of contrasts and differences that help value and highlight the pre-existences: the ruins and the glass, the wood and the metal, darkness and light…

We have worked in a double timing: old vs. new, in a progressive process of continuous architectural and constructive decisions, completing the discovered remains of the old building. In the building of El Parador de Alcalá, we have operated by layering. In an almost romantic view of restoration, the ruins - a fragment from the past – have been enhanced by the presence of new elements made of contemporary materials. Contrast is once again achieved: OBJECT-BACKGROUND.

With this contrasting aim, the cloister has been recovered, closing its arcades with new timber frames stepping back from the arches stone ashlars, hence using a present language. In a parallel procedure, a new cubic volume was inserted in the space of the main staircase, which connects the two stories of the cloister. This new black metal cube revitalizes and gives character to the inherited original space.

The need to host a large area for reception and dining rooms led us to duplicate the pre-existent cloister, hence obtaining a sequence of three reception halls separated by the two patios, which in turn can eventually be used as an expansion of the indoor spaces. The new cloister presents metallic contemporary facades with industrial metallic mesh lattices, which work as “monastic” filters between this new patio and the exterior.

There are as well two linear constructions remaining from the late 19th century, when the building was used as military headquarters. These depict big arcades and large windows in the facades, which needed to be preserved due to the protection status of the buildings.

Nevertheless, after preserving the supporting front walls and the space between them, the roofs could be replaced to optimize the use of the higher floors. We used L-schemed elements that project from the old walls, working once again the dramatic contrast between the pre-existing brick and the new glass and steel. In the back façade, a new evolving skin is displayed, operating as a filter for the rooms, which are protected from view from the near-by sculpted garden.

The adopted solution of displaying large green garden and patio surfaces, always linked to the hotel rooms, responds to the will to offer a new environmental space both green and horizontal vs. a vertical façade tower building. To summarize, The New Parador seeks to become a site that, although loyal to its original traces, is able to offer a whole new world of spaces and emotions, inviting guests to better understand the monastic world of cloisters and patios – a world inherent to the city architecture of Alcalá de Henares - and clearing the path to a modern contemporary understanding of Architecture. 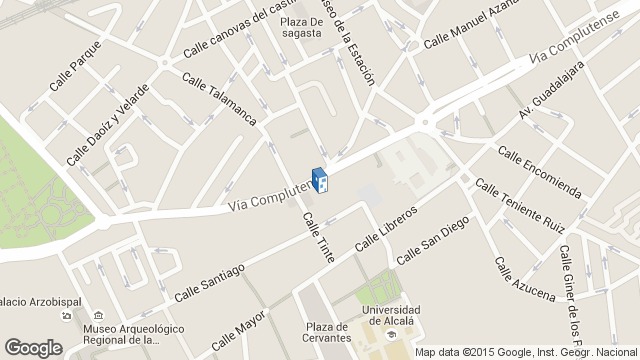