Save
Church of Miribilla / IMB Arquitectos 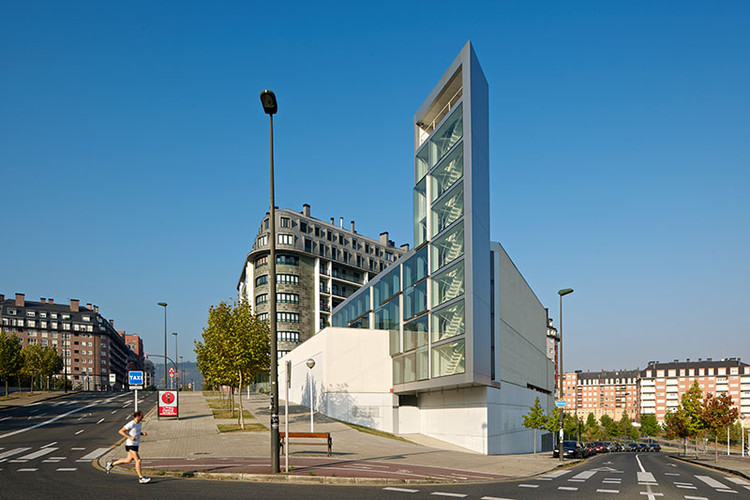 The organization and formalization of the spaces for worship, with the desirable connotations of representation, expression and symbolism of religious practice, have been resolved in close relation to the terms of shape, topography, solar orientation and its relationship with the surrounding urban environment.

The vertex formed by the diagonal and the park’s street is the plot's most visible point from any perspective of the immediate environment. The project areas converge towards this point, led primarily by the orientation of the temple, where the entrance is located to the west and the altar at the east end.

From the specific perspectives of Miribilla Boulevard and the diagonal street, this vertex provides the opportunity to identify the new temple within the existing building profile. Faced with the building large scale and the topography downward, raising the new building at this point allows unambiguous identification in the urban landscape.

From the necessary and timely austerity required by the rules of the competition, have concentrated efforts on pointing out the building through a single element able to express, symbolize and represent the role of religion and to organize, articulate and characterize the formal and environmental qualities of the interior spaces.

This single element consists of a prism of glass, supported on a structural grid of lightweight metal that is inserted between the significant volumes of the building causing a groove along which are held indoors. This prism’s grid of glass surfaces forms a three-dimensional mosaic, with different volumes and textures, which captures the natural light from the south and distributes it inward in different directions.

The temple receives horizontal lights, flush to the ceiling, from the top of the right lateral wall in the south. As a counterpoint, the facade facing the northeast introduces lights flush to the ground through a longitudinalThe remaining units, parish offices on ground floor and parish units on the basement, receive zenital light along a double-height longitudinal courtyard.

On the contrary, artificial indoor light diffusely illuminates the prism, expressing the temple image outwards and in particular towards Miribilla Boulevard.

The modelling of the volumes surrounding this bright prism, which represents a three-dimensional interpretation of traditional stained glass, features smooth wraparounds, simple, easy and economical construction which enclose the entire services program and the areas demanded.

1.2. RELATIONSHIP WITH THE FUNCTIONAL PROGRAM

The organization and distribution criteria for the activities program respond to the shape and topography of the plot and are also in close relationship with the structural and constructive organization of the building.

Two significant volumes articulate around the longitudinal glass prism. The highest one, shaped by a large bays structure, contains the temple's main hall. The second one, consisting of a structural bay of 7 m. wide wraps the previous one drawing the shape of the plot. This volume contains the rest of the uses program distributed on two floors (level 0 and level - 1) to suit the site’s topography. A third floor, at level - 2, incorporates a parking program with two possible alternatives.

The main entrance from the pedestrian street located on the west, leads to a porch and a reception hall that serves as the distributor to the three main activity blocks: temple, parish offices and units. This hall’s distribution allows the independent operation of them all.

The whole temple, daily chapel, sacristy and penitential chapel, are distributed so that their respective areas have a high transparency and continuity, even though each bounding, height, texture and light has a specific character. The location of the sacristy, in connection with the church and the daily chapel, enables and facilitates the procession inside the temple. The baptistery singled out by the entry of zenital light, is located at the entrance to the temple, in the immediate space to the reception hall.

All the parish offices and locals occupy the rest of the ground floor.

The parish offices at level – 1, adapted to the structural modulation, pivot around the parish hall for 100 people and a large perimeter lobby which participates in the spatial organization of the building through the longitudinal and two small courtyards which capture light and ventilation. This level has two possible entrances: one via the stairs leading to the main lobby and another one on the opposite end, towards the vertex of the plot. Both entrances can be practiced regardless of the ground floor. The second access is both an alternative emergency exit.

Vertical communication is solved with stairs and an elevator that meet strict legal requirements for accessibility in force.

At level - 2 a parking is arranged with access from the lowest point of the site, in the north corner. The ventilation of these rooms is materialized directly through the facade. The graphic document shows two alternatives for up to 14 or 26 vehicles respectively. 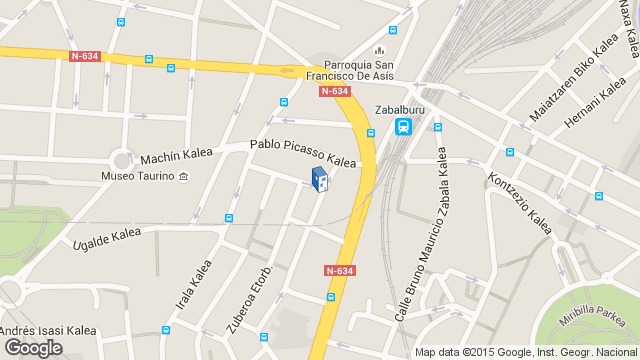 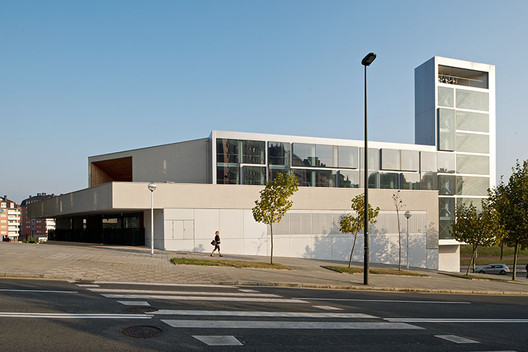 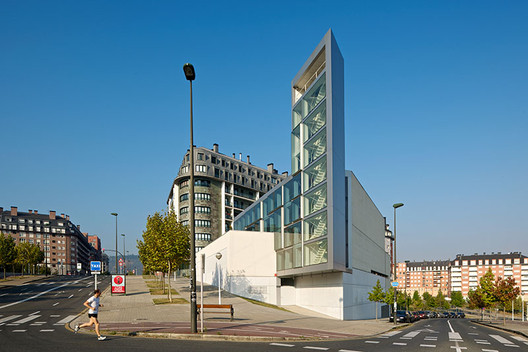