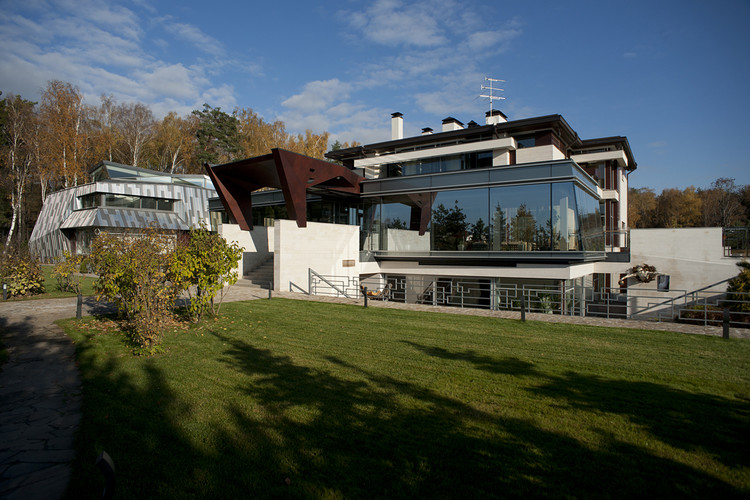 Text description provided by the architects. Before summer 2010, when PAPER | TOTEMENT was invited to design some new constructions, the house territory had been already changed a few times with new additions that were not within the scope of the initial project – a summer kitchen with a sunshade ground and a guest house appeared. It was clear to them that further development of the initial architectural style meant a complete loss of at least some consistency of constructions on the site or it could be overwhelmed by a lot of buildings. Besides, it would continue an architectural idea which was absolutely alien to them. Therefore, they decided that something absolutely different in contrast to all that was around not only on the given site, but also along the territory which one can see at a glance, would allow the house to receive a new status, a new quality and a new scale. More images and architects' description after the break.

We decided to inoculate, to implant “another's flesh”, to create an outgrowth, resisting with all its force to the current architectural reality, absolutely dull in its individuality and at the same time creating an awful, motley and elaborate landscape of near Moscow with its fences and settlements making a sad and terrible impression with rare exception, despite plenty of money spent for this "Russian Shanghai". Our applied task was quite simple. The family of our client increased, and there was a lack of certain facilities. We had to increase the main house area by attaching a recreation zone and a children’s zone to it. The additional space had to be found out from the outside without interfering into the house layout as it was not possible to change anything inside.

Logically a recreation and reception zone was found on the existing terrace located above the swimming pool. A nursery playground was a more difficult task. As there were no free areas either inside the house or around it we decided to reconstruct the guest house located to the northwest from the main house and to built one more floor with a warm passage to the main house.

We reached the final architectural decision from different points of view, combining or rejecting positive and negative functional necessities and possibilities, technical problems of reconstruction, the budget and terms (1 year passed from the first sketch till the building was built, we were 1,5 months late, which appeared to be insignificant, taking into account all the difficulties of winter season conditions for building). And also it was an architecture as our point of view regarding the situation at the present moment.

The section is divided into two glass parallelepipeds with inclined walls displaced over an axis of symmetry of the existing house. Remaining static enough, they suite to a nursery with their light shifts and inclinations of walls. In the left part there is a “lady’s” drawing room, in the right part – a “man’s” one. The woman’s part has an inclination to the man’s one, which hangs over the swimming pool more defiantly and reflects the children’s section. Both parts are connected and separated by a peak with an air intake at the top.

The children’s section is made blind with several cuts for windows and a lantern in the roof for a contact with the outer world. It “yet” has no certain form and is connected with the main house by a certain “umbilical cord” – a passage which has one point of support, it develops and looks into the “future”, letting in a warm southwestern sunshine through long horizontal cracks of windows and the lantern. The front material – painted aluminum - was chosen first of all due to functional reasons – snow bags, problems of water disposal and some other peculiarities of the Russian climate. But also it has a dynamic painting which “destroys” or “washes away” the plane when watching from a short distance.

We tried to get the most dynamically directed, but incomplete form, as though it was “made” by a child. Inside it there is a graphite white-grey-black box-roof space, which varies depending on the time of the day and sun position. Its inside planes and capacities are moving and have not found their final position yet. They are like clean sheets with moving shades of people, trees, lamps and themselves on them.

This is the game of “full” and “empty” – and it is the main architectural idea of the house. Open and closed, the past and the future, connections and ruptures were what we were interested in this project. Both houses are difficultly implanted in the existing complex (we are grateful to all the designers and partners we worked with), each step concealed in itself an uncertainty and need to make flexible decisions.

Our final stroke we made on the roof of the glass extension. It was a "tattoo" made as a black-and-white labyrinth which the owner of the house could see every day when walking out on the balcony of his bedroom. Once and for all it has changed the picture of the place at least for one person, it confirms that the inoculation has taken place and the only question is what it will change in future.