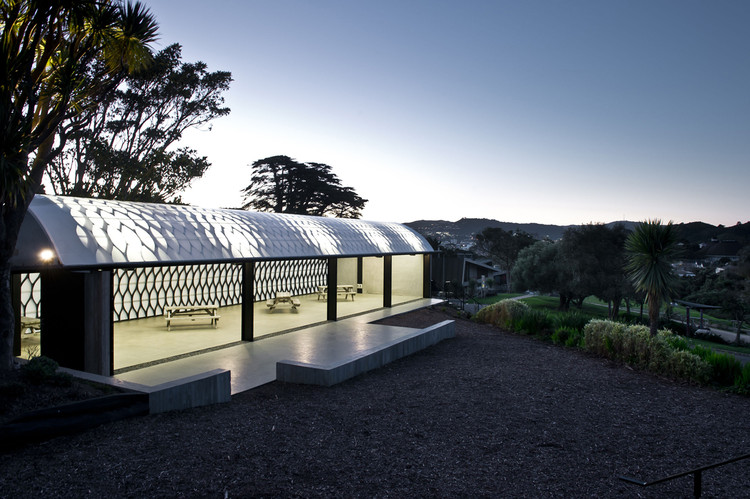 Wellington Zoo is situated within the Town Belt - a verdant public reserve that arcs around the hills of the central city and suburbs. Unoccupied flat land within the zoo grounds was a rarity when architects Justin and Louise Wright identified the potential of the sun drenched north facing site beneath a man-made duckpond, a disused elephant mounting stand, and the dilapidated elephant house. Kamala, the last elephant at the Zoo died in 1983, ending a half-century era of elephants resident at the Zoo.

From the southern downhill approach the existing elephant house archway entry opens into a casual dining courtyard. Little was done to the existing facade save for earthquake strengthening to the dome topped arches, minor repair plastering and a colourful new paint job. Fixed bench seating was added to the courtyard walls, which together with painted timber picnic tables create a casual dining court for the kiosk style food, ice cream and coffee.

A translucent canopy roof supported on Laminated Veneer Lumber beams soars atop the courtyard and over a low-slung building that contains the kiosk together with back-of-house service rooms, a catering preparation kitchen, public toilets and secure staff access to the Scaly Nursery reptile enclosure. A covered corridor connects all of the staff service areas and facilitates easy loading from the adjacent service vehicle delivery zone, which is also now separated from the public areas with well defined landscape treatment.

On the public side of the building, the reptiles are presented basking in ventilated glass fronted cases within a substantial wall of rammed earth. The earth was sourced from excavations within the zoo grounds and is stabilized with cement to counter erosion. Since the site is in an earthquake prone zone, the rammed earth is also steel reinforced, and protected from stroller wheels with steel rails to match the handrails. The 4 habitats, each with photographic vinyl backdrops, step downhill with viewing via a gentle ramp.

A transverse wall in rammed earth sections signals the end of the Scaly Nursery and leads toward the public toilets, and to the southern end of the pavilion. The short link allows space around an existing mature cabbage tree (Ti Kouka/ Cordyline Australis) and provides dedicated access to the toilets and reptiles when the cafe and pavilion are occupied. The link is sheltered by a cantilevered roof of folded steel sheets that resulted from a paper folding study in the architecture studio. Slots between the rammed earth sections allow glimpses of the rain water tanks which collect the water for use in the public toilets.

With a clear span of almost 7m and length of 21m the pavilion, named Kamalas after the zoos last elephant is open on the east side to avoid the worst of the wind and face onto the green Town Belt. The structure comprises a concrete slab, two precast concrete end walls, and a steel frame to support a vaulted tent structure.

The vault is supported at the north and south ends by precast concrete walls, which also contain service slots for the power, data and audio visual connections required during events. To the opening east face, double channel steel posts support a folded steel plate over, which acts as a rain gutter and neatly conceals roll-away clear plastic doors. The gutter plate extends beyond the ends of the pavilion, terminating with rain chains over rock filled concrete pipe water catchers for the gardens below.

Extensive and collaborative design and prototyping was carried out for the vault framework. Justin Wright worked with structural engineer Alistair Cattanach from Dunning Thornton Consultants http://dunningthornton.co.nz over several months and through many iterations to arrive at the final solution which was thoroughly tested with up to 1:1 prototyping prior to final confirmation. The 4mm aluminium shape, fabricated and assembled by Fraser Engineering http://www.fraser.org.nz was cut on a turret punch complete with holes for assembly. The shape was then pressed into the radius of the final vault on a form press, and powder-coated in gloss black paint. On site, following a precise set-out and erection of the steel frames, Fraser Engineering assembled 716 of the curved elements, weighing 1.5Kg per piece, working horizontally to position in place with around 1400-1500 turned aluminum rods through the pre punched holes. Finally, 1400-1500 tube gussets were riveted to the curved elements to balance the torsional forces in the structure and complete the vault framework. The pavilion assembly took approximately 3 weeks.

The pavilion is clad in a lightweight plastic membrane commonly used on agricultural tunnel houses. The opaque film lends a bright translucency to the pavilion interior, with interesting effects in both rain and sun. When the stunning late-afternoon shadow play from the western trees wanes, artificial lighting takes over and the effect is reversed, illuminating the form of the structure to the exterior at night.

Apart from the concrete slab floor and end walls, the pavilion is essentially a flat-packable product design. The longest steel element is 7.2 m, therefore the metal works are transportable in a 30ft shipping container.

The Hub was officially opened by the Wellington mayor Celia Wade-Brown in September 2011. The NZ Designer's Institute awarded Assembly Architects Ltd a silver “Best Award” in the Spatial Built Environment category for the Zoo Hub project. 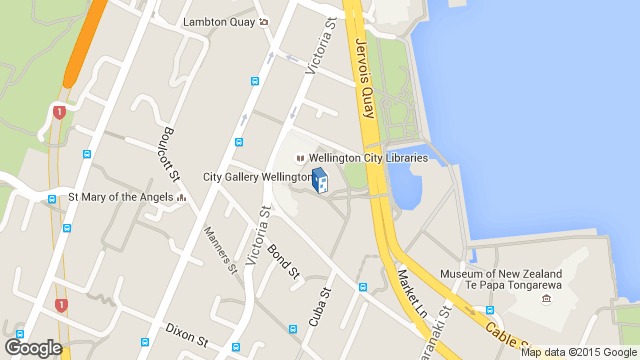