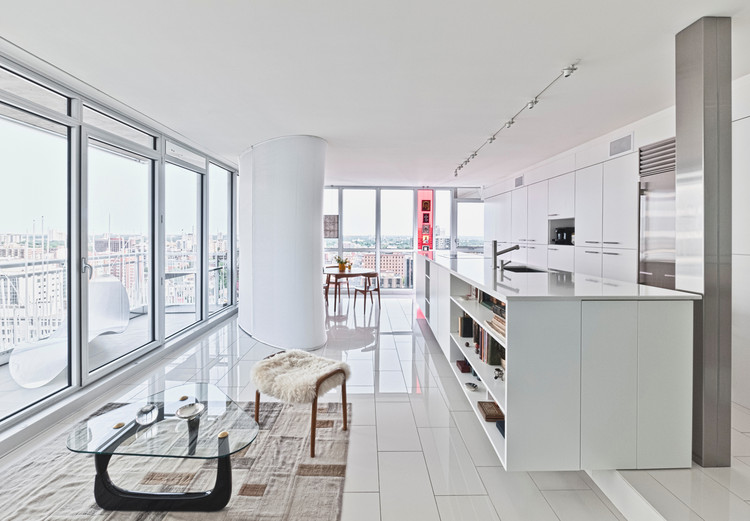 Text description provided by the architects. The redesign of this developer unit rejects the model of large homes that segregate “served” (public) space from “service” (private) spaces; as is clear in the original layout of this unit, most urban apartments simply cannot comfortably create two such distinct types of spaces. Hence, reasonable “modern, urban living,” in an architectural sense, involves the dynamic and poetic use of poché, the conventional "service space" of any home (bathrooms, storage, closets, structure, service chases, etc.)

Even after the existing partitions of the unit were removed, the resulting interior did not appear spacious due to a jumble of variously shaped, large mechanical units and columns, as well as a wall that ran the length of the unit that at times projected forward as much as a three feet. The space was too small for the use of multiple features to address each of the many visual encumbrances; the solution required a general “clean up” of the agitated perimeter and a single, primary design move to address all of the columns and mechanical components, deployed in a manner that would not recreate the initial situation of separate rooms each too small to properly function.

The perimeter was regularized by a continuous floor-to-ceiling wall of cabinetry, which nearly doubled the amount of storage provided in the existing layout. The form of an ellipse was then used to create enclosures that both concealed the most egregious central mechanical unit and column, as that shape yielded the intended result with the utmost spatial efficiency. The area left between those two infrastructural items creates a closet. A differently-proportioned ellipse was used to conceal the remaining column and to create a clothes closet. To maintain a visually unified interior the same form was then used to create the shower. Thus, the shower, generally one of the most private of spaces, becomes the focal point of the unit. (How many apartments can boast a shower with a 270-degree view over the city?) The two closet ellipses are made of silk stretched to steel frames while the shower is made of curved glass with the same silk over its exterior.

Whereas the initial bathroom (like most bathrooms) required a sort of private circulation space between its fixtures and the shower, the new layout recuperated that “lost” space by removing the shower from the bathroom altogether. Without the shower and its attendant circulation space, a toilet and sink are fit into depth of the long storage wall. Near the entry, a urinal, (bathroom technology engineered to minimize splashing) is the solution to providing a drinking bowl for a very large dog with sloppy drinking habits. A study housing a work station, shelving, and the keyboard of an electric piano fitted to a drawer are likewise folded into the depth of the storage wall.

While the location of the ellipse housing the mechanical unit was predetermined, the second fabric ellipse and the shower ellipse are calibrated to inflect the movement throughout the entire apartment with nuanced delineations of a sleeping area, dining area, and a living area. Opaque drapery stored within the cabinetry that moves on tracks fit within the ceiling allow for complete visual separation at the rare moments when such privacy is desired.

White porcelain tile is used throughout to further unify the interior, but likewise its reflective properties contribute to an entirely luminous interior. The tiles extend onto the balcony to visually link it to the interior. A “garden” of fibre-optic acrylic rods that sway and make sounds in the manner of reeds is placed around the edges of the balcony. Thus, the balcony that is most often a token condominium feature (ironically fated to become the storage place for bicycles and unused furniture) here creates a vital outdoor living room whose garden aspect, even in the winter, creates a serene visual counterpoint to the bustle of the city beyond and below. 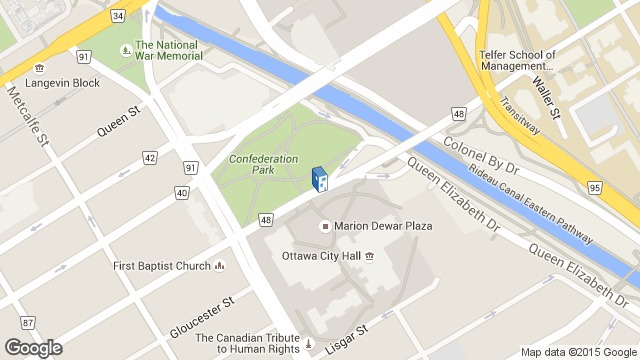