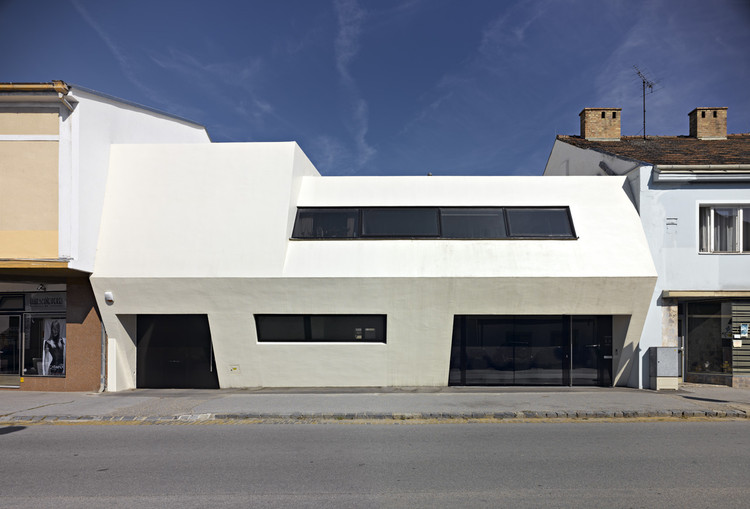 In the rural Weinviertel region of Lower Austria individual examples of new architecture are generally introduced with caution and reticence. This makes it all the more surprising when suddenly, on a busy street in the densely built-up part of the town of Mistelbach (population 13,000), not far from the main square, you come across a white monolith that speaks a self-assured architectural language.

Building Cast in One Piece

The dwelling house with doctor’s surgery presents a closed facade towards the street. However, not only has any possible severity in its appearance been alleviated by intelligently conceived folds with dynamic edges but, in conjunction with the white color used, the building appears friendly and inviting.

On taking a closer look you realize that the monolithic impression made by the building was not achieved solely by means of its form but also through the special way in which the white façade is coated. This synthetic, resin-based coat is continued across the walls and the roof, dispenses with separating joints and conveys the impression that the entire building was made as a single piece.

The living area, which is separated from the noisy outdoor space and is reached through a driveway, is located behind the doctor’s surgery. Whereas patients can enter the surgery directly from the street, the residential part on the garden side has its own entrance in the yard. Two cars can be parked under a “bridge” connecting the two buildings which also serves as a carport, and the living areas can also be entered from this sheltered space.

All the spaces for everyday life such as kitchen, living room, parents’ bedroom and child’s bedroom are located on the garden side. This makes the dream of living amidst green surroundings in an urban setting a reality for this pair of doctors and their small child. It was even possible to meet the client’s wish for a study with a view of the church tower. This space is on the upper level in the “bridge” and is lit from a green courtyard that was made between the site boundary wall and the bridge structure. All the existing walls to the neighboring properties were preserved and increased in height, thus maximizing the privacy of the outdoor living space in the garden.

The simple elegance of the exterior of this reinforced concrete building is matched by a reduced, calm color concept that is used both inside and outside. Black is combined with the repeated white of the façade, in the form of coated metal it defines all the entrance areas and openings, making them contrast clearly with the building shell.

All the fittings and furniture, both in the surgery and the living area are white, from the surgery to the kitchen and the bookshelves. In the doctor’s practice a functional, light grey synthetic flooring was used, in the living areas such as living room or bedrooms a white-oiled oak parquet floor was laid. In the corridors, the closets and the building services room the white of the façade is repeated.

The entire outer corner of the entrance area was clad with black aluminium panels. Inside this area is light and is lined with white glazed birch plywood. Black solar protection glass was used in all the windows on the southern side of the house, the street façade. A milky, plotted film, based on graphic design by the architect, was applied to the glazed front of the waiting room. The pattern of pixels is semi-transparent, allows plenty of light to enter and, for patients waiting to see the doctor, it provides the requisite privacy towards the street.