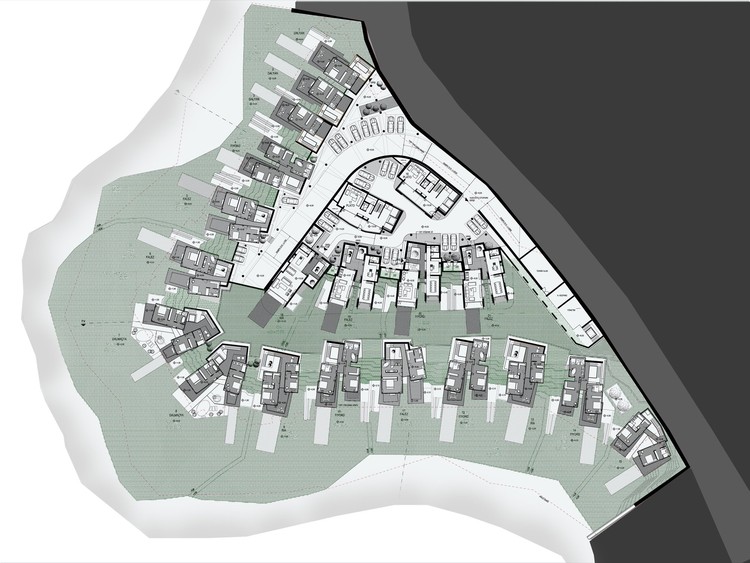 A large structure group is not expected to be seen along the strip that extends between the sea and the coastal road from Bodrum city center to İçmeler till the shipyard region. It can easily be claimed that this strip that’s kept its natural texture, contains a surprising freshness for the eyes that have been used to the density that exists in the castle side.

Vicem Residences are located on a rocky tip along the coast line. The tension that is arises from the conflict of the coast’s untouched quality and the presumable dense physical pattern that is going to be built on the site, emerges as the most crucial fact of the design. In this sense, the settlement scheme is treated as an experimentation of mass fragmentation that loosens the phenomenon of the stereotypical “large single house” that also deals with the three dimensional topographic problem which develops in the axis of landscape apertures and functional relationships as well as with the contextualization the natural qualities of the place.

In order for the buildings to collide with the natural texture and even to dissolve into the rocky site, the lower sections of the masses that sit in the ground contains as much as possible, a natural surface articulation. The upper parts that sit above them, in fact that only subtly touch them, are proposed to have a light, evanescent sense as they are fragile structures that are designed sophisticatedly.

The landscape arrangement is also fed from the same context axis. It is aimed to achieve an arrangement that is suited for the genetic pattern of site which is mostly a rocky tip, that exploits the effects of the different surfaces of the natural rock that is found in the area rather than having it overly planted.