After a 2 week break, AD Futures is back to bring you the best young practices from around the world.

This time, I choose a practice based in Medellin, Colombia. Why did I choose them? Paisajes Emergentes (Emerging Landscapes) has a very unique approach to landscape architecture, which has made them win several competitions. Most of those competitions weren´t even landscape specific projects, yet the result is always a built environment which becomes a new landscape – not just limited to small interventions but as the base for the whole project: sports centers, parks, public facilities, libraries, etc.

Also, they have a very good representation technique, that in my opinion is able to transmit the proposed atmosphere the landscape will create over time, not as a brand new shiny project  but as an evolving project becoming one with its location.

Enough of my words, and lets see the projects speak by themselves:

With minimal intervention on the original soil, the 400m2 house is displaced over the plot.

The apertures in all the facades are determined by distant and near landsape events selected with the client.

The roof becomes the main facade when you arrive to the house, and is the first thing to appear visible, it simply emerges as a geometriced version of the terrain in which the house in located. 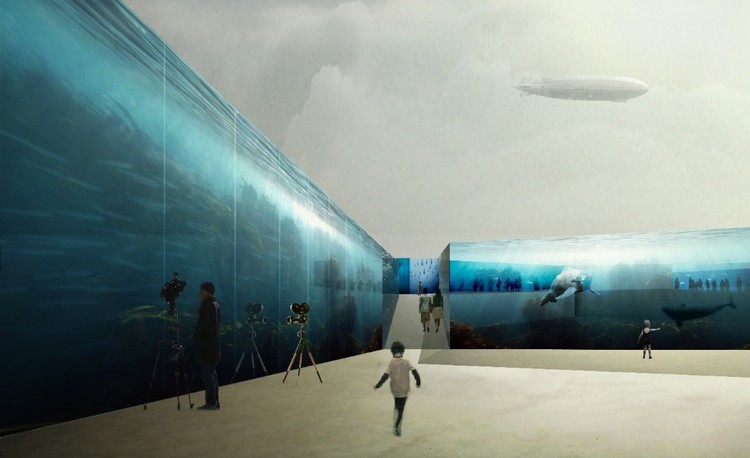 The acuatic gardens tha surround the pool competition areas allow a constant relation of swimers and a live ecosystem. This areas are planted with species that are capable of biorremediate the water in an all natural cleanning proccess similar to a natural wetland.

The service areas (bathrooms and dressingrooms) are below the water garden level articulated by open air yards that are the only apertures in the flooded zones.

The park as a living museum of the slow death of the city.

The Venice lake is colonized by an artificial reef system that intends to recover, keep and protect a living fertile ecosystem. With the change of the tides the reef emerges and disappears partially.

inside the canals the light and water level reveal the passing of the hours. Eventually the canals get flooded and become unwalkable.

The surface of the island is covert with as many seeds and spores as possible, the strongest and most capable species will impose and some months later there will be a completly unpredictable, wild and convulse garden.

The island coasts are the main circulation system, no paths and no program.

“I draw, not with ideas, not with stones; but with light and air the way of my transit.” Octavio Paz

Naos, Water clock house and confined forest. The residential and workshop constructions of the city of Venice, Murano and the other islands are colonized by contemplative uses as they are abandoned or become obsolete . Roofs are removed, walls stay, new gardens emerge, sitting rooms that will eventually get flooded. New decks, galleries, small parks and public thermae appear within the old walls in an unplanned way.

“there is nothing built on stone. Everything is built on sand, but it is our duty to edify as if the sand should be stone” Jorge Luis Borges

Inside the canals the light and water level reveal the passing of the hours. Eventually the canals get flooded and become unwalkable.

The runway of the old airport is completely flooded to generate an active hydrologic park.

In August 2008, a design competition was launched to generate ideas to convert Quito’s Mariscal Sucre International Airport after its planned closing in a couple of years.

According to the organizers, “the coming availability of 126 hectares of space with a flat topography, located in the midst of a consolidated area, which thanks to the decision of the Quito Metropolitan Council, will be transformed into a park, constitutes an exceptional event and a unique opportunity. This leads us to rethink the city and to take advantage of the opportunity to set forth solutions to multiple issues linked to: changes in the use and building capacity of land; improvement in mobility and transversal connectivity; expansion of infrastructure; provision of green areas and public spaces; improvement in environmental conditions, recovery of urban landscapes and environment; improvement of the quality of life of present and future inhabitants of the city.”

Per the competition brief, water has to be central element in the design. After all, the organizers refer to the future park as Parque del Lago.

In response, Paisajes Emergentes flooded the 3-kilometer runway to create an “active hydrologic park,” which they then partitioned into 6 programmatically discrete areas.

2. Relatively clean water from the wetlands is then used to fill an open air aquarium. The tanks here contain fluvial species from tropical ecosystems.

3. An aquatic botanical garden comes next in this hydrological assembly line. Whereas the faunal variety is showcased in the aquarium, tropical plants are the main attractions here, though both are equally essential to maintain any kind of a robust ecosystem.

4. From there, water moves into circular water tanks, where it is mechanically oxygenated and filtrated. And the organic material coming from the botanical garden is removed from water. Pedestrian walkways involve people with process that are usually is hidden in every city.

6. Finally, we come to a recreational lake, where the water is collected in subterranean tanks to satisfy the need of irrigation systems and general maintenance of the park before.

Additional activities are also programmed adjacent to this central pool. For instance, the old terminal building is turned into a convention center. Soft materials and walls are removed, and the remaining forest of columns confines 3 theaters inside hanging gardens.

Open air aviation museum. “…my favorite building of the XX century is the Boeing 747” Norman Foster.

All over the golf field diverse planes from obsolete Ecuador fleet now appear scattered. this area is then colonized spontaneously by wetland species. water from the botanical garden is guided through canals to specific spots where the spontaneous vegetation is predicted to grow.