Text description provided by the architects. Designed by Zimmerman Architectural Studios of Milwaukee, Wisconsin, the Sheboygan Police Station is a municipal facility that was awarded an AIA Wisconsin Merit Award in 2011.  Perhaps the most signature element of the architectural scheme would be the blue glow that emanates from the structure --- a revered and feared image standing as a symbol for law and order in the community.According to the architect, the 30,000sf police station was design to identify programmatic redundancies and deliver optimal flexible space without compromising the functional aspects of their service.  In doing so, the plan was organized around a primary circulation spine, which allows the different police divisions to share common space and circulation while maintaining a necessary sense of interdepartmental privacy.

The public lobby and the fleet garage serve as the anchors of this east-west circulation spine with the various programs found between them and accessible via the corridor.  By locating the departmental divisions on the southern and northern periphery of the structure, nearly 95% of occupied spaces within the station enjoy natural daylighting (reducing electrical loads and providing necessary stress relief to the office workers).

Perimeter offices are designed in accordance with the Energy Center of Wisconsin's Cool Daylighting program in order to reduce energy demand.  This natural lighting strategy provides glare-free and comfortable lighting levels by balancing light entering through continuous transom openings at the ceiling with carefully placed vision glass. The placement of vertical windows caters to security issues for the police with equal parts privacy and views and develops a regular rhythm on the exterior façade.

The exterior of the police station is clad in a monolithic burnished concrete block intended to convey a sense of stability and security. The upper walls are clad in a silver metal panel in contrast to the dark gray deep ribbed metal panel accenting two projecting bays that define an external division between the public and internal functions of the police department. 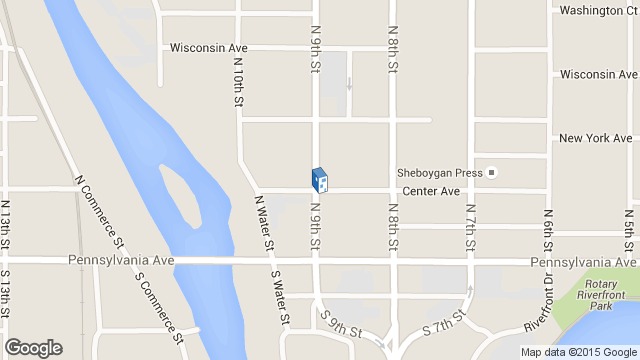