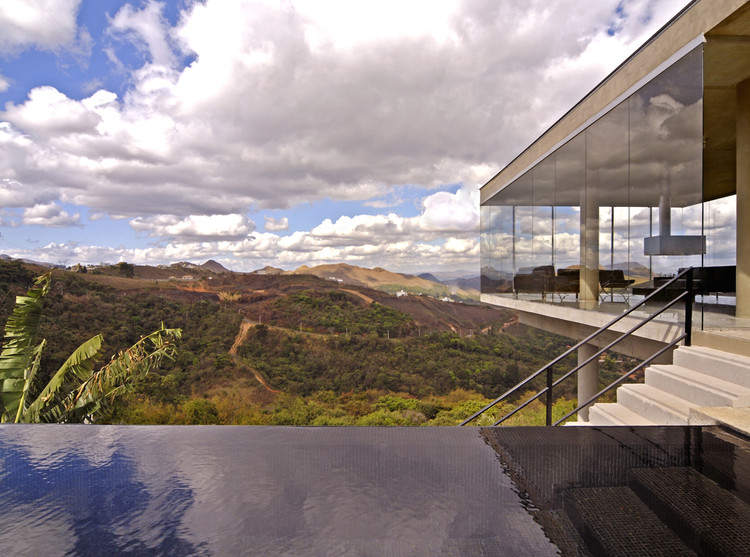 Text description provided by the architects. The premise of the project was to have a house as a platform with all the spaces in a single level (which should be as high as possible to take advantage of existing views). The owners had already purchased a lot, and off comes the complicated topography of the proposal.

With an average incline of 68% in the front of the property (more specifically in its first 10 meters), the ground presents the first obstacle to overcome: land works. A first simulation had a ramp going up but the cost of displacing dirt was so high that the idea was not feasible (the cost of moving earth and building foundations for the ramp exceeded the price paid for the property). In addition, this ramp would use more than 60% of the area, which made impossible the implementation of a project according to customer requirements.

So we opted for a cut in the front lower part of the lot a strip of about 16 ft for parking. A retaining wall 13 ft tall holds the remaining earth and access of the residents are provided by an elevator. The house is almost 50ft above, a longitudinal body that opens to a sun terrace oriented north (remember, in the southern hemisphere the sun is north of all). Its eastern end is moved according to the rules creating a belvedere-living room with 3 glass walls that give the residents 180 degree view.

The structure of the house is conventional: 16 columns (resting on a pile base) holding the main body: alongside a pair of longitudinal beams support the floor slab, and another pair (in this case inverted) holding the roof slab, free of internal elements that also functions as an integrating element of the proposed spaces.

A void separates the private and social areas while also providing the connection to the lower level that houses a service area, a study, maids quarters and a sauna. As part of the functional link between the body of the house and the entertainment area, the terrace serves as an extension of the kitchen, freeing most space and avoiding the need for another enclosure for the barbecue grill and seating area. 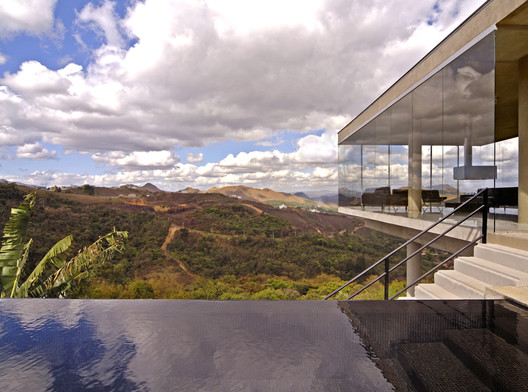