Text description provided by the architects. Located in the center of Wrocław, sport and leisure building designed by Major architekci, has been made for the nationwide competition and was awarded first prize. Main problem of the competition was to create a connection between two different schools built in the end of 19th century. High standard and multifunctionallity were first priority of competition for new building.

Sport and leisure function of designed building, combined with two large lobbies between schools, affects chaotic form of whole complex. We came up with the idea of perforated wall. With this screen, we have completed the frontage of buildings located along Nowa Street.

The screen was made with perforated Corten steel. During patinate process we're able to observe how the facade changes and becoming more elegant and coluorful day after day. Red color of the facade matches with old, brick-made, 19th century school and with the park area in front of the complex.

Perforated screen allows the optimal insolation of the glass facade and works as a fence for street ball field located on the roof. More than that, it works as a curtain and keep the gym out of the passers-by direct sight.

Interior design is minimal with a bit of industrial atmosphere. Sober interiors give us a perfect background for sport events, colorful kids activity and it doesn't compete with the old, existing school building. The only colorful mark is vivid orange corridor connecting sports hall with changing rooms and other facilities. 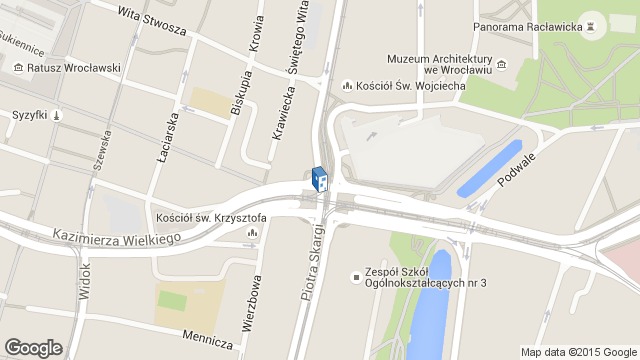