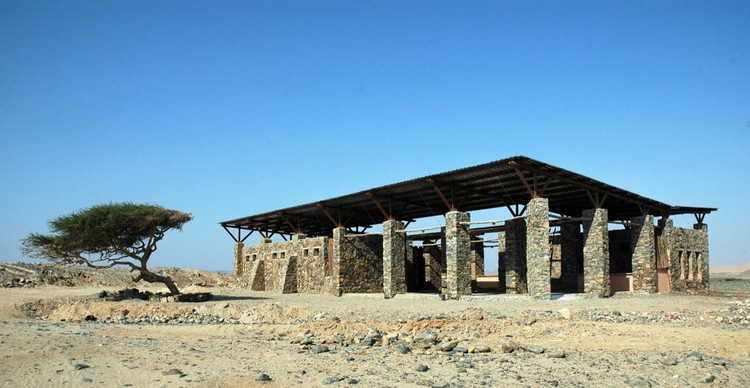 Text description provided by the architects. Located 50 km. south of the Egyptian Red Sea shore town of Marsa Alam, and an hour flight south east of Cairo, Wadi El Gemal National Park (WGNP) was officially declared in 2003, the 24th protectorate in Egypt primarily due to its striking landscape and important cultural resources. Stretching from the Red Sea coast to about 50 km inland, WGNP includes roughly 4,000 sq. km. of terrestrial habitat, and approximately 1,400 sq. km. of marine life, Roman ruins, significant religious sites, quarries, and indigenous communities. The combination of marine and terrestrial habitats represents an important integrated ecosystem, including coral reefs, mangroves, desert valleys (Wadies) and their associated vegetation and periodic floods. The Visitors’ Center is located at the WGNP’s northern entrance (N24 40 58.3; E35 04 51.0), situated as a focal point, on the top of a hill, along the western side of the Suez/Bir Shalatein seashore highway.

The one storey building is about 250 sq.m., and serves two main functions:

1- Orienting visitors and disseminating essential information about the park’s nature and inhabitants (Ababda tribes) through maps, brochures, tours, audio/visual and interpretive presentations of the surrounding features (Wadies, Mountains, Coast, Reefs, Fauna and Flora). The main purpose of the facility is to increase Visitors’ appreciation of, and sensitivity to, the distinctive natural, environmental and cultural resources of the area, and to aid the Egyptian Environmental Affairs Agency in securing the sustainable use of the bountiful assets of the region.

2- Reception and welcoming pit-stop, that is predominantly open, serves basic Visitors’ needs such as refreshments, local crafts. In addition, it houses office space, a store room and provides ample uncovered parking at its front entrance. Restrooms are housed in a separate annex.

Conceptually, the design of the building was inspired by the acacia tree, the only tree type abundant in this arid desert. For the Ababda tribes, the acacia is considered the reference point in the open wide desert; offering the much needed landmark, shade for gathering, and a source of nutritious pods, branches for construction and firewood. Similarly, the Visitors’ Center was designed to offer the shade and shelter where multiple activities can take place.

The site is extremely remote (50km from Marsa Alam, 850km from Cairo). While its location offers it a one of a kind pristine character, it cuts the site from any construction material including fresh water which had to be imported to the site. The remoteness of the site from any utilities advocated the necessity of designing the building to be self sustained, but also was a major hardship during it construction with no access to electricity or running water. The immediate idea when a visit to the site was initially paid was to use local building materials and local labor to build it utilizing low technology building methods. 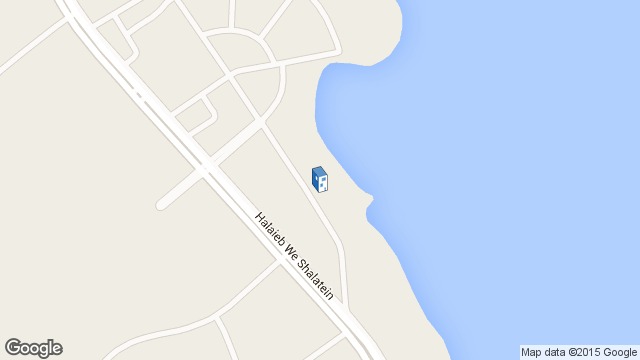