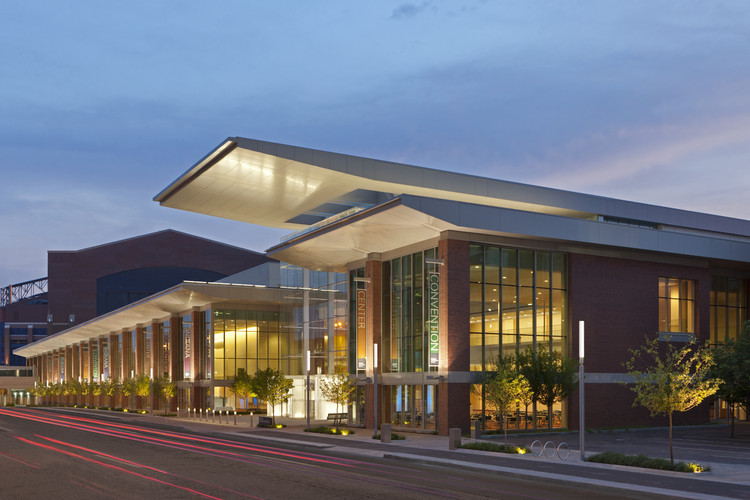 Text description provided by the architects. In 2006, the Indiana Stadium and Convention Building Authority selected RATIO Architects to create a major expansion to the Indiana Convention Center as a response to ongoing increased convention and trade show demand. The more than 700,000 sq. ft. expansion includes exhibition space, meeting rooms, and pre-function and support space – all within a tight urban site in the heart of Indianapolis, directly connected to 4,700 hotel rooms and within easy walking distance of restaurants, retail shops and at the head of a new pedestrian/event street.

The project also features a climate-controlled pedestrian passageway between the Indiana Convention Center and the city’s new Lucas Oil Stadium. The 700-ft. pedestrian corridor includes a tunnel below highly-valued and heavily-used CSX and Amtrak rail lines that remained active throughout construction. The $275-million expansion of the Indiana Convention Center, together with facilities at the connected Lucas Oil Stadium, creates the 16th largest convention complex in the U.S., elevating Indianapolis to the top tier of mid-level convention cities. To mark its place as an Indiana facility, the Indiana Convention Center expansion is designed to recall the narrative story of the glacially-altered northern Indiana landscape coupled with southern Indiana’s bluffs. As a meeting place for major conventions and trade shows in an urban environment, the building’s design captures the welcoming gesture of a handshake.

A new entrance to the Convention Center is defined by a clear glass cube that provides expansive views in and out of the facility, encouraging both conventioneers and local residents to explore the new space. The glass cube is supported by four white steel columns, which can be illuminated with colors inspired by the convention taking place inside. As a meeting place for major conventions and trade shows in an urban environment, the canopy over the cube extends a welcoming gesture to the visitor.

The materials used in the expansion integrate the new facility with the existing Center through brick, limestone and curtain wall glazing. The Convention Center’s interior design embodies the concept of Indiana as the “Crossroads of America.” Interior finishes and the overhead exposed steel structure reference the many roads, iron bridges, rivers and train tracks that cross the state through pattern, color and scale. Indiana’s four seasons, natural lakes and waterways inspired the facility’s warm interior color palette. Hues of cranberry, gold, warm brown tones, forest green, indigo blue and persimmon flow throughout the space, blending the expansion with the existing facility to create a seamless transition.

A main goal was to create a continuity of exhibit space to have one open, flowing and continuous space. To simplify building navigation and create continuity, the Convention Center expansion’s color palette is also integrated into the building’s informational signage. Inspired by the entrance canopy profile, small canopies located above meeting room entrances, and larger canopies above exhibit hall entries provide additional visual wayfinding cues. Circulation throughout the Convention Center is further celebrated by the inclusion of hanging bridges and a second floor concourse. The glass railing system provides unimpeded views of the facility’s activities and emphasizes overall expansion height. Skylights, exterior clerestory and storefront glazing infuse each level with natural light.

The design team used aerial photographs of Indiana’s topography as the inspiration for the floor covering designs found throughout the Center’s interior. Pattern, scale and color respond to the space’s monumental scale. Carpeting located at meeting room entrances imitates the undulating dune sand patterns found in northern Indiana. Connecting corridors are carpeted with a linear, grid-like pattern that references the state’s till plains. Carpeting in pre-function areas is reminiscent of the organic shapes found throughout Indiana’s southern plains and lowlands. The Indiana Convention Center expansion project’s exterior site design was an integral component to its overall design. So that the building could be woven into multiple layers of Indianapolis’ downtown urban fabric, the expansion’s exterior gathering spaces were designed to accommodate large volumes of pedestrians, significant bus traffic, a multipurpose Cultural Trail, and a future event street located just outside the expansion’s glass-cube entry.

• The glass cube element in the Indiana Convention Center expansion’s design brings large amounts of daylight into pre-function areas, lowering the need for additional electric lighting. In addition, the glass material used in the cube is high performance glass that manages heat loss more efficiently than a more traditional product.

• Two large holding tanks under the Indiana Convention Center expansion’s loading docks help to slow down the flow of stormwater that enters the public stormwater systems. The tanks also remove sediment from the stormwater runoff, which, over time, helps to prevent build-up in the pipes. As a result, the infrastructure will last longer.

• The Indiana Convention Center’s design brings natural light into the space wherever possible, through the cube glass elements and clerestory windows, lowering the need for electric lighting in the pre-function areas and hallways outside meeting rooms and exhibition halls. In addition, lighting control systems in the building turn electric lights off when a space is not in use.

• The City of Indianapolis opted to renovate and add on to the existing structure instead of using resources to build an entirely new facility outside of the downtown area – a decision rooted in sustainable practices that encourage re-using buildings.

• The expansion’s interior design called for wood, adhesives, sealants, paints and coatings with low Volatile Organic Compounds (VOCs), reducing the amount of indoor air contaminants that are odorous, potentially irritating or harmful to the well-being of the building’s users.

• The Indiana Convention Center expansion installed a mixture of water-saving fixtures in all restroom areas, minimizing the amount of wastewater generated.

• The Indiana Convention Center expansion uses a chilled water system to cool the building, rather than a refrigeration system, which is better for the ozone and the building’s interior air quality.

• The design team minimized construction waste throughout the project. While the RCA Dome was demolished to accommodate the Convention Center Expansion’s building footprint, about 90 percent of the RCA Dome’s steel was sold as scrap materials after it was demolished, instead of put into a landfill. In addition, almost 40 percent of the RCA Dome’s concrete was ground up and re-used on site for the Indiana Convention Center Expansion. Finally, the RCA Dome’s fabric top was re-purposed into collectible consumer products by local artisans who created bags, wallets and purses for purchase. 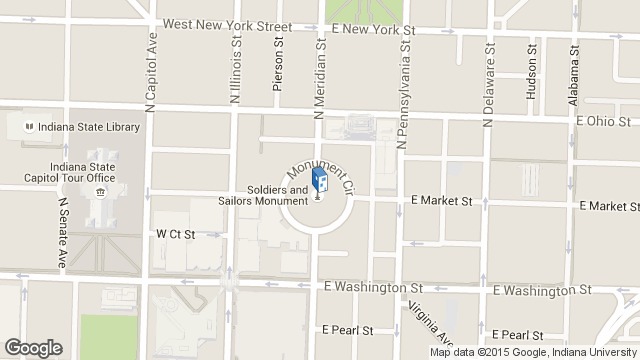 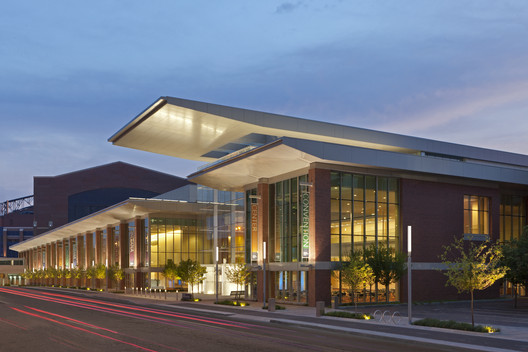