Text description provided by the architects. Our practice explores how architecture can develop a symbiotic relationship with its surroundings. In this project, a cabin that is a retreat from the intense experiences of urban living, we found a number of ways to develop this ecological model. We started with a strict set of site rules that govern the design and construction process. The most important rule is that the previously undisturbed site full of mature Douglas fir and cedar trees, some up to three feet in diameter with a dense marine underbrush including salal bushes would be left as undisturbed as possible. Secondly we focused on structural and material systems that not only reinforced the primary idea about non-disturbance but also took its clues from the efficiency of natural systems, primarily driven by lightness. Lightness talks not only of efficiency and conservation but perhaps a more esoteric idea that lightness can be an elevation of spirit brought on by a rich connection to site. Finally to address our needs for thermal comfort in this temperate environment we split the uses into two distinct zones one exposed and one protected, providing a way to enjoy the sensory experience of the forest but to have a warm protected refuge from it as well.

The site strategies included a foundation of minimally invasive concrete disks which raises the house up off the ground leaving the plants and wildlife to continue to grow. Collaborating with an arborist, we devised a system to allow not only the tree’s large tap roots to remain but also the very small capillary-like roots that trace through the top humus layer continued access to nutrients, water and sun. Another rule was the tight restriction of the area that was allowed to be disturbed during construction which was controlled by a fence that left only a very small working area surrounding the house. Though it made construction more difficult the final result was a building that nestles itself into the landscape. Finally from a planning perspective the driveway and parking which are located on a previously disturbed area that was separated from the house by a large portion of the site. A small path was created to connect the parking and the house, part of which was a ramp that bridges up to the house creating even more undisturbed area. The next rule was to connect the inside of the house with its surroundings creating an immersive experience. This is achieved not only through the generous use of glass but with light monitors built into the giant roof reaching up through the branches pulling in bright patches of the sun cutting through the tall trees. By conserving the existing characteristics of the site and connecting to the its richness, its complexity, beauty, and ever changing qualities can be observed and understood at all times.

Our use of lightness can be understood in two ways the first was literally the weight of the materials and the second the more difficult to define quality of uplifting the spirit. In order to achieve lightness in material we first worked to create a light weight structural system that efficiently delivered stability to the overall building. This prefabricated steel system relies on tension for support which greatly reduces the weight of individual structural members. Finally the roof , an extremely light system of structurally insulated panels or SIP’s. SIPS were plant fabricated off site and quickly installed as a series of simple large panels. These panels are not only light but are made highly thermally efficient due to the nature of their construction two layers of oriented strand board glued to a dense internal layer of insulation that is acting both structurally and thermally. Lightness in spirit is concerned with a more difficult thing to describe. Other than to say it comes from an intuitive sensibility, a sensibility about the brilliance of the seemingly mundane daily conditions which all play a role that subtly defines that elusive quality, a quality that lightens the mind and hopefully contributes to a healthy and nurturing way of living.

Thinking about how the rooms are used and how that can effect the thermal demands of them brought us to dividing the project into two distinct thermal zones, a living zone which is glazed and turns outward toward its surroundings connecting directly with the out of doors, and a sleeping zone that is heavily insulated and turns inward and is dark and quiet. This allows for a separation of climates so to speak. It came from our experiences backpacking where you spend the day outside and then at night you tuck into a sleeping bag inside a tent we look at it as a way to balance the differences between being exposed to the out of doors all day long and wanting relief, warmth and security as you sleep. It also has the added bonus of reducing the heating demands during the night. It was also important to us to push the edges of thermal comfort so as to again connect us to the qualities of the continually changing environmental conditions found in nature.

This approach that brings the building more closely aligned with the patterns cycles and systems of nature we feel has great potential for teaching and re-enlivening our connection to our environments and will ultimately lead to a more successful and sustainable way of living. 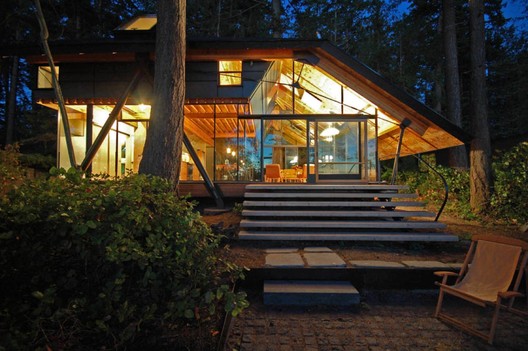