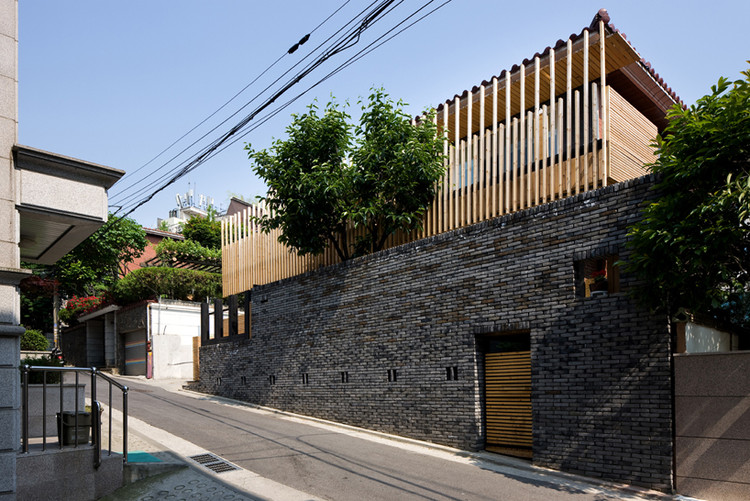 Overall appearance of the Seocho-dong area, a representative residential district in Gangnam, Seoul, was quite different from the way it looked in the past. Many of the earlier houses were replaced by high-rise apartments. Houses that were excluded from the apartment complexes were turned into low-rise multi-family housing units.

One of the main reasons Julia’s house could remain unchanged was it couldn’t belong to any type of housing that newly appeared and it was situated on a small plot in the outskirts of commercial and residential areas. Moreover, the owner said she couldn’t afford to purchase an apartment unit in the neighborhood by selling the house. She could neither buy an apartment nor build a commercial building, nor build a multi-household home. The narrow alley near the house was enlarged and turned into a road where cars run all day, and the house behind Julia’s home was transformed into a parking lot which exposed it to the cold in winter. In addition, the house in front of hers was changed to a 5-story multi-family housing unit blocking sunlight all day long. Despite such poor housing conditions, the neighborhood has beautiful landscapes surrounded by Mt. Umyeon and Seoul Arts Center. Moreover, she has tremendous assets in her good relationship with next-door neighbors, Stephano, Moses, and John.

The 4m wide street in front her house

Is an imprudent street that has no pedestrian path,

Is a disturbing street that looks directly into her inner courtyard,

Is an irritating street that demands endurance without a solution,

Is an ambiguous street that makes her confused over whether to wear shorts or not in the summer,

Is a frustrating street that makes her embarrassed over whether to gather up curtains or not,

Is a nasty street that deprived her of the freedom to enjoy delicious meals with her family.

If she has to live in a house which gets no sunlight without the street,

If she has to live in a house which allows no entrance without the street,

If she has to live in a house which allows no free travel to neighbors without the street,

If she has to live in a house which blocks views except the street,

If she decides to live in this house again,

How should I consider the street 4m in width in front of her house?

Is it a street or alley, or a road? Or, is it a moat in the urban city?

-First day I visited the house, excerpt from my diary

The first thing to be done to keep living in the neighborhood was to handle views from the surroundings. In particular, the house is laid open to view from the house in front. Although direct exposure of the inside of the house could be avoided due to opaque glass on the windows of the multi-household house in front, the problem was severe from the houses on both sides. She said one day while she was putting out the laundry, she was surprised to see a man standing on the balcony on the second floor staring at her house, while smoking.

Her inner courtyard and bedroom especially were directly viewable from the balcony of a commercial residential building on the left. So, she had to close thick curtains all the time even during the hot summer. However, the problem was the direction facing the south. If installing a screen, views from outside could be blocked. But, it could also prevent sunlight and wind from coming through to the space. I came up with two ideas for the solution. One was to partially lay bricks to cut off views from the next-door house and the other was to partially install a wood curtain on the slab structure on the second floor to let sunshine and wind freely come and go. Through this measure, all the disturbing troubles were resolved. What was needed most in repairing this house was to fix problems concerning views from the outside, rather than the house itself.

What grabbed my attention among external spaces of the house was the boundary between the house and the city. Usually, entrances of houses are adjoined with an alley. But, the house faces a road where a lot of cars go by due to the new apartment buildings constructed nearby. The alley was turned into a road. In this way, like a scene from a movie I watched, a not-so-funny thing might happen as an open entrance could be blown away by a car closely passing by just in time. Thus, I decided to create a narrow alley that connects the entrance with the city like a conjunction connecting words in a sentence. The alley which was created on a corner of the small external spaces of the house serves various roles. It is the place where Julia greets her father occasionally visiting her family, a place where she lets her neighbors into her yard, a place she adjusts her hair or dress on her way to work or a place which bridges the road and her yard together.

The house’s external spaces were complicated with miscellaneous things scattered all over. Two jar stands buried in the ground, outdoor stairs, a drying rack with only one wing folded out, a drying rack with both wings available, clotheslines tied between tree branches and drying laundry, a sculpture depicting a naked body which was a work of her daughter, a cross made of tin plate, two boxes full of ceramic works, jar stands filled with rainwater, outside air conditioner unit, a half-open tool box, viewing stones, dog feces, lily, chrysanthemum, good luck tree flowerpots, porcelain pots, morning glory planted along the fence, a persimmon tree, peony, chrysanthemums, a lilac tree, a pomegranate tree, a long bench leaning against the entrance, a broom and a shovel.

The only thing missing was a yard. I created a spacious wooden deck at the height of the first floor in order to secure external spaces to distribute the functions such as storage, garden, drying, exhibition and receiving visitors. In this process, separated the garden and the yard by cutting out the area around the existing tree with same size and shape and repaired the outdoor spaces after removing ceramic pieces to the daughter’s atelier or the edge of the pond.

The clock of the house stopped 38 years ago. One of the reasons to purchase the house was said to be 7 rooms which fit the number of the brothers of her husband. But, the family no longer needs all the rooms. Now, four rooms for each family member, coupled with a guest room, are enough. On the other hand, the family needed more storage space as household goods increased. The structure of the kitchen was not proper for large appliances such as large refrigerators and kimchi refrigerators to be installed. Their lifestyle changed significantly, but their living spaces remained unchanged. In addition, the house was dark. Although the house faces the south, the sunlight couldn’t reach inner spaces of the house due to its structure. Moreover, she has never dared to open windows of a north-facing room because of a parking lot. Now, the situation worsened as the newly built house in front obstructs sunlight and wind from reaching her house. I had to find a solution to let the sunshine reach deeply inside. The answer was unexpectedly simple. After I found a sunny place which is not influenced by the house in front, I cut out a big chunk of the floor of the place, inviting sunlight to the deep inner parts of the house followed by the wind. Now, they can stay cool during summer without an air conditioner and Julia’s voice urging them to wake up in the morning is clearly heard from the second floor, although it may be cumbersome for the son. 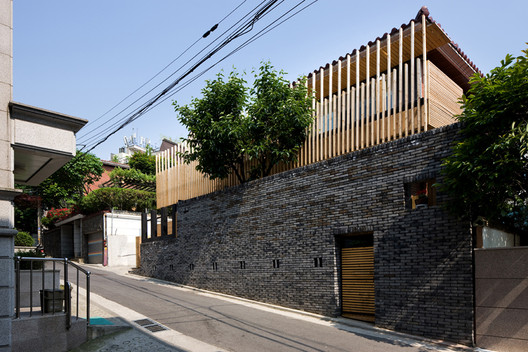