Save
Essence of the Desert House / AU Design Studio 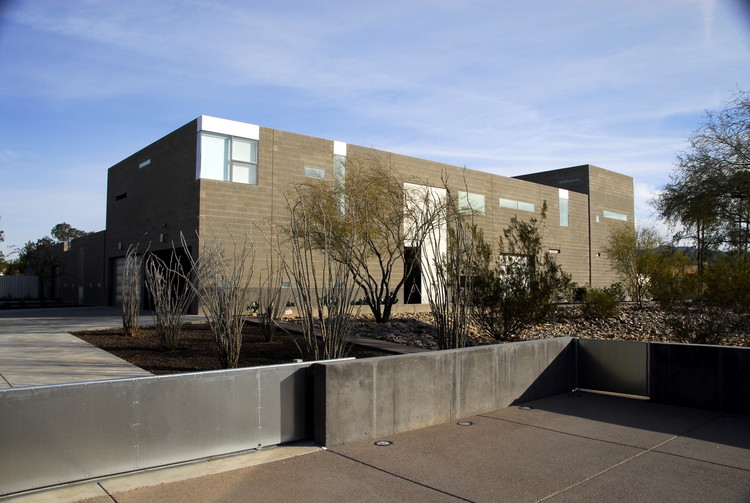 Text description provided by the architects. Amit Upadhye of AU Design Studio designed a house in the desert, capturing the essence of the native climate to create a dwelling sensitive to the phenomenological aspects of living within the desert. Memories and visions of boulders and shadows in the desert were borrowed in the formation of the project. It was through these borrowed moments of the desert that brought the concepts of micro-climates and desert living to the Essence of the Desert House. Through these observed micro-climates in the desert it was visible that life thrived, even within the harshest environments. These micro-climates act as heat sinks and as thermal masses. The Native Americans were aware of this phenomenon, often building homes in the shadows of such boulders. It is through this challenging and yet engaging nature of the Sonoran Desert that allows for meaningful and poetic dialogue between place and built environment, creating opportunities for natural phenomena to be translated into meaningful architecture rooted in the nature and essence of the desert.

Images of boulders were constant through out the design of the project, being used metaphorically to create the walls of the residence. These walls casted desirable shadows on the east and west parts of the project were the family would be spending most of their time. The house is separated from the garage by a two-story high chasm that runs north to south, acting as the spine of the composition. This spine connects the main house to the detached guest house to the north through the open patio.

Wanting to use the setting sun of the Sonoran Desert, Au Design Studio created a poetic gesture to be lived once a year on the anniversary of the couples marriage. A notch created within the wall of the master bedroom would become the end statement of their anniversary. Questions of what happened  at sunrise on the same day and also with the moon were asked. With the help of a student at Arizona State University, it was decided to bring this new dimension to the residence. A location was chosen on the eastern wall of the mater bedroom where openings were notched in that received daylight, allowing the sunrise to shine through and mark the anniversary of the couple at precisely 7am in the morning for one minute.

These openings are an abstraction of the front elevation windows of the house and get projected on the acid etched window in the double height volume of the kitchen. This kitchen wall is aligned on the summer and winter solstices where the celebrated expansion joint for the crevice brings in diffused light through the slot window washing down the wall. This slot skylight also acts as a light threshold between the public and private areas at the upper floor of the residence. Once could also see the moon rise from behind the nearby McDowell Mountains on the full moon day from their master bedroom. The kitchen's upper cabinets rise to about 14ft in the air to become the linen cabinets at the upper floor level, metaphorically like the stalagmites rising in the caverns and the light fixtures on the kitchen island come down like stalactites.

The south east frosted corner of the master bedroom tower also adds an interesting element to the entire composition. The top corner of the tower has been sculpted with 3 sided butt glazed glass like an eye of the Cyclops. The eye almost disappears against the blue sky. The eye glows in the twilight and becomes a beacon in the landscape. The master bedroom loggia has a double height fabric curtain that bellows with the wind adding softer texture with the hard concrete block. The bellowing curtain also pushes the corner of the home outward merging the inside to the outside. The outside of the house is mainly concrete masonry unit, poured in place concrete and glass. The concrete stem wall that rises from the earth draws some inspirations from above and mutates to create some interesting moments with the interlocking of the masonry and concrete walls.

The entry gets a double height fabric scrim which is very subtly angled to announce the entry to the house and make the entry more human scale. The scrim also offers privacy to the living room and upper bedrooms from the road. The south façade has deep recessed spaces and openings that offer outdoor living and shade to the full height glass at the dining and office spaces. The dining court opening gets an operable fabric curtain which is on a wind sensor. Life energy flows from one life form to another, similarly line travels from one built form to another, for example, the bench in the office court becomes a family room entertainment cabinetry and travels north to become a barbeque counter and pool ledge. One can sit on this ledge, feet dangling in the water, back against the pool privacy wall and facing west to see the setting sun behind the west boulder wall. The line further continues to the north end and becomes a bench again under the fabric pavilion, completing the full circle of life.

This house starts with a simple square, the golden section derivative of this square extends to the south making the main house and the root 2 derivative extends to the west making the guest house. There is a man made courtyard to the south that is formed by the guest house, the main house and the lap pool leaving an open courtyard in the center. To the north of this composition is another courtyard formed by the landscape. Both these courtyards are connected. The trees of the landscape courtyard have been carefully chosen, such as grove of dense evergreen citrus trees to the west which cast a shade to the east. The trees to the east are native plants with compound leaves like Palo Verde that filter light and allow mountain views to the east. The trees to the north are sweet acacias. The trees bloom in a chronological order with the citrus flowering first and filling the air with a wonderful fragrance and white color. This is followed by ocher yellow sweet acacias and then by lemon yellow Palo Verdes. Together they create a live, ever changing painting, as an offering to the sky. 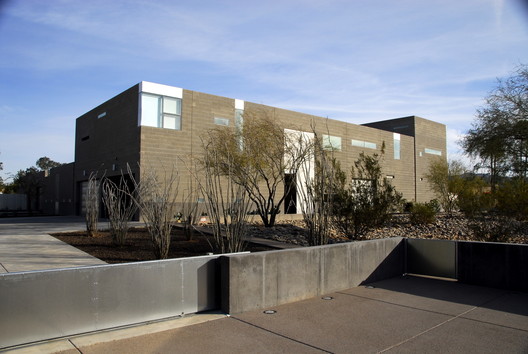