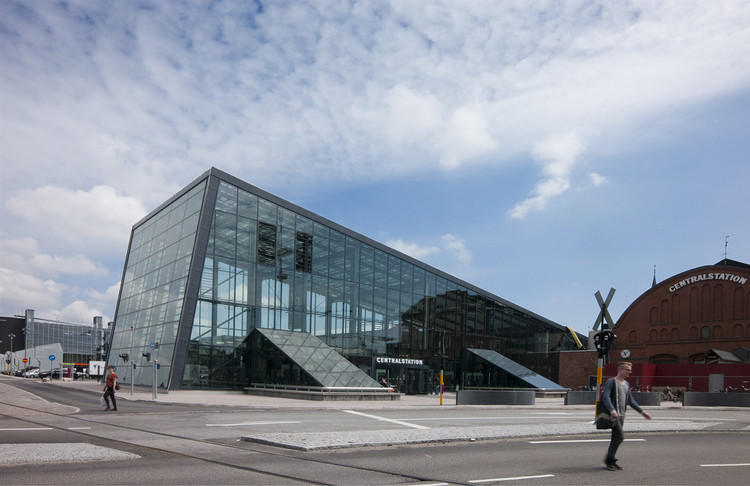 Text description provided by the architects. Malmö Central Station has always looked to move with the times. Since opening in 1858, the city’s first railway station has been rebuilt, extended and modernised to cater for changing passenger needs over the decades.

The original Terminal Building is in two sections. The smaller Green Hall was a waiting room for third-class passengers in the 1920s. The turquoise tiling has since regained its former lustre and the limestone floor is from Skånska Ignaberga. The Central Hall started out as an open platform building. Its old brick walls and herring-bone tiled floor have been carefully preserved. Beneath the domed roof, 15 shops and restaurants provide an inviting environment for people to meet and eat.

The City Tunnel, opened in December 2010, is an underground rail link connecting Malmö to the Öresund Bridge and Copenhagen. At Malmö Central Station, passengers enter the subterranean station through the Glass Hall, a 130-metre terminal that unites Malmö’s busy city streets with its elegant waterfront. It is used by 40,000 passengers every day.

With its ultra-modern glass and steel structure, the Glass Hall unmistakeably belongs in the 21st century. As such it unfurls the latest chapter in Malmö Central Station’s long history. And builds on a proud tradition of moving with the times.

Metro has been responsible for the design of all new construction and alterations at Malmö Central Station above ground. The City Tunnel is being constructed to the north of the existing Malmö Central Station. A new arrivals area is being created which is delimited partly by the new ”Glass Hall”, and partly by the new car park building to the east. The Glass Hall’s modern design contrasts with the historic building of the Central Station. Modern architecture efficiently caters for the increasing flow of people travelling, while some older parts of the station have been given a different use with a greater focus on service. Over 150 years, Malmö Central Station has been altered, converted and extended. This might therefore be viewed as a series of well defined annual rings. With the Glass Hall and the other additions being made now, yet another annual ring is being added.

NEW DIRECTION IN THE CITY

For one and a half centuries, Malmö Central Station formed a northerly limit for city planners. But the redevelopment of Malmö’s old wharves and docksides means the station is about to claim a more central position as the city’s transport hub. The new Glass Hall on the station’s north wing symbolises the city’s fresh direction. It presents a gleaming new front to the north, once the station’s unprepossessing neighbour.

THE OLD WITH THE NEW

Malmö Central Station is a protected heritage building. The original terminal is the oldest structure of its type in Sweden and it has been a major challenge not just to preserve the terminal’s original character but to enhance it. Jernhusen has worked closely with the Skåne County Administrative Board to achieve this, for instance by creating full visibility into the Train Shed for the first time through the adjacent Glass Hall.

Commuter flow is channelled through the new Glass Hall, where the materials, services and signage create an air of pace and efficiency. Steel, concrete, slate and glass set the tone. Passengers can purchase fast food and books and exchange foreign currency. Shop owners who have moved here from other parts of the station have seen their sales rise due to the prime location.

The old Central Hall has been redesigned as a covered mall with restaurants and cafés. The inviting, service oriented atmosphere aims not only to attract passengers but also lunchtime visitors working close by. The lighting is subdued and the interior draws inspiration from the Central Hall’s history.

Supporting the glass facade is a wire lattice never before used in Sweden. Designed for maximum lightness, the wires create tension to protect the glass structure from gusting winds. Suspended from the ceiling are sheets of perforated steel for sound proofing and ambient lighting. Along with the tinted glass, these design details create a calm atmosphere – despite the natural hardness of the materials used. 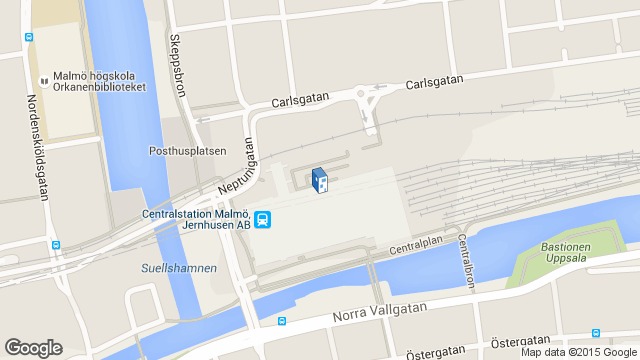 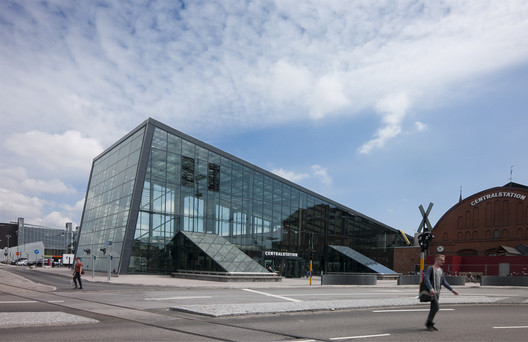